Want a plastic bag from Northmart? Pay a quarter 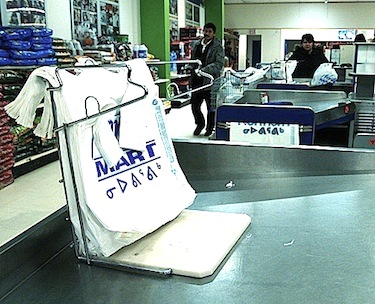 Plastic bags abound at Iqaluit’s Northmart store Jan. 10. But that could soon change: Northmart and Northern stores across Nunavut will begin charging 25 cents for each single-use bag starting Jan. 17. (PHOTO BY CHRIS WINDEYER)

Rick MacDougall, assistant manager of the Iqaluit Northmart, said the move would take effect at all Northern and Northmart stores in Nunavut.

“Like everyone else in the South and the North, we’re trying to get away from everything going into the landfill,” he said.

To help wean people off plastic, MacDougall said the North West Co. is sending out the green reusable bags, branded with the company’s logo, that it’s been selling for about two years.

“Everyone will be getting two in each mailbox, with a letter explaining the program,” he said.

Other grocery retailers in Iqaluit have already offered customers alternatives to the single-use bags that can often be seen littering city streets and which even get blown by winds onto the land and water far from Iqaluit.

Arctic Ventures instituted a 10-cent-a-bag charge in October, 2008, and immediately saw a drop of 30 to 40 per cent in the number plastic bags it handed out to customers.

Like Northern, Ventures paved the way for the new policy by handing out free reusable bags to customers first.

Baffin Canners and the Baffin Gas bar have both switched to corn-based biodegradable bags.

And all grocery shoppers in the Northwest Territories have been paying 25 cents a disposable bag since new territorial legislation went into effect in January, 2010.

Judy Mclinton, a spokeswoman for the NWT’s Department of Environment and Natural Resources said, a second phase, forcing all retailers to charge a quarter for single-use bags, goes into effect there Feb. 1.

While retailers in the NWT didn’t track bag use before the program went into effect, Mclinton said 70 per cent of grocery retailers reported a drop of 50 per cent or more in consumption of single-use bags.

Iqaluit’s mayor, Madeleine Redfern, welcomed the move, saying the charge for single-use bags can help people remember to bring their reusable ones with them when they shop.

“It’s a business decision on their part, but anything that can reduce garbage in our community should be welcomed.”

But the mayor added she’s seen stores in the South maintain “depots,” where people can drop off used plastic bags and pick them up for re-use.

“Most of us have a cupboard full of bags [and] to date there hasn’t been any place to bring them and if we could bring them back to Northmart so that people could re-use a bag, that’s another option I think I’d like to see,” Redfern said.

In 2008, city council toyed with imposing a city-wide ban on plastic bags but never went ahead the plan. Redfern said councillors are still considering a proposed bylaw that would outlaw the bags.

“The issue has not died,” she said.

With files from Jim Bell