Nunavik cops put on show of force at KRG meeting

In some communities, number of crimes exceeds population number 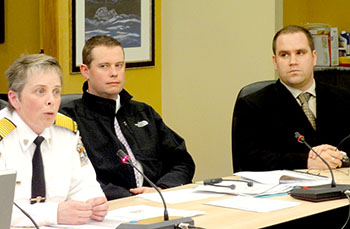 Have a tip about illegal drug and alcohol activity in Nunavik? Aileen MacKinnon, the interim police chief of the Kativik Regional Police Force came to the Kativik Regional Government council meeting in Kuujjuaq, along with investigators from the provincial police force and the KRPF, to encourage Nunavimmiut to call their local police or a toll-free number, 1-800-964-2944, with tips. (PHOTO BY JANE GEORGE)

KUUJJUAQ — A dozen uniformed police officers from the Kativik Regional Police Force and the Sûréte du Québec arrived Feb. 25 at this week’s meeting of the Kativik Regional Government’s regional council to make a symbolic show of beefed-up police activity in the region.

But the idea behind their presence at the meeting was clear: they wanted to physically highlight their efforts to seize drugs and alcohol, illegally brought into Nunavik for sale, and hopefully scare drug dealers and bootleggers from doing business in the region.

They said these seizures have an estimated re-sale value of $376,525.

This past January, police also scooped up more booze and drugs, worth about $44,000.

The KRPF’s interim police chief, Aileen Mackinnon, said the regional police and the SQ, including two new KRPF investigators as several others working with the SQ, made seizures worth a total of $1.5 million in 2009.

The total value of the drug market in Nunavik has previously been estimated at about $30 million a year.

During the police presentation, councillors received no numbers about what arrests, if any, had resulted from the KRPF seizures, although the SQ say they opened four drug trafficking files.

So it’s hard to say whether the police campaign against drugs and alcohol means drug-dealers and bootleggers will face any legal consequences or simply lose their merchandise and livelihood.

MacKinnon encouraged Nunavimmiut to provide tips to police about drug and alcohol dealing in their communities by calling 1-800-964-2644.

MacKinnon said informants will be given a number instead of a name to keep their identities confidential, or they may choose to remain anonymous.

For the moment, callers may only speak in English or French to investigators, but efforts are underway to provide service in Inuttitut.

As for Nunavik’s rising crime rates, MacKinnon said these may reflect more work by police in the region.

The population of Nunavik is only about 11,600.

Separate statistics were only provided for three categories of files opened in 2009, when there were 2,829 assaults, 253 sexual assaults and 751 cases of impaired driving.

Most the criminal offenses were linked to alcohol, MacKinnon said.

To lower these rates, the KRPF plans to increase its prevention activities, including trilingual presentations for schools on firearms safety, “drugs and you, not a healthy combination,” and drinking and driving.

The police also wants to promote its youth cadet program, with the KRG budgeting more than $2.5 million towards this in 2009.

Activities will include a camp to be held this April in Kangiqsujuaq, where 30 cadets will learn winter survival skills and first aid.

MacKinnon also said there are plans to encourage cadets to become involved in karate and to learn police patrol techniques, with the goal of encouraging more young Inuit to join the regional police force.

During their meeting with the police, councillors praised the police efforts against drugs and alcohol, which they said is eroding the quality of life in Nunavik.

They also asked for more assistance in fighting youth gangs and vandalism.

One councilor couldn’t understand why police take so long to stop dealers and bootleggers when everyone in a village can see people going to the same house to make their purchases.