An Inuk’s Plan to Find the North Pole 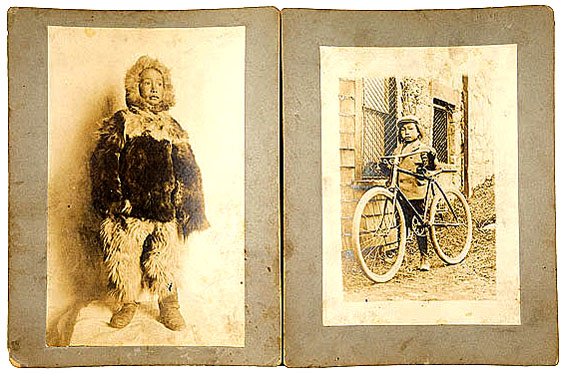 A very young Minik Wallace dressed in fur clothes (left) and with his bicycle (right.)

Minik Wallace, seen here with his dogs while on the Crocker Land Expedition, in 1909 proposed a plan for an all-Inuit trek to the North Pole.

In early January of 1909 the Arctic Club of America met for its 15th annual dinner at the Hotel Marlborough in New York.

The club, a loose affiliation of men interested in the Arctic and its exploration, had been founded by those who had gone north in the summer of 1894 on Dr. Frederick Cook’s disastrous Miranda expedition, an accident-ridden tourist voyage to Greenland. The club had grown in the 15 years since its formation and its members were all successful men.

Professor William Brewer and Admiral Winfield Schley, who in 1884 had commanded the party that had gone to the relief of the Greely expedition, spoke enthusiastically that night about the expedition they were planning to send out that summer in search of Dr. Cook. Cook had gone north in 1907 as a rival to Peary on his own search for the North Pole, and had not been heard of since.

A young Inuk was in attendance that night. Minik Wallace had been taken to New York by Robert Peary in 1897 and had remained in the city since then. He was now in his late teens. Often invited to attend the club’s meetings, he was sometimes asked to come dressed in his furs, a kind of living Arctic attraction.

Minik listened with rapt interest to the plans for the Cook relief expedition. It was no secret to members of the club that Minik was sceptical about white explorers’ efforts to reach the top of the world and that he had formulated some ideas of his own about the North Pole.

Educated in New York, separated from his own people for a decade, he had read voraciously everything he could lay his hands on about the Arctic, and particularly the expeditions that had gone to his Arctic, northwestern Greenland, in search of the Pole.

He had concluded that neither Cook nor Peary nor any other white explorer would ever reach the North Pole, because their methods were all wrong.

Bu he had gone a step further. He had conceived a plan for an all-Inuit expedition to the Pole. His guardian, William Wallace, had once claimed, “Our object had been to educate him to be an explorer, for it had always been his theory and ours that if anyone reached the pole it would be an Eskimo.”

Minik explained his plan, with cutting sarcasm for the methods used by the most recent spate of Arctic explorers. His frankness, as reported in a newspaper article some time after the Arctic Club’s dinner, must have made the club’s members cringe with uneasiness.

“The explorers who are trying to find the North Pole now don’t know how to do it,” he claimed.

“They fit out nice comfortable ships, take along a number of useless passengers to eat up their provisions and sail as far North as they can in one summer and passively wait until they are frozen in. Then they while away a winter eating up their provisions until summer comes again, when they make a so-called ‘dash,’ in which they sometimes cover as much as a mile a day, going as far as they can in half the summer. The other half of the summer is spent in beating it back to their ship before the Arctic winter becomes too severe. Then they return to the United States in a blaze of glory, announce that the pole is to be discovered ‘not yet, but soon,’ and start out on a long and profitable lecture tour, telling why they failed and how they will surely succeed next time.

“The North Pole will never be discovered in such a way. The man who finds it will go as far as he can in one season and make a permanent camp there until the next season. Then he will continue on his journey, and in such a way he must succeed. That’s what I want to do… I want to be the first man to find the Pole, so that the honor will go to one of my own race.”

Minik returned north that summer only to learn that both Cook and Peary were claiming to have reached the North Pole. He never achieved his dream of his own polar expedition.

In 1916 he returned to New York. He claimed to have a story to tell about both Cook’s and Peary’s efforts. He offered to sell his story for a million dollars. There were no takers.