At city hall, voices in your head will soon come in more clearly 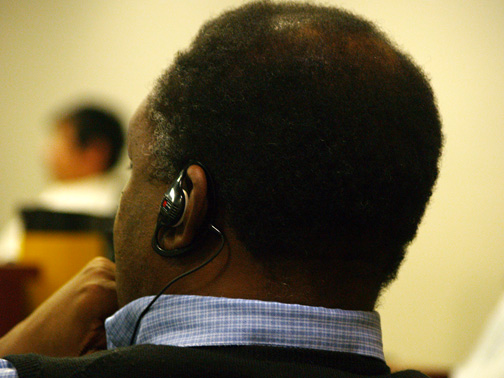 John Mabberi-Mudonyi, the City of Iqaluit’s director of finance, listens to council proceedings through an earpiece Oct. 27, 2009. During that meeting, councillors voted to spend $75,000 on a new audio system for city hall’s council chambers. (PHOTO BY CHRIS WINDEYER)

Communicating across languages at Iqaluit city council meetings is about to get easier.

Councillors voted Tuesday to spend about $75,000 to upgrade city hall’s in-house audio system, which is plagued with sound quality so poor it often sounds as though translators are coming in over a CB radio from Mars, rather than a booth next to the council chambers.

“This council has been in this room for three years, and each time, we’ve had problems with the audio system,” said John Hussey, the city’s chief administrative officer.

The request for decision also says the package will include upgrades to the council chambers’ obsolete video equipment that will allow city hall to broadcast on the new digital cable system as well as the internet.

Hussey told councillors the public has demanded that city hall be more open, and the upgrades are one way to do that.

But Coun. Jim Little, who lost a bid for mayor during the Oct. 19 civic elections, complained that the city should have sent the contract through a tender process instead of issuing a sole-source contract.

Hussey responded that few companies do this sort of work and that building an audio system piece by piece would be more expensive.

Coun. Jimmy Kilabuk the audio system in council chambers was just as bad when he was on city council in the late 1990s.

“This is very good news,” Kilabuk said through a scratchy-sounding translation. “This is an old building and sometimes it feels like we’re sitting in a box when we’re having a meeting.”

Officials say Iqaluit ultimately needs a new city hall to replace the current building, while also houses the Arnaitok Arena and the city’s fire department. Staff have complained in the past about fumes wafting up from the garage when fire trucks start up, and the chambers are small, with little room for the public, media and staff.

In a 2006 plebiscite, ratepayers rebuffed a proposal by the city to borrow $6 million for a new city hall.

With a new city hall likely years away, Coun. Claude Martel, in his last meeting after losing a re-election bid to council, said the city should fix its festering audio problems.

“This should be in Jurassic Park,” Martel said of the earpiece of his portable headset. “I don’t care where it [the new system] comes from. It’s got to be done.”

The vote passed 4-1, with Martel, Kilabuk, Allen Hayward and David Alexander in favour. Little voted against the motion. Simon Nattaq, who was re-elected Oct. 19, and Glenn Williams, who wasn’t, were both absent. The Oct. 27 meeting was the last for the outgoing council.

Hussey said work on the new system could begin before the new council meets for the first time Nov. 10, and should be finished early in the new year.