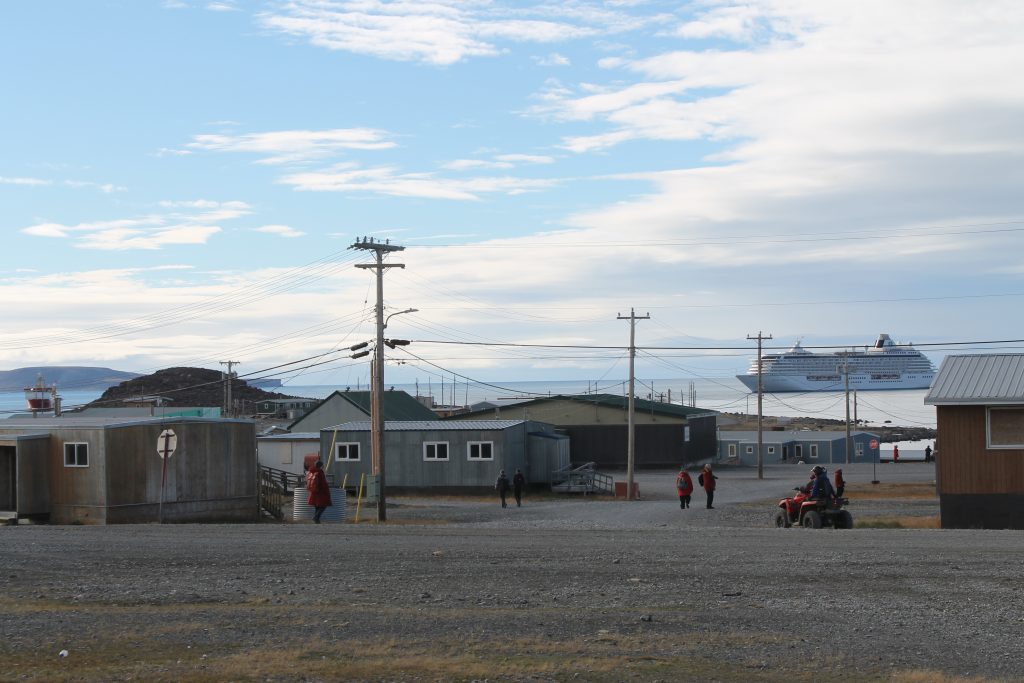 There have been moments that signalled a change in how Arctic waters would be used.

There was the 1,600-person cruise ship, the Crystal Serenity, that crossed the Northwest Passage in 2016.

The largest-ever vessel to make this voyage, it did so with much fanfare—and criticism—as the region opened up to a much larger share, and grandiose type, of tourism.

Cruise ship transits through the Canadian Arctic had already doubled between the 2005 and 2006 seasons,but that’s not nearly as flashy as the 13-deck luxury liner moored in Queen’s Bay off Ulukhaktok.

This year, 17 expedition ships visited Pond Inlet on north Baffin Island. The largest among them carried just under 500 passengers.

That was the MS Roald Amundsen: another mark of change on Arctic waters, it was propelled by a hybrid engine.

Operated by Hurtigruten, a Norwegian cruise and cargo company, the Roald Amundsen has four diesel engines and two batteries that cut emissions by 20 per cent, according to the company.

And the company has three more retrofits of vessels in the works. But while battery-diesel hybrids work for cruise ships and ferries, longer voyages are still beyond a battery’s store of power.

“What we’re seeing is there are some operators that are willing to make those commitments and investments,” he said. “But we need more ambition within the industry.”

HFO is cheap, viscous oil that lingers long after a spill and emits more black carbon than any other fuel type.

Black carbon emissions are a particular concern in the Arctic because, after being emitted, these particles settle on the white polar snow and ice, darkening its surface to absorb more sunlight and speed up the melt.

The impact of black carbon in the Arctic is five times that of its effect in the south, said Dumbrille.

In 2017, 7.6 per cent of all black carbon emissions in Canada—or 2,761 tonnes—came from marine transportation, according to the federal government. Comparatively, air transportation contributed 1.9 per cent—or 704 tonnes.

HFO is currently banned in Antarctic waters because of the environmental impact, and the Arctic Council has called for a similar ban in the North.

This has been delayed in large part because of concerns about increasing the already-high cost of living in remote Arctic communities.

Despite this, Nunavut Tunngavik Inc. passed a resolution last October calling on the federal government to ban “the use, carriage and transportation” of HFOs in Arctic waters.

The motion was moved by Charlie Lyall and seconded by Stanley Anablak, who come from communities along the Northwest Passage where the issue of cruise and cargo ships fuelled by HFO hits home. 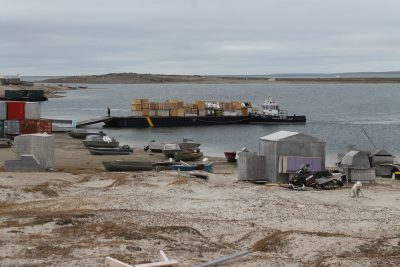 Sealift cargo is unloaded from a barge in Gjoa Haven in 2017. An increase to the already high cost of living in the North has been the argument against a heavy fuel oil ban for marine transportation, since so much is brought into Arctic communities by sea. (Photo by Elaine Anselmi)

The financial impact on Arctic communities remains an issue to grapple with, but recognizing the environmental impact, the Inuit Circumpolar Council of Canada has also reissued a call for an HFO ban.

“As the IPCC [report] points out, immediate measures are needed to curb black carbon emissions and prevent risks of spills of heavy fuel oil in the Arctic waters,” said Lisa Koperqualuk, ICC-Canada vice-president, in response to the Sept. 25 release of the Intergovernmental Panel on Climate Change’s report on the state of the world’s oceans and ice cover.

“With increased shipping passing through the Arctic waters of Inuit Nunaat comes the need to protect the marine ecosystem, which is part and parcel of our lifestyle and culture.”

According to numbers from the Scott Polar Research Institute, there have been more transits by large commercial vessels in the Northwest Passage this year than ever before.

What is being done

The International Maritime Organization is cracking down on emissions globally, requiring all ships to use fuel with a sulphur content of less than 0.5 per cent, versus the current limit of 3.5 per cent, by 2020.

The low-sulphur fuel regulation has come to be known as LSF2020.

An allowed alternative to switching to low-sulphur fuel is installing an exhaust gas cleaning system.

Colloquially known as scrubbers, these systems use an alkaline solution to remove acidic pollutants in exhaust, such as sulphur, before it’s released into the air.

But the vast majority of scrubbers operate on a system where the solution that pulls chemicals from the exhaust is then dumped into the ocean, which various studies have shown to be harmful.

Scrubbers also have a limited effect on black carbon, whereas switching to diesel fuel cuts emissions by 30 to 80 per cent, said Dumbrille.

And while a switch from HFO to cleaner fuel might sound like a lofty, pricey task, in fact many ships already do it.

With the establishment of Emissions Control Areas in 2012, capping nitrous oxide and sulphur emissions in most North American waters (as well as the North Sea, Baltic Sea and Caribbean), ships have to either switch to a more expensive, cleaner fuel or use scrubbers.

They then switch back to the cheaper HFO when out of the controlled areas.

Since 1993, Hapag-Lloyd has avoided using HFO on its Arctic cruises and, this year, voluntarily switched all of its cruise ships to marine gas oil with a sulphur content of 0.1 per cent—even less than the IMO-mandated limit.

But in terms of its massive fleet of cargo freighters, the company had a different take on the new requirements. 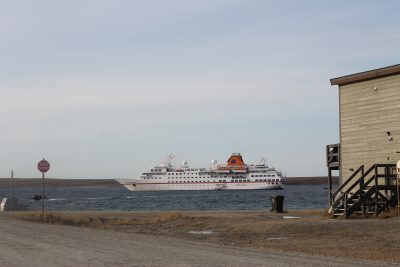 Hapag-Lloyd has used only low-sulphur fuels in cruise ships in the Arctic since 1993. Here, one is anchored off Cambridge Bay in 2017. (Photo by Elaine Anselmi)

“The LSF2020 emission regulations mean ships will have to significantly reduce emissions on the high seas as well as in coastal areas. This change does not only concern Hapag-Lloyd but it challenges the entire shipping industry,” reads a statement on the company’s website.

“The good news is however: Thanks to the regulations, the industry will become much greener.”

The company’s statement goes on to cite industry experts who figure the cost of compliant, low-sulphur fuel would be between US$150 and US$250 (C$200 and C$330) more per tonne than HFO.

Shipping cost was a factor WWF-Canada considered in its final submission to Baffinland Iron Mines Corp. on its second phase of development at the Mary River mine.

The report included figures on the estimated cost to the mining company to require its contractors to switch from HFO as Baffinland ramps up its shipping program from the north Baffin Island site.

The study took into account Baffinland’s shipping data from 2017, and an estimate of their revenue for the year from the average cost of ore and the amount they produced and shipped.

“Depending on the cost of diesel and HFO at the time, one likely scenario is it would be 0.3 per cent of their revenue for that year to comply with an HFO ban,” said Dumbrille.

“What we’ve been saying is, it’s negligible when you’re looking at $287 million in revenue,” said Dumbrille.

Baffinland has garnered significant attention for its shipping plans as it presents the most significant shipping growth in the Canadian Arctic right now.

“With phase two, it will take a huge jump in transits—from 180 transits to over 400 transits,” he said. “Four hundred transits was the entire amount of Arctic voyages four or five years ago.”

With that, he said, Baffinland has the opportunity to showcase how sustainable shipping can be done.

“Speed restriction is a good example of that,” said Dumbrille. A 10 per cent reduction in speed can reduce CO2 emissions by 20 per cent—a short-term measure to meet climate targets.

“There’s no regulation around speed for ships in Milne Inlet and Eclipse Sound, but Baffinland said, ‘Our operations will go nine knots,” said Dumbrille.

From marine mammal observers to limiting ice-breaking and use of carbon fuels, he said, there are many good current and potential sustainable options for shipping in the Canadian Arctic.

And as big as Baffinland is—and continues to grow—it’s their standard to set.

“They’re breaking the mould with shipping and development in the Arctic,” said Dumbrille. “A lot of eyes are on the project and people are looking to it to set an example.”