Requiring civil servants to learn Greenlandic could help preserve the language — but critics warn it could make filling positions harder. 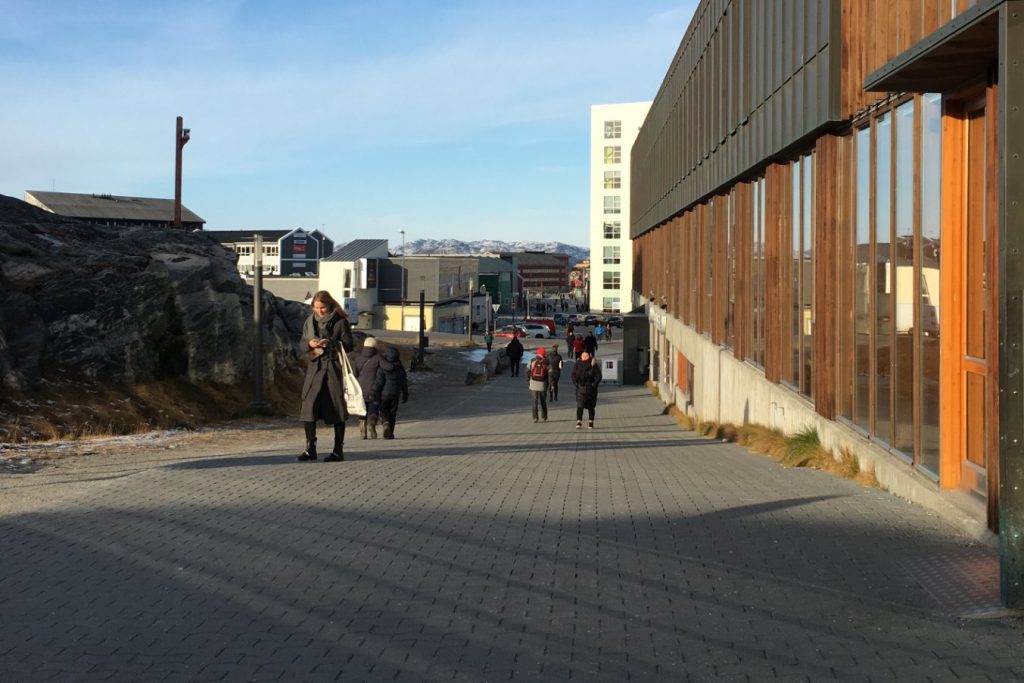 Few subjects are more sensitive in Greenland than the question of language, but a few days ago Greenland’s premier cut straight to the bone.

Writing in Greenland’s main political newspaper Sermitsiaq, Kim Kielsen, head of Naalakkersuisut, Greenland’s Self-Rule Authority, suggested that all new public employees who do not speak the local language must henceforth take language courses and pass exams at a certain pace or lose their job. Read my lips: Learn the language or get out.

The suggestion came on the heels of a separate suggestion by Siumut, Kielsen’s party, to reserve the right to vote in Greenland to people who have lived there for two years or more. As it is, Danes and Faroe Islanders who have lived in Greenland for just six months may vote in local elections, but Siumut wanted to restrict this. This suggestion was soon scrapped since it seemed to violate basic rights, but it helped paint a pattern.

Together the two suggestions underscore how some among Greenland’s governing circles seek further and faster decolonization. They also illustrate, at least to my reckoning, how appeals to those who wish for greater distancing from the old colonial power Denmark are still considered supreme as means to garner political support in Greenland: Later this month Kim Kielsen is up for re-election as chairman of Siumut, Greenland’s main governing party.

More interesting, however, is how Kielsen’s suggestion is likely to meet both controversy and support in Greenland. To some critics, his move will seem offensively focused on ethnicity and based on yesteryear’s perception that Denmark is the source of most evil in Greenland. These critics will find the language requirement likely to scare sorely needed foreigners from seeking a job in Greenland’s public sector.

Aaja Chemnitz, a member of the Danish Parliament for Inuit Ataqatigiit, the main opposition party in Greenland, aired her distaste for the proposal, also in Sermitsiaq: “These are nationalistic suggestions that focus on who are Greenlandic and who are not. Who may vote at the elections and who may not. It is a sad tendency, where you exclude people because of their ethnicity instead of assessing with which skills they contribute to society. This is worrying. The number of people in Greenland is not growing and there is no doubt that the political signals now sent from Greenland are noted by those who might otherwise consider moving there,” she said.

Chemnitz may possibly be thinking here not only of foreigners but also of the many young Greenlanders who study abroad. They are badly needed back home, and much effort is put on luring them home after their education. At least some of those outlooking youths may find it hard to match their desire to see Greenland fully engaged with the international community with the seemingly nationalist tendencies the critics find embedded in Kielsen’s suggestion. In Greenland, as elsewhere, the national language is deeply cherished, widely recognized as key to the nation’s pride and identity, but any suggestions that it should be used as a means to exclude those who do not master it are instantly divisive.

Some locals will probably be wary that Kielsen’s plan will fuel further ostracizing of Greenlanders who speak Danish better than Greenlandic, or only Danish. Members of this sizeable group have previously complained of exclusion and discrimination. Introducing his plan in Sermitsiaq, Kielsen wrote of this group as victims who have had their language taken away from them during colonial times by ill-informed parents, and how their inability to speak Greenlandic “is driving a wedge through society.”

He suggested that by making language learning tools freely and widely available, “this group will have better options for winning back their lost language, so that together we may heal one of the wounds from the colonial time.” Not all included are likely to appreciate such categorizing.

Kielsen introduced his plan as a means to handle in particular an expected increase in the number of foreigners in Greenland. In particular, the ongoing construction of two large new airports and the prospect of more mining operations make it inevitable that more foreigners will come to work in Greenland. Kielsen suggested that free language courses should be available online for all preparing to move to Greenland.

My guess is that only a few of his compatriots will object to this part of Kielsen’s plan. Rather, it is his suggestion that language training and proven progress should be obligatory for all future public servants that will provoke controversy. 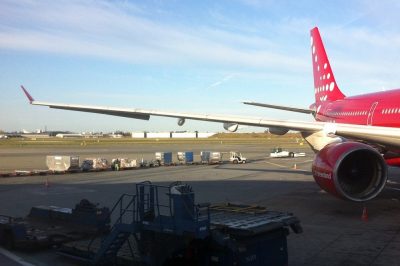 Air Greenland’s Airbus A330, which flies its route between Copenhagen and Kangerlussuaq, is prepared for departure. Airport expansions and the prospect of more mines, are likely to bring more foreigners to Greenland. (Kevin McGwin)

To understand the background, I asked for scholarly interpretation: “In principle, I think it sounds reasonable to make certain requirements,” says Arnaq Grove, an associate professor with the Institute of Language, Culture and History at Ilisimatusarfik, the University in Nuuk. She recognizes fully the potential biases, but she also points to periods in Greenland’s colonial past, where a pragmatic approach to nationalism and the restoration of Greenlandic culture and customs in her view became a means to build bridges, not to divide:

“I think one should take an interest in the language of the place one chooses to live and in the culture behind it,” she tells me on the phone from Nuuk.

In 2009, with the latest revision of Danish-Greenlandic relations, Greenlandic became by law the only official language in Greenland. In 2010, to follow up on this pivotal change, legislation in Greenland stipulated that room must also be made for both Danish and English in the educational system and in public life. Grove strongly recommends more strategic efforts to educate the necessary number of skilled language trainers and scholars, also to safeguard the continued development of Greenlandic that might otherwise get squeezed between the two foreign languages. As it is, Grove tells me, many foreign terms are not fully integrated into Greenlandic and the teaching of proper Greenlandic suffers.

In the short term, she foresees practical problems if Kielsen’s plan is to be implemented fast, since language teachers are scarce, but requirements that newcomers pick up some local language are not alien to her. She is presently helping to develop related requirements for future staff at the university.

Some supporters will find Kielsen’s suggestion only logical and long overdue. In the 18th century, when Denmark’s colonization of Greenland took speed, Danish became the all-pervasive language of influence, learning and power in Greenland, even if most still did not speak it. 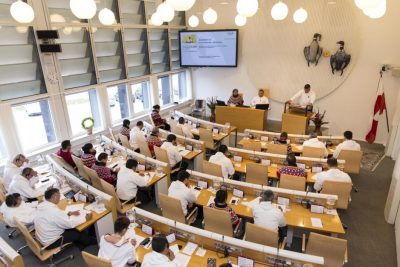 Today, Danish is still widely used — too widely for some — in Inatsisartut, the parliament, in governmental departments in Nuuk, in the municipal administrations, in all institutions of higher learning, in the health sector where most doctors are still Danish, in the publicly owned companies and so forth.

Add to this that about 50 percent of the 57,000 people who live in Greenland do not speak Danish or speak it only rudimentarily and you will understand why the question of language has been key and center to public discourse on identity, power and discrimination in Greenland for generations.

“Greenlandic is our official language, but all public communication is still translated from Danish,” Grove tells me. She grew up in one of Greenland’s small and scattered villages; the overwhelming majority in these settlements do not speak Danish, nor other foreign languages. Studies made by Grove’s students document that many Greenlanders, even many with bilingual skills, need or ask for a translator when confronted with the many Danish doctors in Greenland; it is when one is most vulnerable that communication is most sensitive.

“Those of us who are educated sometimes forget how things are, but yes I do think quite a lot of people are in fact angry, or at least resigned to what they see as the inevitable,” Grove says.

To me, as an outsider who does not speak the language but visits as often as possible, the inherent dilemmas are all too familiar. In the main towns, it is relatively easy to get by without Greenlandic. Most educated Greenlanders speak Danish or English. In the larger centers, Danes are so numerous they form their own separate communities, involuntarily distanced from the rest of society by their inability to speak the language; an inability that often goes hand in hand with higher-than-average incomes, nicer houses and other privileges.

The continuation of this conundrum is due mostly to a dire lack of sufficiently educated, Greenlandic speaking administrators, economists, lawyers and other professionals. This lack of Greenlandic speaking educated personnel necessitates a constant import of labor — mostly from Denmark — which is expensive and often frustratingly inefficient. After a year or two most of the imports take off again, leaving the more permanent staff with yet another problem and little to add to institutional memory; the dilemma is well known particularly in healthcare and much present in these days of the corona-pandemic. Kielsen’s suggestion addresses a widely recognized, long standing problem.

No easy solutions are at hand of course; most point to the educational system for betterment, but improvement will not come fast. Some critics, frustrated by the lack of progress, accuse the political milieu in Nuuk of being too mentally immersed in the old colonial ways to look for faster ways out. These critics will probably find Kielsen’s suggestion reasonable, perhaps even elegant ,as it seems to offer measurable progress without hurting those already employed in the public sector and a relatively lenient way out for future public servants without Greenlandic: take a free language course.

Introducing his plan, Kielsen argued that it would help save much needed resources. Translating puts a significant burden on the public administration, especially since all key documents must be available in Greenlandic, the official language. Finally, he hinted at continued threats to Greenlandic as the national language:

“Over the next two decades our country will once again change dramatically, but how it will look in 2040 depends very much on the political decisions we make. This is why it is crucial that we make sure that Greenlandic continues to be the language we all have in common,” he wrote.