“I feel more like a proper citizen of Nunavut, and have never felt more proud” 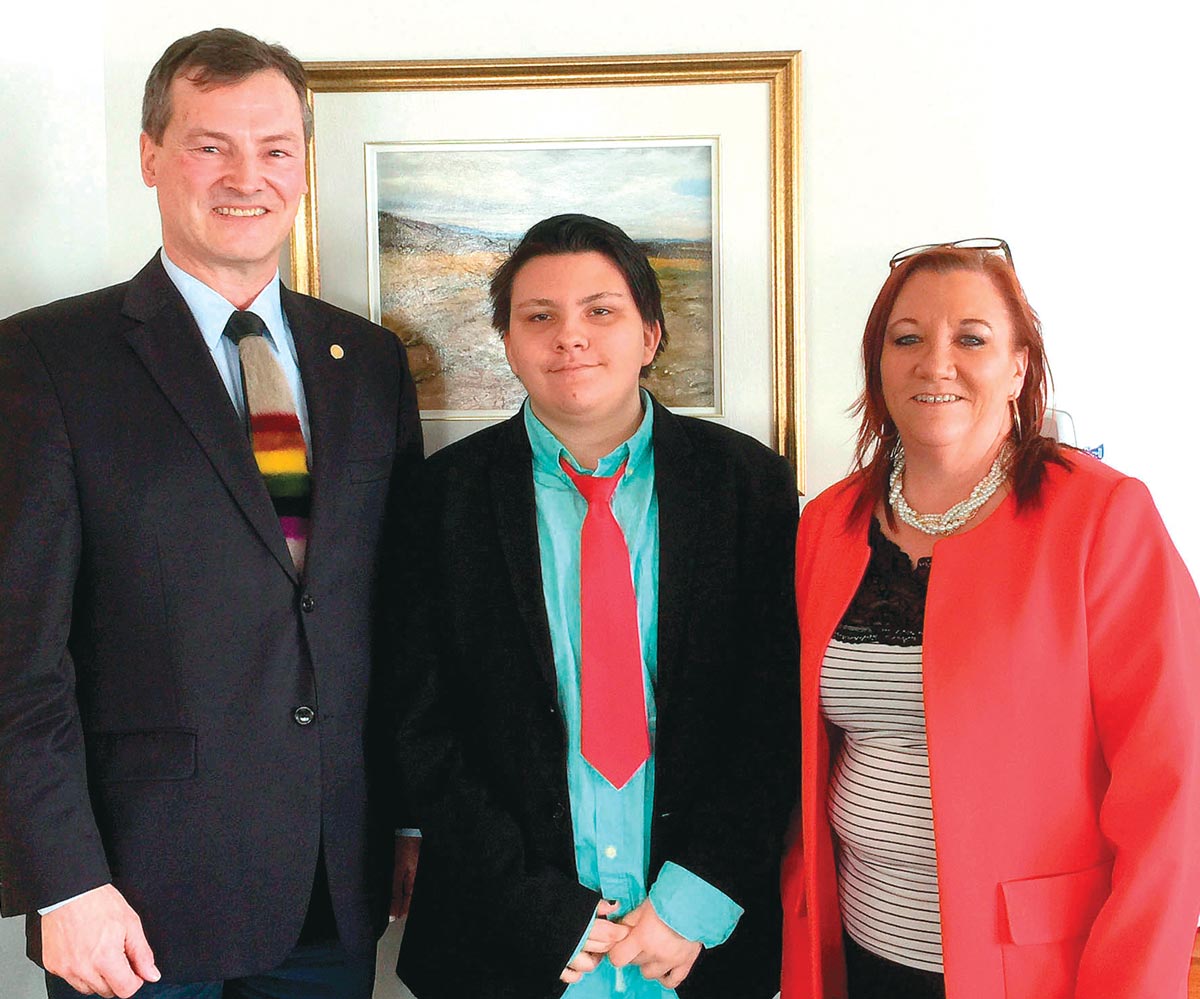 Kieran Drachenberg, then 17, with his mother, Catherine Lightfoot, at the Nunavut legislature with Keith Peterson, then the justice minister, on March 13, 2017. That’s the day Nunavut MLAs voted unanimously to amend the Nunavut Human Rights Act to protect transgendered people from discrimination. Drachenberg was later honoured for contributions to mental health. (Photo by Steve Ducharme)

We’re celebrating Nunavut’s twentieth birthday by reviewing the territory’s successes and its challenges in areas ranging from music and the visual arts to the economy, the state of Inuktut and climate change. Some notable Nunavummiut have shared with us what the territory means to them and the changes they’d like to see over the next 20 years.

Imagine that you had no rights. That people were legally allowed to discriminate against you for employment opportunities, among various other forms of discrimination, and that this was considered legally allowed, all on the basis of you being who you are and for how you were born.

It sounds like something from many years ago, but this was the reality for any person who identified as transgender in Nunavut up until March 13, 2017.

Up until that point, gender identity and gender expression were not covered in the human rights act of Nunavut.

Several words cover how this felt to me at the time: outrage, disbelief and hurt.

It’s almost entirely indescribable, though, to explain the level to which it hurt me to know that there were people who genuinely believed I did not deserve basic human rights on the basis of my identity, a part of me that cannot be changed nor altered.

I could very well hide who I was, certainly, but what is a life lived hiding who you truly are from society, the ones you love and, most important, yourself?

Growing up, I always knew there was something distinctly different about me compared with my peers. Not in a bad sense, no—I am of the firm opinion that differences should be celebrated. But in the sense that there was just something setting me apart.

I liked both “girl” things and “boy” things, but beyond that, on a deeper level, there were strange things I couldn’t quite explain for the longest time.

I didn’t understand why I always mentally categorized myself with the boys, and I couldn’t wrap my head around why I had dreams of waking up having been born a boy, and why those dreams would leave me crying in the morning before school.

It was something unshakeable, a part of me that was so undeniably evident to myself, and yet so mysterious.

For a long time I was unwilling to explore this part of myself. I felt wrong. As though this part of me was “bad,” and even, at times, “immoral.”

I saw on TV shows and even in my real life that people who felt this way were often ostracized. Boys who liked girl things were teased, and girls who liked boy things received much of the same treatment.

So I tucked it away, neat and cleanly into a little metaphorical box that I shoved under my bed.

It wasn’t until some time in my pre-teen years that the box was reopened. The father of a close friend of mine came out as a transgender woman. I didn’t understand what it meant. What was transgender? What did any of that mean?

I, of course, turned to my parents in this confusing time for guidance and knowledge. My mother explained to me what it was, with no shame or hesitation on her part.

She had always been open with me about the existence of LGBTQ+ individuals, and even later took me to LGBTQ+ events to help me understand such a thing.

When she explained it, a switch flipped in my brain, and suddenly everything made sense. It was like a part of me that I’d been denying for so long burst out from within me, screaming and sobbing because it finally all made sense.

I wasn’t wrong or immoral or horrible for feeling how I felt—there were people exactly like me, who felt this pain daily, who knew that they were different and took pride in this difference.

Being a child of the new age of technology, I turned to the internet next. I explored forums, watched videos, read blogs and spent many hours sitting in my room crying. Tears of pain and tears of joy, sometimes both at the same time. Nothing had ever felt so right in my life.

Of course, it took many years for me to gain the courage to come out. A part of me knew my friends, my family, everybody in my life that I cherished would accept it. It’d be more unlikely that they wouldn’t have.

But a part of me remained afraid, because of the what-ifs and the possibilities that I couldn’t predict. It was in my mid-teens that I finally came out.

I had long expected that even if my friends and family accepted me, not everybody would. A part of me, cynical and mostly just afraid, expected my peers to not understand. To judge me, or to even hate me for something beyond my control.

But I was pleasantly surprised to find that it was quite the contrary—many embraced it, accepted it without a bat of an eyelash, only asking questions when they weren’t sure of how to be respectful. I don’t believe this would have been my experience had I lived anywhere other than Iqaluit.

Now, my rights are protected under the Nunavut Human Rights Act. I feel more comfortable with myself and the community I live in now that this is so.

I feel more like a proper citizen of Nunavut, and have never felt more proud of where I live. It solidifies for me that Nunavut is my home, and that the people here are people whom I can call family and friends.

Kieran B. Drachenberg has been a passionate activist from a young age, and is now involved with ensuring both the rights of LGBTQ+ people and of those suffering from mental illness.