Acclaimed American choir slammed for use of Inuit throat singing 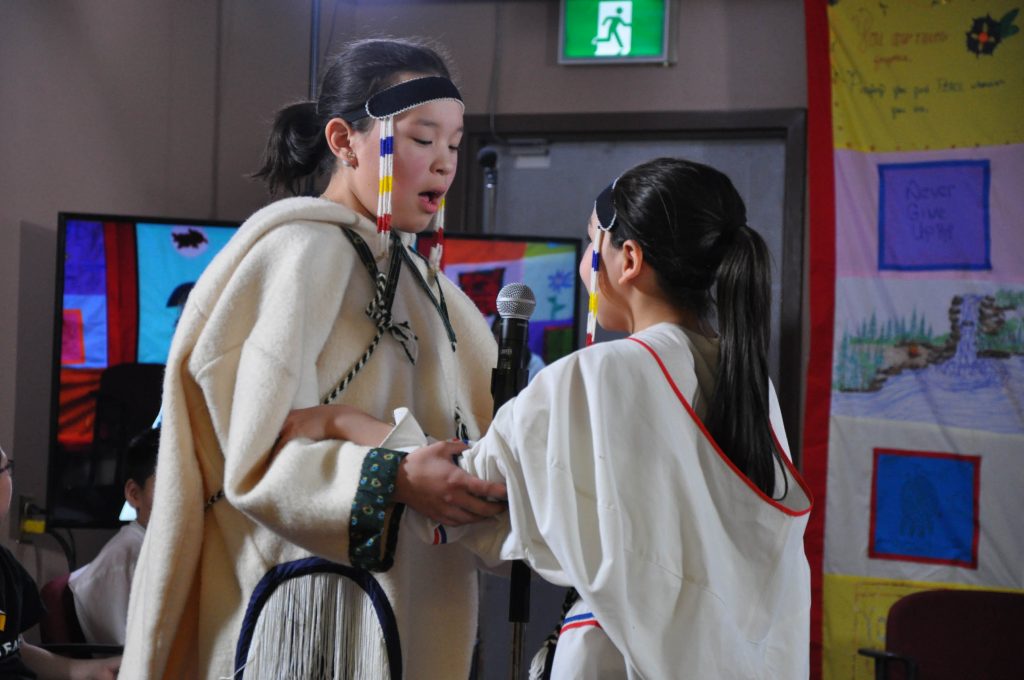 Inuit throat singing is passed from generation to generation of Inuit: here, Grade 5 and 6 students from Simon Alaittuq School throat sing in February 2018 at hearings held by the National Inquiry into Missing and Murdered Indigenous Women and Girls in Rankin Inlet. (File photo)

An acclaimed choir from the United States says it wants to “support the important work of Indigenous resurgence.”

The statement issued late Tuesday evening by a vocal group called Roomful of Teeth, came after Tanya Tagaq, the award-winning Inuit performer, said they had no business integrating Inuit throat singing into their work—especially without attribution.

Now the group says it will, among other things, immediately “find opportunities to amplify and support performing artists” of throat singing, and other Indigenous musicians with whom they work, “in concrete and monetary ways.”

The Roomful of Teeth, which has been praised by the New Yorker magazine for “revolutionizing choral music,” widely performs a choral work called Partita for 8 Voices, composed by its mezzo-soprano Caroline Shaw.

But the group came under fire recently from Tagaq about their use of throat singing, or katajjaq, which comes from a long oral tradition among Inuit women, and can be heard in the composition. The piece has won two noteworthy awards: a 2012 Grammy award, as well as a 2013 Pulitzer prize.

“Over the past two weeks we have received multiple messages from members of the Inuit community explaining that our singing in some passages comprises katajjaq and is, therefore, offensive,” the group’s statement said.

“This was not our intent. In fact, we understood our music nested in these patterns to be sufficiently distinct from katajjaq  to constitute something new. But thanks to the many voices we have heard in the past two weeks we understand that we cannot be the arbiters of that distinction. We have work to do.”

Tagaq, backed by other Inuit women, had spoken up on social media to condemn the composition and Roomful of Teeth for its lack of recognition of Inuit and their throat-singing tradition.

On Twitter, where she has 35,000 followers, and on Instagram, where about 17,000 follow her, Tagaq tried to explain why the use of throat singing is wrong in the Partita for 8 Voices.

“This is appropriation. The third movement (at about 12 min.) is entirely based on Inuit throat singing. Specifically the Love Song,” Tagaq said on Twitter.

“No Inuit are named as composers, no Inuit hired. At least credit the Inuit who taught you as composers so they too can benefit and book more gigs to put food on the table.”

Tagaq said “taking from poor brown people and siphoning it into white throats and profiteering is wrong,” asking the group whether any of the appropriated cultures benefited financially from the various performances of the work.

In the Partita for 8 Voices, you can also hear Tuvan throat singing, from the Tuva Republic, which is part of the Russian Federation.

In a long thread of postings on Twitter, Tagaq said it’s important for the classical world to know that minorities have intellectual property rights, too—”because we are equals.”

The World Trade Organization defines intellectual property rights as “the rights given to persons over the creations of their minds.”

Tagaq said the best way to know whether it’s a good idea to include a culture’s intellectual property is to consult with the source of the “creative artifact.”

But the classical world can be very short-sighted on this, she said.

“There were times where I was invited as a collaborator and gave my own compositions vocally only to have my ideas shut down and my voice chopped up and not be credited as a composer,” she said.

The only way to resolve this is to credit those who taught you as co-composers and give them a royalty split OR remove Inuit throat singing from the pieces. You should also consider what other cultures are being appropriated in the pieces.

The lengthy, and sometimes acrimonious, online discussion included tweets and Instagram posts deleted by the Roomful of Teeth, whose founder later came back online to defend its use of throat singing.

Founder Brad Wells said, “We compensate our teachers and we credit them on our website, in our programs and on our albums. I agree we can do more and better.”

The composer of Partita with 8 Voices, Caroline Shaw, said she, not Tagaq, should have “had to perform the emotional and intellectual labor of shining light on this issue” of giving appropriate credit.

“That work is my responsibility, and it is clear to me that I’ve neglected it,” she said.

In their statement issued on Tuesday, Oct. 22, Wells and Shaw said they would “immediately” do the following:

Other Nunavut performers and artists had also joined in the social media discussions about the use of Inuit throat singing, including Laakkuluk Williamson Bathory, Alethea Arnaquq Baril and Kelly Fraser.

You need to credit the throatsingers. Thats all. Pay them, give them backpay, like its that simple. We see you didnt credit them in your work and you probably arent giving them royalties. GIVE THE PEOPLE WHAT THEY DESERVE

Tagaq and Fraser were among the Inuit artists who boycotted the 2019 Canadian Indigenous Music Awards over concerns around cultural appropriation.

Along with throat singer Kathleen Merritt (Iva), they said they wouldn’t participate in the awards until the organization that runs the event, the Manito Ahbee Festival, addressed the use of throat singing by a non-Inuk Cree, Cikwes, whose album was  nominated as best folk album at the awards.

“I have advocated for Inuit rights on my own for so long, and now a few of us Inuit women have gotten together and it feels good,” she said when contacted about the various posts about the contested choral work.

Tagaq said she plans to have an Inuit throat-singing choir for the stage version of her award-winning book, Split Tooth. The production will feature “actual factual real live Inuit,” she said.

In response to the Roomful of Teeth’s statement, Tagaq said on Twitter late Wednesday that it “smells of lip service and inaction.”

Tagaq remained critical about the Roomful of Teeth’s promise to acknowledge Inuit.

“So you will read aloud before every show that you are appropriating songs? Or will you just speak of Inuit being generous or give an anthropology class at the top of the show,” said Tagaq, who, like some other commenters online, suggested that future proceeds from Partita for 8 Voices could go to a charity that focuses on helping Inuit artists.