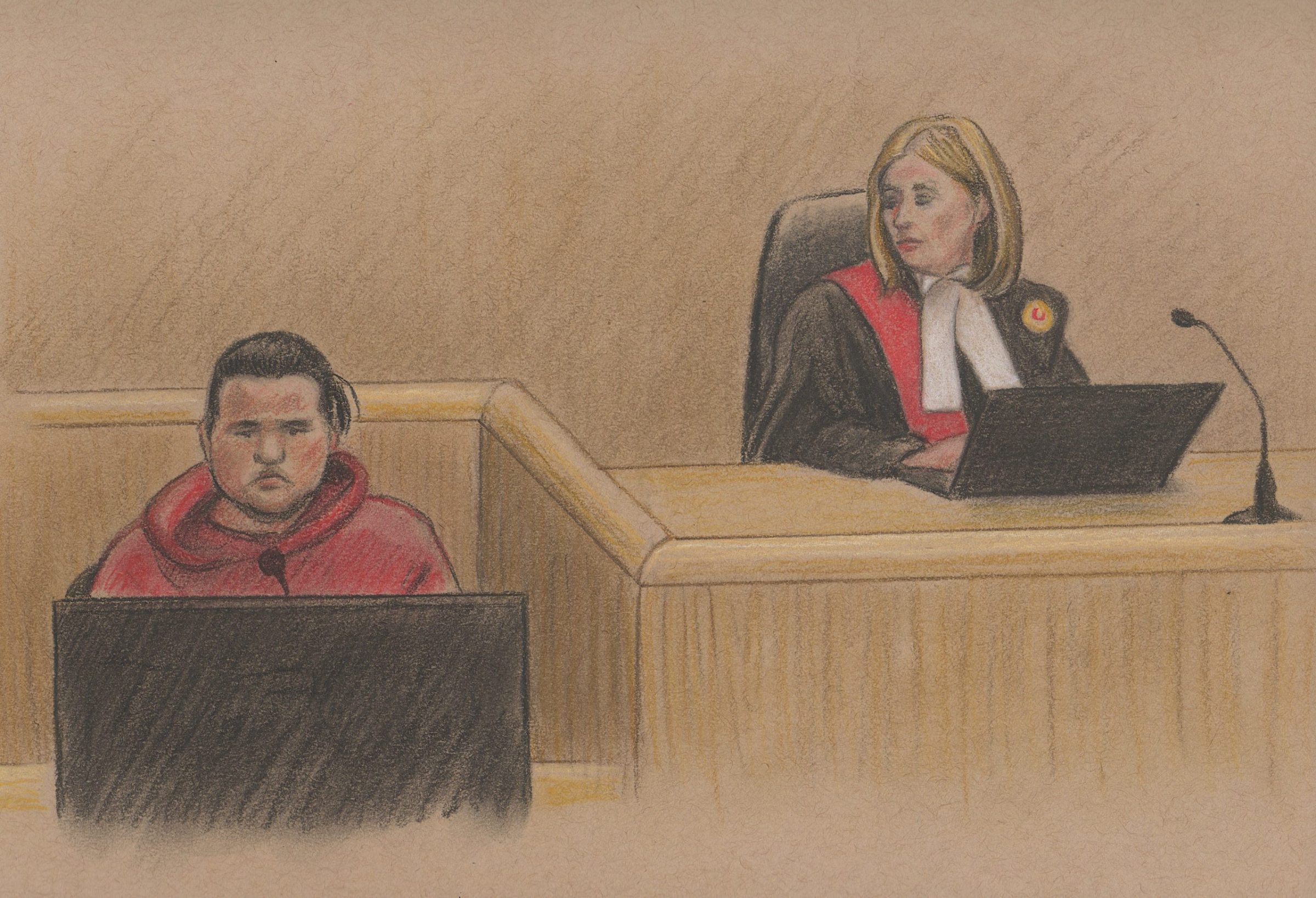 Tyler Hikoalok continued his testimony under cross-examination on Wednesday in his first-degree murder trial in Ottawa as Judge Anne London-Weinstein looks on. Hikoalok, 22, is accused of killing Elisabeth Salm, 59, in 2018. He has pleaded not guilty. (Courtroom sketch by Lauren Foster-MacLeod)

Tyler Hikoalok said he was blacked out for almost 24 hours the day that police and prosecutors allege he killed Elisabeth Salm more than four years ago.

The Cambridge Bay man continued his testimony under cross-examination Wednesday in his trial for first-degree murder.

Hikoalok is charged killing Salm, 59, as she worked in the library of the Christian Science Reading Room in Ottawa on May 24, 2018.

He has pleaded not guilty to the charge.

Salm’s family sat together in the courtroom on Wednesday, listening closely to Hikoalok’s testimony.

The 22-year-old has a stocky frame and stands just a few inches above five feet.

On the witness stand, he spoke slowly, often mumbling his answers so quietly that he had to be asked to repeat himself several times for the courtroom to hear.

Crown prosecutor Brian Holowka continued to push Hikoalok on what appeared to be inconsistencies in his recollections of May 24, based on what he told detectives shortly after his arrest, what he told a forensic psychiatrist earlier this month and what he said on the witness stand.

Referring to a transcript of an interview that the accused did with police when he was arrested on May 27, three days after Salm’s death, Holowka told the courtroom that Hikoalok had told detectives he had been drinking alone on May 24.

Earlier in his testimony Hikoalok had said that he had been drinking with a friend.

He also told detectives that he had walked around the city on the night of May 24, but said in his testimony that after drinking on Rideau Street that morning he blacked out until he woke up the next morning, on May 25, behind a bus stop in Vanier, an Ottawa neighbourhood a few kilometres east of downtown.

Hikoalok said he could not recall what he did on May 25, but he told a forensic psychiatrist that he went to the public library to meet a friend that day.

Holowka also pressed the accused on how his DNA could have ended up on Salm’s body.

Earlier in the trial forensic investigators testified that they found semen on the body of Salm that matched Hikoalok’s DNA profile.

Salm’s blood was also found on Hikoalok’s shoes and on a leather bracelet he was wearing when he was arrested.

Hikoalok repeatedly shrugged his shoulders and answered, “I don’t recall.”

On Tuesday, Hikoalok said he had never met Salm before May 24 and had never before been to the Christian Science Reading Room.

The forensic psychiatrist who examined Hikoalok for signs of fetal alcohol spectrum disorder is expected to testify about his findings on Thursday.