“My future is totally uncertain” 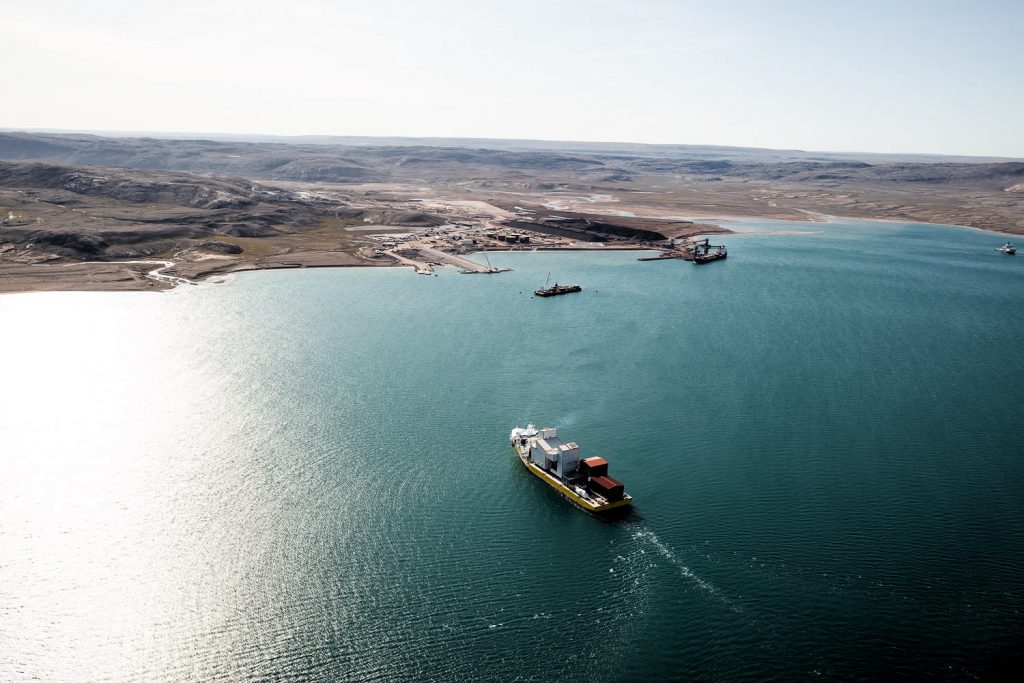 A German vessel called the Biglift Barentsz approaches Baffinland’s port at Milne Inlet this past August. One employee affected by the recent layoff of over 500 contract employees is speaking out about his frustration. (File photo)

About 150 kilometres south of Pond Inlet, a camp at Baffinland Iron Mines Corp.’s Mary River mine that once housed over 300 workers is almost empty.

Outside, a new camp, constructed by contract employees at the mine, has started to take shape. But only part of the foundation has been made.

That was in late November. A week before, over 500 contract employees at Mary River received lay-off notices from Baffinland.

“Due to the uncertainty of Phase 2 permit approvals, work associated with the 2019 Work Plan has been demobilized,” Salima Virani, a communications specialist for Baffinland, said in an email to Nunatsiaq News on Nov. 13.

Initially, Baffinland indicated that 96 Inuit contractors had been laid off. But in a letter the company sent on Dec. 6 to the Nunavut Impact Review Board, the company now says that number has been reduced to 48 Inuit workers.

One Inuit contract employees affected by the layoffs recently agreed to speak to Nunatsiaq News on the condition of anonymity, because Baffinland has strict policies about employees speaking to media.

When he spoke in late November, he said only a handful of contract employees were left.

“It got a little depressing for a couple of days and I had to evaluate my life. ‘I’m getting laid off, OK, what’s my next step or my options now?’”

The employee has worked in the mining industry for 13 years. He started as a contractor at Mary River just over a year ago as a heavy equipment operator.

The worker said his last day of work at the mine was originally set for Dec. 13, with a return date in early January.

But his layoff notice indicated he had to leave at the end of November, with no date to return.

“We started hearing rumours around September, October. The rumours really started flying around that we might not be able to work next year after New Year’s. We found out for sure right after the public meeting in Iqaluit. That was a signal right there that we weren’t going to come back,” he said.

That meeting in Iqaluit was intended to be the final public hearing held by the Nunavut Impact Review Board from Nov. 2 to Nov. 6 on Baffinland’s phase two expansion of its Mary River mine.

All week, intervenors had gone back and forth on the company’s proposed expansion, including a 110-kilometre rail line north from the Mary River site to its Milne Inlet port. The expansion would allow the company to ramp up its production from the current 6 million tonnes of iron ore per year to 12 million tonnes.

But Inuit groups around the table stated consistently throughout the hearing that they didn’t have enough information from Baffinland to move forward.

“We are concerned that we are going to conclude the public hearing when all things haven’t been finished. The people have to be consulted and have a meaningful discussion. Everyone around the table would like to understand everything that is being presented and how it’s going to affect NTI and organizations,” Aluki Kotierk, Nunavut Tunngavik Inc.’s president, said to a room packed with intervenors and the public on Nov. 6.

Kotierk then brought forward a motion to immediately suspend the final public hearing and defer its continuation for nine months to one year.

The motion received support from the Qikiqtani Inuit Association, which owns the land on which the Mary River mine operates.

“I think it just boiled down to there’s just too many outstanding questions that haven’t been resolved. From my perspective, if you’re going to make a decision for your future, you’ve got to ensure you have all the information available to make that sound decision. It just wasn’t quite there,” QIA president P.J. Akeeagok told Nunatsiaq News at the time.

For the worker who spoke to Nunatsiaq News and his Inuit colleagues, the adjournment meant they were out of a job.

“Once we heard, pretty much all of us got pissed off more or less. And some of us don’t have too many options,” he said.

The worker said most of the Inuit contract employees at Mary River were from the North Baffin communities: Pond Inlet, Igloolik, Hall Beach, Clyde River and Arctic Bay.

“Pretty much all of us were pissed off at NTI, QIA, NIRB. All those Inuit organizations that are supposed to be helping us but instead got us all laid off,” he said.

The worker said he wished Baffinland had sent an employee representative to the public hearing.

“They should have sent an Inuit representative that actually works here at the mine to have a say at the table. Our input should have been told. They should have at least warned us or given us a chance to see how we feel. We were completely taken out of the equation,” he said.

He also said he hopes the Inuit organizations will offer compensation to Inuit affected by the layoffs.

Recently, the Government of Nunavut and Service Canada offered employment insurance information sessions to people laid off from the mine.

Nunatsiaq News reached out to both QIA and NTI to respond to the worker’s comments.

QIA said it is preparing for next steps after its team recently visited Pond Inlet to meet with “Inuit directly impacted by employment loss and local leadership.”

But the future of the mine’s phase two expansion plans are still up in the air. Baffinland has proposed to resume the hearing in April 2020, while QIA and NTI support a year-long adjournment. The NIRB has yet to rule on the length of the adjournment.

“Currently, QIA is seeking a decision from the Nunavut Impact Review Board on the future process for the Phase II environmental assessment, and, clarity from Baffinland on their intended plans” QIA said in an emailed statement.

“QIA will continue its work to advocate for all Inuit rights with particular attention given to environmental management, community engagement, harvesting, employment and training opportunities, contracting, and the delivery of existing funds for direct community benefits under the current Inuit Impact and Benefit Agreement,” QIA said.

NTI is also waiting to hear how the NIRB will rule on the length of the adjournment.

“NTI continues to support the Mary River project. NTI does not oppose the principle of potential mine expansion but is concerned that it must be done in a manner which properly respects the balance between the benefits from such development and the environmental and cultural impacts. That is not possible in the process for this public hearing as it had unfolded over the five days,” NTI said in an emailed statement.

NTI did not comment on whether or not it had reached out to Inuit affected by the layoffs.

Back at Mary River, the laid-off worker is preparing to leave Mary River for what he wonders may be the last time.

“I love my job up here. I got a great boss, great workers. But my future is totally uncertain—what I’m going to do, where I’m going to get a job, especially before the holidays too.”