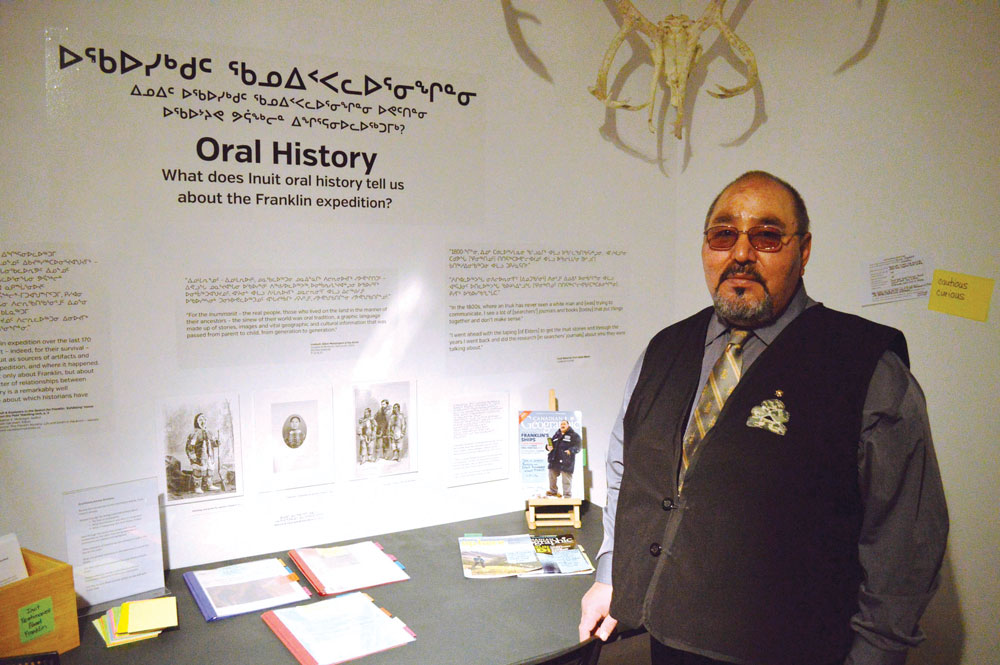 The renowned oral historian Louie Kamookak of Gjoa Haven at the Nunatta Sunakkutaangit Museum in Iqaluit on Jan. 19, 2017, when he gave a talk on Inuit knowledge of the Franklin expedition. Kamookak was instrumental in finding Franklin’s wrecks. (Photo by Steve Ducharme)

The discoveries—in 2014 and 2016—of the lost ships of Sir John Franklin’s 1845 Arctic expedition were among the most significant archaeological finds of their kind.

They had eluded searchers for nearly 165 years, and it was not until late in the 20th century, when researchers finally looked back at some of the recorded Inuit testimony, which had been neglected all this time, that the solution to the mystery was found.

Again and again, Inuit witnesses told those that sought them that one of the ships had sunk at Utjulik—the northwestern coast of the Adelaide Peninsula—in water shallow enough that, for a time, the masts were visible above the water. These clues, initially pursued in the 1990s by David Woodman, lay at the centre of the renewed search effort, begun by Parks Canada archaeologist Robert Grenier, along with the late Inuit historian Louie Kamookak in 2008.

Nearly every summer for the next six years, the area was searched, using small skiffs towing sonar. In 2014 Parks Canada decided to try searching further north in the Victoria Strait, near the ships’ last known location; ironically, it was only because of poor ice conditions there that they returned south to the Utjulik area. 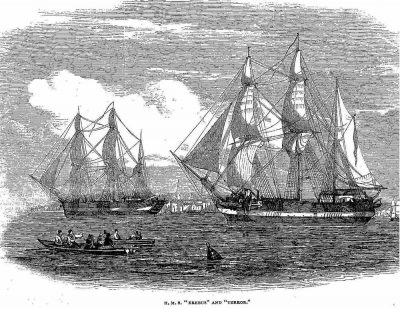 This early illustration depicts the departure of the Erebus and Terror from England in 1845. (File image)

And it was there, on Sept. 2, 2014, that Parks Canada’s Ryan Harris saw the shadow of what proved to be HMS Erebus on his sonar screen, and uttered the now-famous phrase, “That’s it! That’s it!”

The discovery resonated throughout the world, but particularly in Nunavut, where many felt that, although Parks Canada had followed the archaeological provisions of the Nunavut Act, the recovered relics were being taken south without the appropriate acknowledgement—some would say permission—of the Government of Nunavut or Inuit organizations.

Disputes over the exact nature of the rules led to some rancour, with then-premier Peter Taptuna at one point writing a letter to Parks Canada demanding the return of the relics. At the same time, although a memorandum of understanding signed in 1997 suggested that the U.K. government would cede most rights to the wrecks to Canada, the actual implementation of that agreement devolved into a lengthy and contentious process.

In the midst of all this, in September of 2016, Franklin’s other ship—HMS Terror—was found in (of all places) Terror Bay, by a ship acting on information supplied by Gjoa Haven resident and Canadian Ranger Sammy Kogvik.

Unlike the Erebus, which had suffered considerable damage from ice and currents, the Terror was found at a greater depth, intact to all outward appearances, even to the panes of glass on Captain Crozier’s cabin.

Fortunately, through a series of deliberative processes, the Gordian knot of conflicting parties that had been tied around access to these ships gradually loosened. A Franklin Interim Advisory Committee was created, and at its recommendation, Inuit Guardians were appointed to keep each site secure.

Agreements were reached with the GN, Inuit Heritage Trust and the Kitikmeot Inuit Association, such that the care and curation of all the relics would be shared between Inuit and federal agencies. Funds were allocated for an expansion of the Heritage Centre in Gjoa Haven, so that some of the recovered materials might be displayed there.

The relics recovered so far have been gathered for an exhibition, “Death in the Ice,” which has appeared in Greenwich in the U.K., at the Canadian Museum of History in Gatineau, and is presently at the Mystic Seaport Museum in the United States. 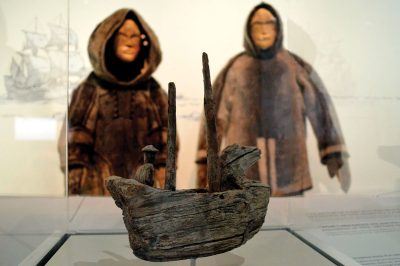 The Death in the Ice exhibition, which has been touring Canada, the U.S. and the U.K., is helping to tell the story of how Inuit knowledge led to the discovery of the lost ships from Sir John Franklin’s 1845 Arctic expedition. Here, mannequins in Inuit-style sealskin parkas look over an Inuit wood carving depicting a European-style ship from about the 1500s. (Photo by Steve Ducharme)

Finally, an agreement was negotiated whereby, in return for the relics so far recovered from HMS Erebus, the U.K. government now waives any right to material remaining on either vessel.

So what began in controversy has ended in consensus—and certainly, the discovery of these two legendary ships will now bring considerable benefits to Nunavummiut, both those in the communities nearest the wreck, but also collectively to all.

The increased travel to the region by passengers on expedition cruises, many of which are built around the widespread historical fascination with the Franklin story, will surely bring both revenue and increased understanding.

Most importantly of all, the story of the Inuit role in the discovery of both vessels is being told around the world, not only through the Death in the Ice exhibition (which will move on to Alaska this summer for the final leg of its journey), but through the interpretative and teaching materials that have been born of the collaboration between the federal and territorial governments.

When the long-hoped-for Nunavut archive and museum is finally a reality, all the items from this ongoing archaeological work—along with a vast array of material that’s been in storage since 1999—will come together to tell the broader story of Inuit people, of which the story of the Franklin expedition—dramatic though it is—represents in fact only a small part.

It’s thanks to the historical Inuit testimony recorded more than a century ago—along with the traditional knowledge and history still preserved by Inuit today—that this will be possible.

Russell Potter is Professor of English and Media Studies at Rhode Island College. His newest book, Finding Franklin: The Untold Story of a 165-Year Search, was published in 2016 by McGill-Queen’s University Press.