Moss and lichen uncovered by shrinking icecaps may be up to 115,000 years old 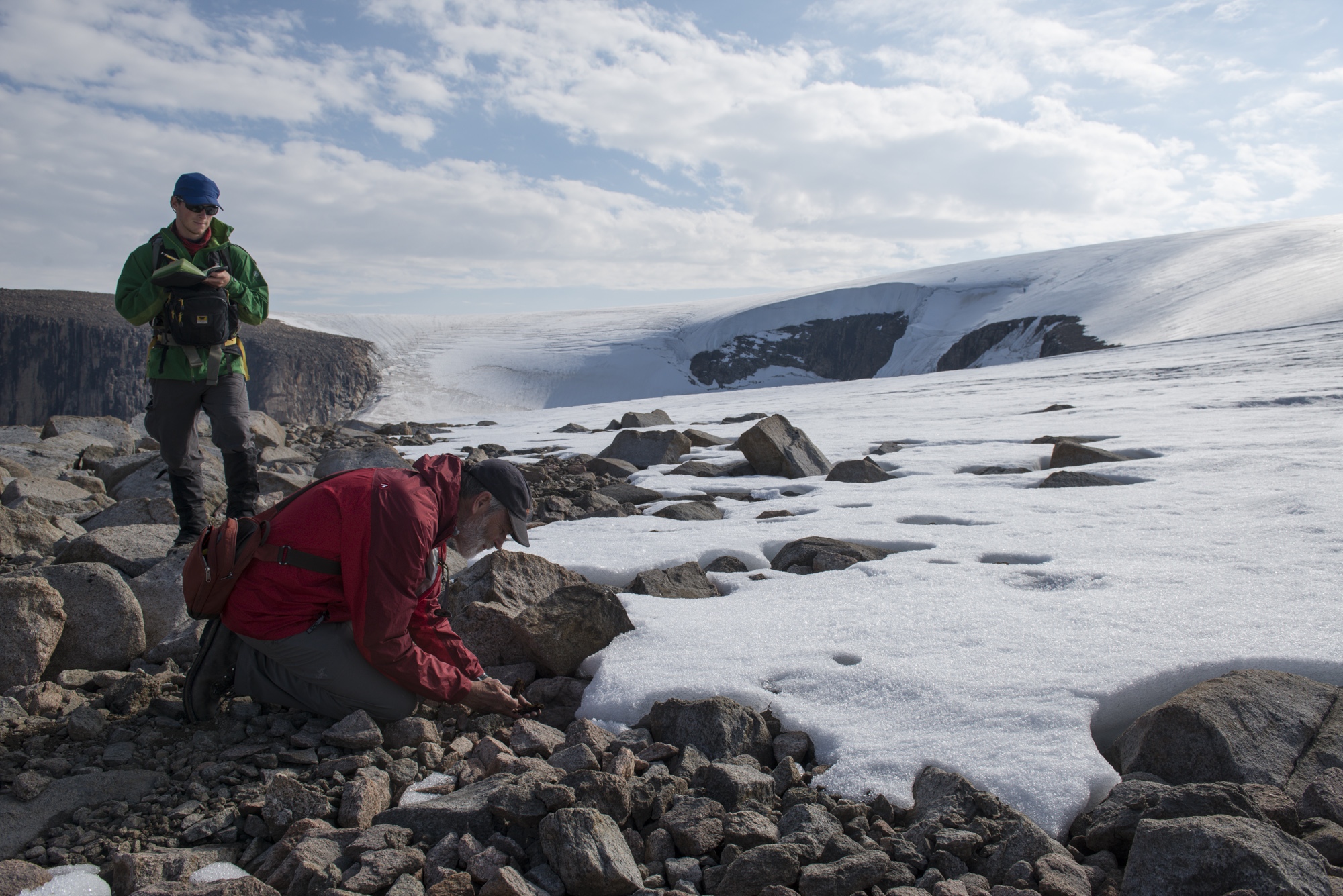 Simon Pendleton and Gifford Miller collect moss from an icecap on eastern Baffin Island. The American climate change researchers say the plants they gathered in Nunavut could be 115,000 years old. (Photo courtesy of Simon Pendleton)

Glaciers melting rapidly on Baffin Island are uncovering Arctic landscapes not seen in over 40,000 years—and possibly much longer.

That’s according to a recent study published in the journal Nature Communications, by a group of American scientists who spent three summers surveying ice caps on eastern Baffin Island around the Cumberland Peninsula.

“It’s very apparent that the glaciers are retreating rapidly,” said lead researcher and study co-author Simon Pendleton of the Institute of Arctic and Alpine Research at the University of Colorado Boulder.

To figure out how old these uncovered landscapes are, Pendleton and his team gathered 48 samples of plants from 30 ice caps near the Penny Ice Cap.

“We often think of glaciers as erosive,” Pendleton said. “These ice caps freeze to the bed and they don’t slide so they preserve the landscape underneath.”

That’s how, when the glaciers recede, northern plants like lichen or moss are left in the exact spot where they were growing when they were covered by ice. It’s also why plants can be used as a tool to study past glacial activity, Pendleton said.

By finding out how old the plants at the edge of the glaciers are, researchers could figure out when ice last started covering the landscapes.

“These landscapes that are just now being uncovered by retreating ice margins have been covered for at least the last 40,000 years,” Pendleton said.

The researchers found this through a method called radiocarbon dating.

The thing is, carbon dating is only really effective for dating material that is up to about 40,000 years old, so the plants could be much older. And they probably are, because 40,000 years ago the northern hemisphere was in a deep glacial period, Pendleton said, so it’s likely these plants were encased in ice back then.

To take a guess at just how old the plants are, Pendleton and his team looked at temperature records taken from ice core samples around Greenland.

They found that if you look back 40,000 years, and then keep looking back—it hasn’t been warm enough to see plant life around the Penny Ice Cap in 115,000 years.

That was during what is called an interglacial period, or, “the time between glacial periods,” Pendleton said.

If you visit the ice caps around Cumberland Peninsula now—close to Qikiqtarjuaq—you can see each summer how the glaciers are receding, metres at a time, Pendleton said.

“It’s profound. It gives you a real sense of the change that is occurring in the Arctic today,” he said.

The scientists did this field research in August, when the glaciers were at their warmest during the year.