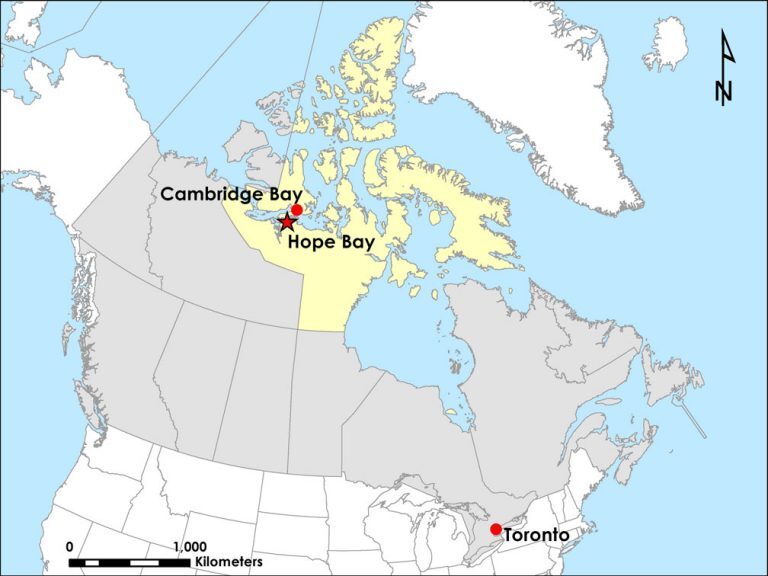 By Mélanie Ritchot and Randi Beers

TMAC Resources has found a buyer, a mere two weeks after the federal government quashed a proposed sale of the Nunavut gold-mining company to Chinese-owned Shandong Gold Mining Co. Ltd.

The two companies issued a news release Tuesday announcing a deal worth $286 million for Agnico Eagle to acquire TMAC, which had been searching for a buyer for nearly a year. The sale price is 26 per cent more per share than Shandong had agreed to pay last year.

Boyd said in a news conference Agnico Eagle’s first priority is to do more exploration and that it is confident it can turn Hope Bay into a “stable, larger, longer-life operation that is going to benefit all of Nunavut.”

“I don’t think anybody would be surprised if it ran for 50 years or more,” said Neal.

More exploration and eventual expansion would mean more jobs and training opportunities which TMAC did not have the resources to offer on its own, as a one-asset company, said Neal.

“The multi-generational impact that can make on communities is just outstanding,” he said.

Boyd said Agnico Eagle would like to see its number of Inuit employees “increase significantly” and confirmed all current employees will keep their jobs through the acquisition.

There are 140 employees at the Hope Bay mine now, but its pre-pandemic capacity was 345.

Martin Plant, the Nunavut VP of Agnico Eagle, said “it is really one of our core values to increase the number of Inuit employees on site.”

Last January, TMAC Resources announced it would need new investment in order to expand its mining operations along the gold field, which measures 80 kilometres by 20 kilometres — covering more than twice the area of Toronto. The company’s executive entered a strategic review of operations and ultimately decided to put TMAC up for sale.

In May, TMAC announced Shandong was willing to pay $207 million for the company. The federal government reviewed the proposal, with an eye on national security concerns, economic and other impacts. On Dec. 22, the government announced its rejection of the deal.

Agnico Eagle has called on the federal government to help build mining infrastructure in Nunavut over the last few years.

Now, Boyd said discussions with the government have been encouraging and things like renewable energy, wind farms and high-speed internet might be on the table, but it’s “still too early” to tell.

“It’s totally different than it was a few years ago where it was a struggle to get them to pay attention to what we were doing in Nunavut,” he said, adding that this could be because of the Chinese-owned company showing an interest in Hope Bay.

The deal announced Tuesday is an amended version of the arrangement TMAC had previously struck with Shandong. It’s subject to approval under the federal Competition Act. According to the release, TMAC will seek approval to substitute Agnico Eagle as the purchaser before the Ontario Superior Court of Justice via Zoom on Jan. 20.

The two companies have agreed to attempt to finalize the transaction on or before Feb. 8, according to the release.