Airline averts strike too late to save GN junket 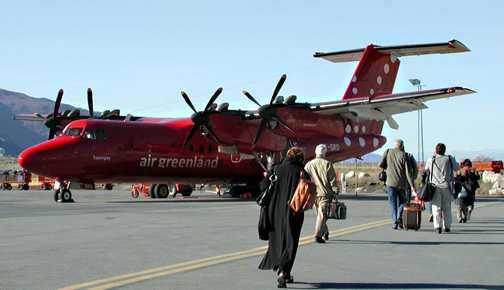 Passengers board an Air Greenland turboprop in Nuuk. The airline says it’s looking at mid-September for meetings with the Government of Nunavut to discuss interest in a new route that would connect Iqaluit and Nuuk. (PHOTO BY JANE GEORGE)

Representatives from Air Greenland hope to travel to Iqaluit in mid-September to discuss reviving air service between Nunavut and Greenland.

A planned meeting between Air Greenland and officials at the Government of Nunavut had to be scrapped because of the threat of a strike by the airline’s flight attendants.

But Christian Keldsen, Air Greenland’s sales and marketing director, said the airline is serious about pursuing the route and would like to see flights starting in 2010.

“We’re very serious about this,” Keldsen said in an interview from Nuuk. “The thing now for us is to ensure the economics, the finances and financial background for this route.”

Air Greenland wanted to come to Iqaluit to gauge interest in the route amongst the GN, the regional Inuit associations and private sector.

Keldsen said the airline isn’t looking for a subsidy for the route, merely assurances that the GN will act on economic agreements in place between the two regions, to help ensure a steady stream of customers.

Some observers have suggested Greenlanders may view the route as a gateway to southern Canada but Keldsen said vacationers there, apart from a handful of curious travellers, will likely continue to travel to Denmark to see relatives and friends.

“This is what we saw when we did the Baltimore route for awhile,” he said, referring to weekly flights to the American city that Air Greenland cancelled after losing millions on the route.

“People are not going to choose North America over Denmark for any reason. There is potential there, but it wouldn’t be enough to carry the route by itself. We would need some business people and government officials… to say ‘this makes sense to us.’”

Keldsen said the airline has yet to strike the necessary agreements with Canadian transport and customs agencies.

“It can take up to six months just to get the paperwork going when you do an international route,” he said.

Air Greenland management had to call off their trip to Nunavut to be on duty in the event of a strike by flight attendants. But eleventh-hour talks in the Danish capital of Copenhagen July 22 produced a new contract.

“We had a very last-minute agreement made that enabled us to call off the strike,” Keldsen said.

Air Greenland’s website says members of the Air Cabin Union “will now be subject to an election amongst ACU’s members within the next couple of weeks.”