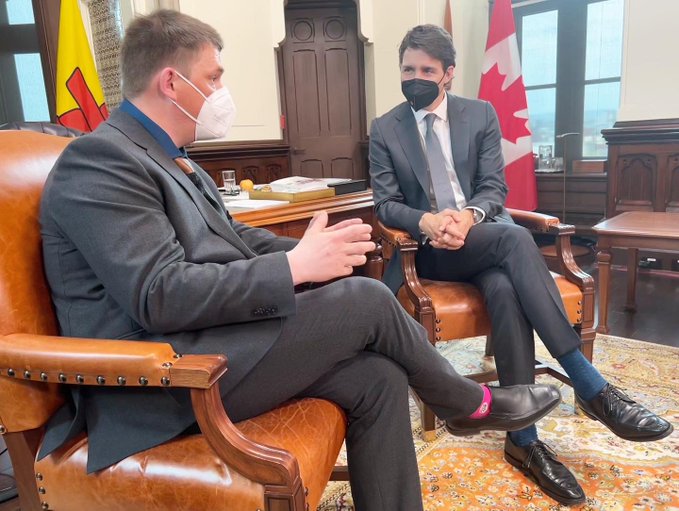 Arctic sovereignty and security were on the agenda Thursday afternoon during a meeting between Nunavut Premier P.J. Akeeagok and Prime Minister Justin Trudeau.

Akeeagok called it a “a great conversation” in a message he posted on Twitter after meeting Trudeau in his Parliament Hill office. He tweeted two photos — one showing the two leaders shaking hands and a second of them seated, talking with masks on.

“Thank you to Prime Minister Trudeau for taking the time to discuss joint work on Nunavut’s key priorities,” Akeeagok wrote.

In December, at the start of the current term for Nunavut’s legislative assembly, MLAs identified five “core priorities” to guide them over the next four-year term: a comprehensive elder-care strategy; reinvesting in education; enhanced health, mental health and addiction services; improved housing; and economic diversification.

For Akeeagok, Thursday’s conference with Trudeau followed a string of meetings this week. On Monday, he met with Yukon Premier Sandy Silver and Northwest Territories Premier Caroline Cochrane in Whitehorse.

The three territorial premiers issued a joint statement on climate change in which they called for “increased federal attention” on Northern issues, such as renewable energy and building infrastructure that can withstand the effects of climate change.

Arctic sovereignty and security have been on the minds of the premiers of Canada’s Northern territories, particularly since the Russian invasion of Ukraine.

In March, they signed a joint letter calling on Trudeau to talk to them about the emerging issue. They were on the agenda for a virtual meeting with Trudeau in early April.

On Wednesday, Akeeagok posted a picture of himself with Nunavut MP Lori Idlout and the head of her party, NDP Leader Jagmeet Singh. The premier and the two New Democrats talked about Nunavut’s “housing gap,” Akeeagok wrote.