“What he said and what he drew was what we felt” 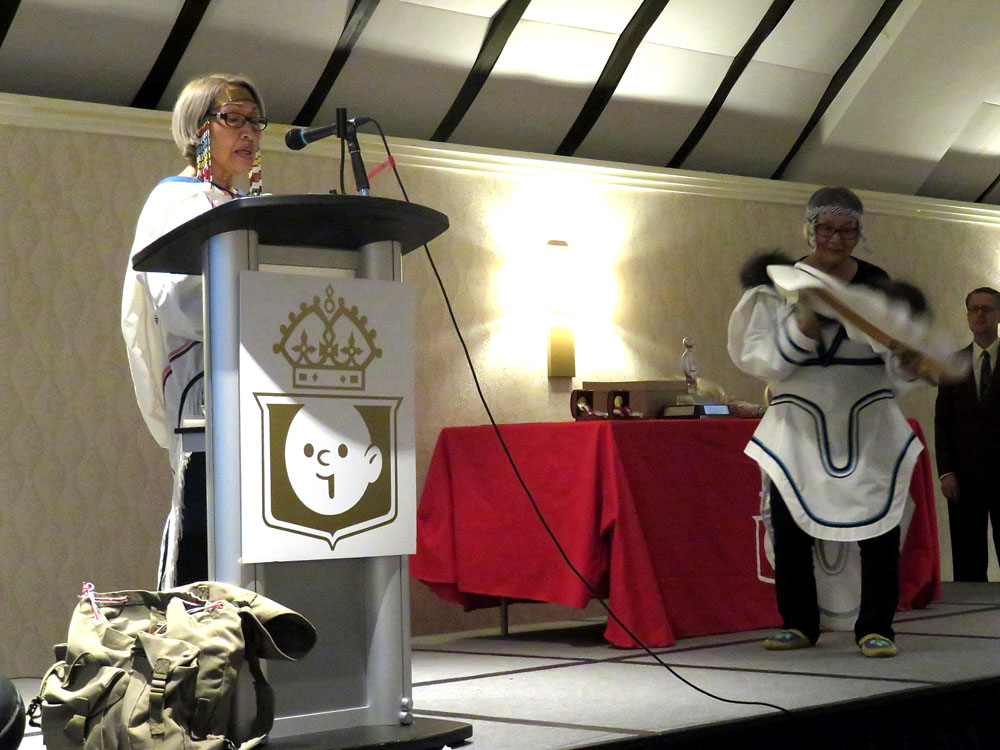 Monica Ittusardjuat sang a traditional Inuit song while Louisa Gillespie accompanied her on the drum at a ceremony to induct Alootook Ipellie into Giants of the North: Canadian Cartoonists Hall of Fame, held in Toronto on May 11. “What he said and what he drew was what we felt, what we wanted to say, but most of us were too shy,” Gillespie said. (Photo by Jamie Coville)

The famous artist and writer from Iqaluit, Alootook Ipellie, whose work is currently being exhibited at the Iqaluit museum, has been posthumously given a national award for his cartoons.

On May 11, Ipellie was inducted into the Giants of the North: Canadian Cartoonist Hall of Fame at the 13th annual Doug Wright Awards in Toronto. 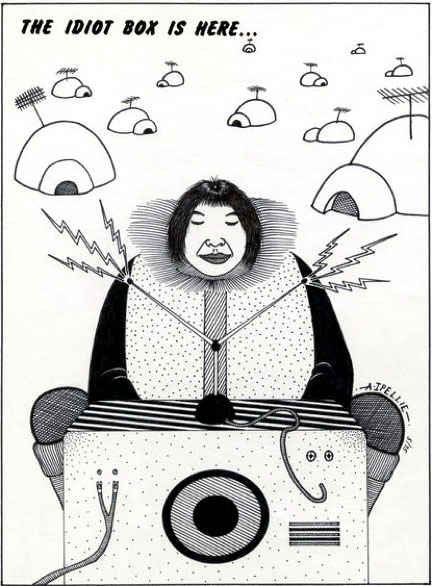 He is the first Inuk to be given this honour. Past winners include Doug Wright, Lynn Johnson, Aislin (Terry Mosher) and Duncan Macpherson.

Ipellie’s cartoons and comic series were featured in many northern Canadian publications and have been exhibited internationally.

With his cartoons, Ipellie tackled issues such as the effects of colonialization and forced resettlement on Inuit society, alcohol abuse, environmental concerns, and the many misconceptions that abounded about Inuit.

His wonderfully drawn cartoons were as amusing as they were thought-provoking.

“Alootook had an early interest in comics and eventually became a graphic designer, creating work that often satirically examined the modern world’s impact on Inuit life,” said Brad Mackay, a co-founder of the Doug Wright Awards.

Ipellie’s friends, Louisa Gillespie, who attended residential school with him in Churchill, Manitoba, and the Indigenous writer, Kateri Akiwenzie-Damm, accepted the award on his behalf.

“He was able to illuminate and articulate things about the North and Inuit way of life that no one had addressed in those ways prior to him doing it. So his cartoons remain relevant and beautiful and important today.” 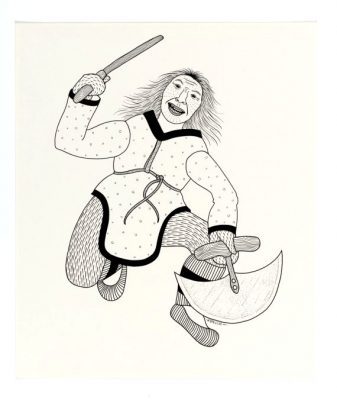 Gillespie discussed her memories of Ipellie in residential school, and commented that in his cartoons, Ipellie would share a lot of things that Inuit people were thinking.

“What he said and what he drew was what we felt, what we wanted to say, but most of us were too shy. And coming out of that he helped us to come out of that staying back,” she said.

Another friend of Ipellie’s, Monica Ittusardjuat, sang a beautiful traditional song in Inuktitut about a caribou shapeshifter, while Gillespie accompanied her on the drum. The song was featured in the movie Atanarjuat: The Fast Runner.

Gillespie then read a moving letter from Alootook’s daughter Taina Ipellie, who could not attend the ceremony.

In her letter she said: “I would like to thank you for honouring my father’s work, as much of it applies to the world we live in, even today…. I don’t profess to know exactly how he would feel on this day. I imagine he would feel honoured and very grateful for this recognition, probably happy to know his work lives on for many others to see, to enjoy and interpret for themselves.”

Ipellie’s daughter also revealed she had been able to forgive her father for not being a part of her life.

“Since that day I have come to know and appreciate his work from his art to his poetry, to his photography, and his comics. I came to realize what he had accomplished in his life, and how important some of his work was and still is,” she said.

The exhibit Alootook Ipellie: Walking Both Sides of an Invisible Border, which contains cartoons as well as drawings and examples of Ipellie’s written work, continues until June 15 at the Nunatta Sunakkutaangit Museum in Iqaluit.

It will travel this fall to the Art Gallery of Hamilton and in spring 2020 to Gallery 1C03 at the University of Winnipeg.

Joyce MacPhee is a writer living in Ottawa.