A High Arctic environment with beavers and other critters: A new study looks at the beavers that lived on Ellesmere Island three to five million years ago when the climate there was between 18 C and 20 C warmer than today. (Image by Luke Dickey, courtesy of Western University)

From three to five million years ago when the global climate was just that much warmer, annual temperatures on Ellesmere Island averaged up to 20 C higher than today. That warmth was due to Arctic amplification of the increased global temperatures and, as a result, Arctic beavers lived in an area full of trees and shrubs.

“It only takes a few degrees of global warming for Arctic environments to experience dramatic shifts in plant and animal communities,” Tessa Plint, a former Western University graduate student, now working on a PhD at the Heriot-Watt University in Scotland, told Nunatsiaq News.

Plint recently published a study in Scientific Reports about the beavers that lived at the Beaver Pond site on Ellesmere Island during that that much warmer period. 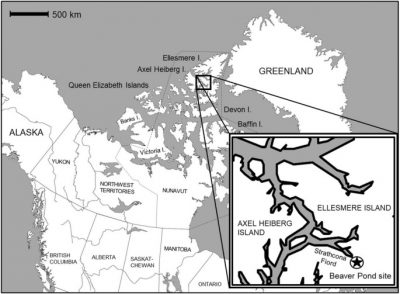 This map shows the location of Beaver Pond on Nunavut’s Ellesmere Island. (Image courtesy of the University of Waterloo)

By studying the fossils of these beavers, known as Dipoides, and the various pieces of wood these rodents consumed, Plint said that it appears that beavers first fed on trees and harvested wood before they evolved to build dams.

During the warmer Arctic period, the Dipoides beavers lived alongside other wildlife–such as three-toed horse, bear, badger, “deerlet,” water fowl, fish and a rabbit–whose fossils have also been found at the Beaver Pond site.

Then, the climate and landscape at 78°33′ N were different: the mean annual temperature was near freezing, warmer by between 15 C and 22 C than today, and the tree line was about 2,000 kilometres further north.

Despite the relatively mild conditions, the Beaver Pond would still have experienced total darkness and sub-zero temperatures during the winter months.

But the surrounding area would have had wetlands, ponds and fens. Overall, the scenery around Beaver Pond would have looked a bit like what you might see today in Labrador or Siberia.

There would have been an open forest of trees, featuring now-extinct species of larch alongside birch and dwarf birch, and colourful subarctic shrubs like red osier dogwood, Plint and Natalia Rybczynski from the Canadian Museum of Nature told Nunatsiaq News.

As for their habits, the Dipoides beavers would have been in and out of the water, coming onto land to cut trees and shrubs for food, they said. 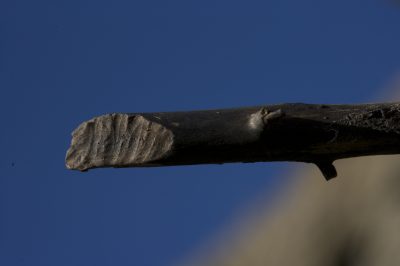 An ancient piece of wood from the Beaver Pond site on Ellesmere Island shows the bite marks of a beaver that lived there from three to five million years ago. (Photo by Martin Lipman)

An examination of the fossils collected by Rybczynski, who worked at the Beaver Pond for six field seasons, found that the beavers gnawed wood with rounded front teeth, not with square teeth like their larger modern relatives.

Square teeth are better suited for the bigger bites required to cut branches needed for dams.

Plint’s study suggests that the beaver tooth marks on surviving pieces of wood are the result of harvesting for food, or possibly starting an underwater winter food cache.

The Dipoides beavers likely didn’t hibernate, but they would have needed shelter, in either a burrow or perhaps a lodge structure, during the polar winter when there would have been months of darkness and the plants and trees would have been dormant.

Modern beavers create underwater piles of branches in the fall as a winter food supply, so the Dipoides beavers might have had a similar winter strategy.

“From these findings, we can begin to understand the potential impacts of current climate and environmental change on Earth, and anticipate–for example–who survives and who doesn’t,” said Fred Longstaffe, Canada Research Chair in Stable Isotope Science at Western University, in a news release.

As the land has risen, the Beaver Pond site now lies on a steep hill. (Photo by Martin Lipman)

As temperate as Beaver Pond was millions of years ago, today it’s not an easy place to reach, now being located on a steep slope 380 metres above Strathcona Fiord.

First noted by a geologist with the Geological Survey of Canada who found a fossil outcrop there in 1965, many researchers from the Museum of Nature have since studied the site.

The fossils are currently housed at the Canadian Museum of Nature in Ottawa.

Nunavut has an arrangement with the Museum of Nature to house and care for fossils from Nunavut at the museum until such time that Nunavut has its own facilities.