“There’s more help, medical or whatever help you need, you can get it here” 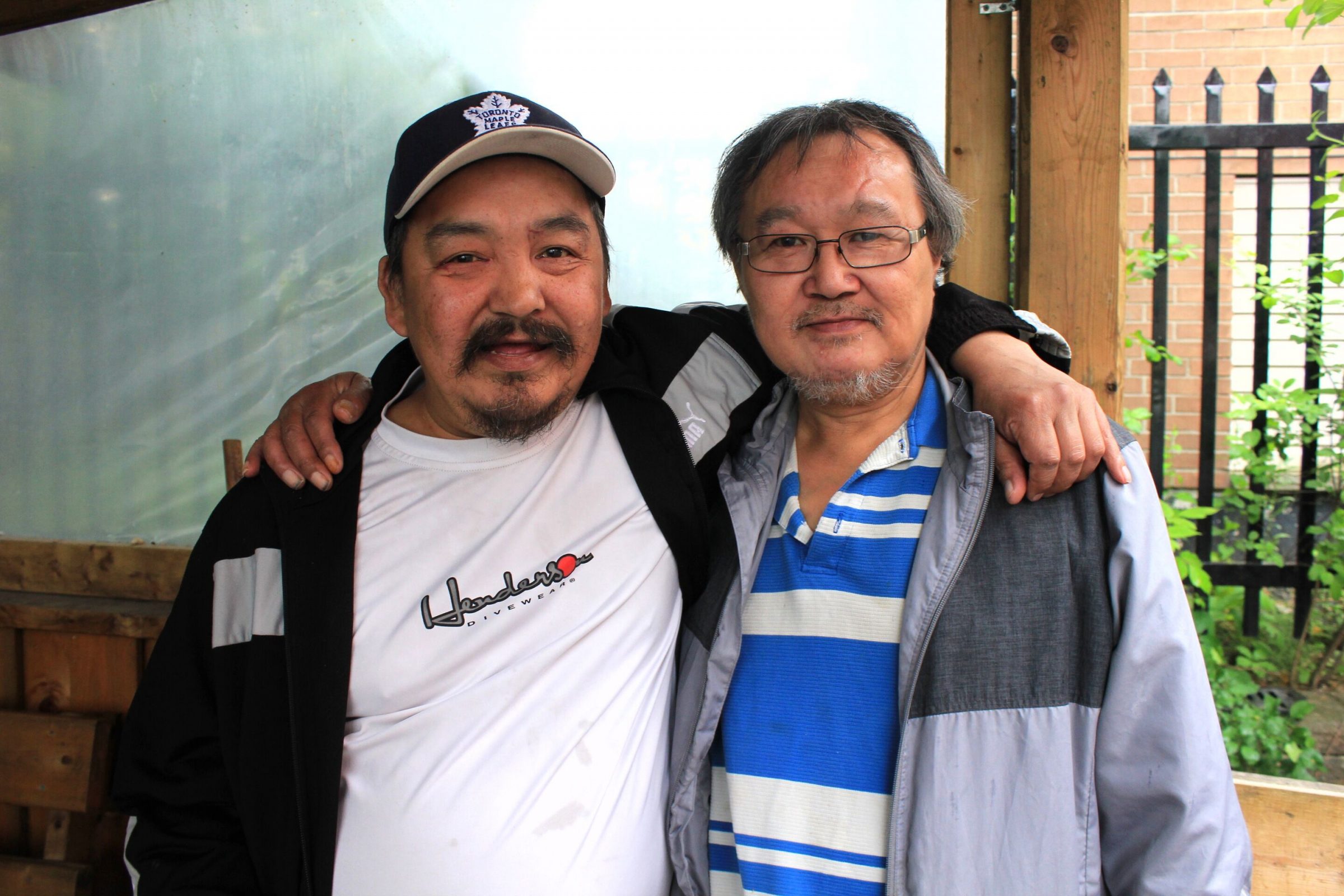 Tytoosie Tunnillie (left), from Cape Dorset, and Elisa Pewatoalook, from Pond Inlet. More than a dozen Inuit live at The Oaks and find comfort in their shared language and culture. (Photo by Lisa Gregoire)

It’s a humid day in Ottawa’s Central Park neighbourhood, and three Inuit and an Indigenous man from the west coast are playing cribbage at one of four long rows of tables in a common room filled with sunlight from a wall of windows.

In the back parking lot, men smoke tobacco, cannabis or both.

In the corner of the common room, near a hunk of caribou meat thawing on cardboard, volunteer Larry Dakin and an Inuk man play a soulful version of “Knockin’ on Heaven’s Door” on guitars. A couple of people sing along. 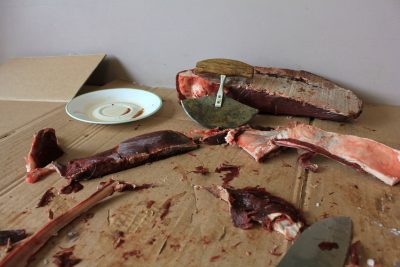 Inuit residents at The Oaks often have Nunavut caribou to eat. (Photo by Lisa Gregoire)

Behind the musicians, in a glassed-in room, two Inuit men watch Mantracker on a big-screen TV. The billiards room is surprisingly empty, two cues and a couple of balls resting on the red-felted slate.

It’s 10:20 a.m. at The Oaks residence and a few people have already wandered to the front counter to line up.

By 10:29 a.m., the line is long and snakes around the front entrance—men in wheelchairs and adult diapers; men in second-hand T-shirts that say Fun Run 2010 or Disneyland; women in stylish pants and sweaters; women in slippers and old jeans; men with nicotine beards; men with new glasses and ponytails; jittery women with big pupils; and old men with bulbous noses and smiling eyes.

They laugh and joke with staff. They make space for people with walkers. They lean on the counter. They look at the clock. They wait. 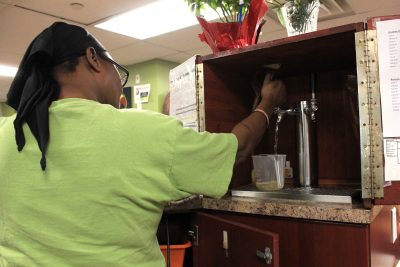 Lucia draws wine from a tap connected to a room where staff make wine. The Oaks goes through about 855 gallons of wine every four weeks. (Photo by Lisa Gregoire)

Every hour, on the half hour, from 7:30 a.m. to 9:30 p.m., staff members at The Oaks residence on Merivale Road give alcohol to residents who want it, a maximum of five ounces at a time of white wine—or else the equivalent in beer or spirits, by special arrangement.

Lucia, a frontline worker from South Sudan, unlocks the cupboard containing a tap connected to the wine-making room and starts portioning out alcohol into a plastic measuring cup and pouring it into residents’ coffee mugs, noting on a spreadsheet who’s having what.

Some take only half a dose. Some mix theirs with water. One guy doesn’t drink alcohol anymore but still lines up and gets juice because he enjoys the ritual.

A few residents down their drinks on the spot in one gulp. Others shuffle to a chair or head outside to the back lot, which has a gazebo and lawn chairs.

Opened by the Shepherds of Good Hope in 2010, The Oaks is a 65-unit residence and former hotel that offers a managed alcohol program (MAP) for hard-to-house alcoholics, many of whom would otherwise be on the street, in hospital, in jail or dead. 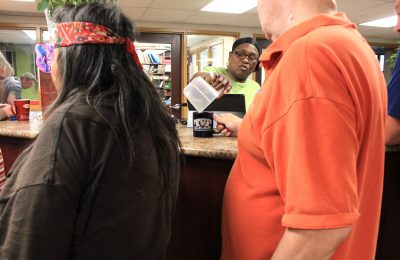 The Canadian Mental Health Association rents 10 units, leaving 55 Shepherds’ units occupied by 62 MAP participants. Most of them came through the Shepherds’ other MAP program at the charity’s inner city shelter on King Edward Street.

There is currently a two-year waiting list to get into the Oaks because most people, once they get in, stay until they pass away.

“The fact that they would choose to die here, rather than anywhere else, that says a lot. This is their home,” says Macquatt.

Residents pay for their room and board—$52.53 per day—from a variety of social assistance incomes, City of Ottawa subsidies and other grants. They also contribute to the cost of their alcohol and tobacco. 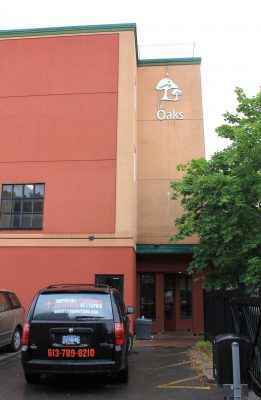 The Oaks is a 55-unit residence on Merivale Road that runs a managed alcohol program. It also rents 10 units to Canadian Mental Health Association. (Photo by Lisa Gregoire)

A nurse is on site during the day, peer support workers take them to medical appointments, and there are weekly activities and excursions to cure the boredom.

At present, one-fifth of The Oaks MAP residents are Inuit, mostly from the Baffin region, so you’ll always hear Inuktitut in the common room, even from some of the staff.

Lucia knows enough Inuktitut to carry on a simple conversation. “When you pronounce something right, they get so happy,” she says. “I’m coming from a country with 64 tribes and each tribe has a different language. That motivates me to learn more languages.”

“All of the things that lead to alcoholism in the general population, those things are perhaps more prominent in Inuit populations—histories of trauma, de-settlement, breakup of families, etc.,” he said. “These people have gravitated to managed alcohol programs and they do well in them.”

Health-care professionals don’t want to give booze to an alcoholic, Turnbull says. “But there are individuals who are unable or unwilling to stop their alcohol use, for many different complex reasons, and in that setting, there needs to be some kind of alternative for caring for people. We can’t just abandon them.”

Turnbull, who helped to create the Shepherds’ downtown MAP, and then The Oaks, says a drink an hour means an alcoholic doesn’t have to be panhandling, shoplifting or engaging in other street crimes to get a bottle. They can get a break from street violence and weather. And once they’re safe and calm, support workers can assess their mental and physical health and help them deal with specific problems. 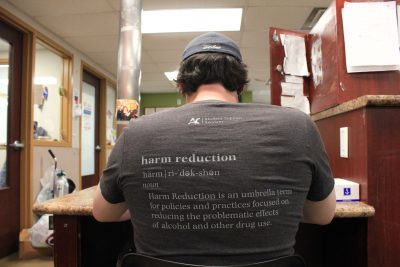 “I would love for them all to be abstinent but that is not the reality they live in and frankly, it’s not up to me. They have failed traditional abstinence-based programs repeatedly and are not interested in those programs any further,” he says.

The Inuit residents who spoke to us for this story miss their families and northern homes, but they all said that right now The Oaks is the best alternative for a stable, supported life.

“We forget sometimes that they come from a totally different background with different traditions and culture, says Macquatt. “We try to make them as comfortable as we can. We’re still learning. They’re teaching us.”

Thomasie Ningiuk, 49, is from Pond Inlet and has lived at The Oaks for about four years. He was pretty good in school, liked social studies, math and gym. He was a decent hunter and harvested his first polar bear when he was 17 years old. But he was also a messed-up kid. 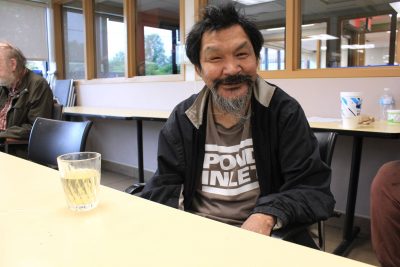 Thomasie Ningiuk wears a shirt from his hometown Pond Inlet. He has lived at The Oaks for about four years. (Photo by Lisa Gregoire)

“I got raped by a drunken man. I was about 12 years old or so. I tried to push him away but he was heavy,” Ningiuk told Nunatsiaq News.

He said he told people about it, but they didn’t believe him and that made him angry and sad. He said the rapist was never charged.

Ningiuk tried to make a life for himself, working odd jobs in town—water delivery, garbage pickup. Sometimes he’d talk to a therapist who would come to town periodically, but that didn’t help much, so he just numbed himself with alcohol whenever possible.

After lunch and the 12:30 pour, Tytoosie Tunnillie sits in the common area with a mug of wine, drumming the table to Pink Floyd’s “Wish You Were Here,” playing on the stereo.

Tunnillie, 44, is from Cape Dorset and he gets wistful when he talks about his South Baffin home. He was younger than 10 when he had his first drink, downing a glass of what he thought was lemonade left on the table by his dad, not realizing it was mixed with booze.

He drank on and off as a teenager and quit school in Grade 10. He learned to carve from his mother, renowned artist Oviloo Tunnillie, specializing in what he called “transformations”—part human, part animal creatures.

Tunnillie moved to Ottawa about two-and-a-half years ago and lived with his brother, but he was drinking too much to be a good roommate.

He wound up in the Shepherds’ emergency shelter downtown. Two years ago, he moved to The Oaks and now shares a room with another Inuk. He’d prefer to live alone, but it’s not that bad because he has so many Inuit friends at The Oaks and staff, he says, are very good to them. 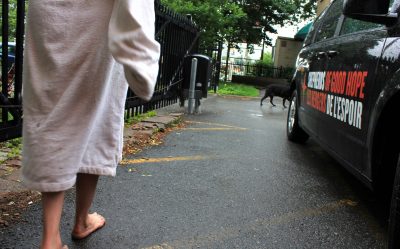 Elisa Pewatoalook, 55, dropped out of school in Pond Inlet in Grade 8.

“There were abuses, physical and…” he pauses before saying scornfully, “the rest.” He started drinking when he was around 13 and, since then, has struggled to stay alive. He spent time in jail, both in Ottawa and Iqaluit, separated from his wife and child and came close to dying three times, by his count.

“I’ve seen psychiatrists, psychologists,” he says, but nothing helped. What did? “This place. There are Inuit I can communicate with…. And there’s more help, medical or whatever help you need, you can get it here.”

Pewatoalook is now a peer support worker, accompanying other residents to appointments and getting paid to do so. “I love it. I like helping people and going places,” he says. “And it’s extra money.”

It’s early afternoon and residents are playing cards and pool, waiting for the 1:30 pour. Pink Floyd’s “Another Brick in the Wall” comes on the radio and an Inuk woman turns it up, and she and several Inuit sing the chorus together.

Lisa Gregoire is a former Nunatsiaq News writer and editor. She volunteers weekly at The Oaks.