‘Anything Uncle Bob did, he did it with humble excellence’: Bob Mesher fondly remembered 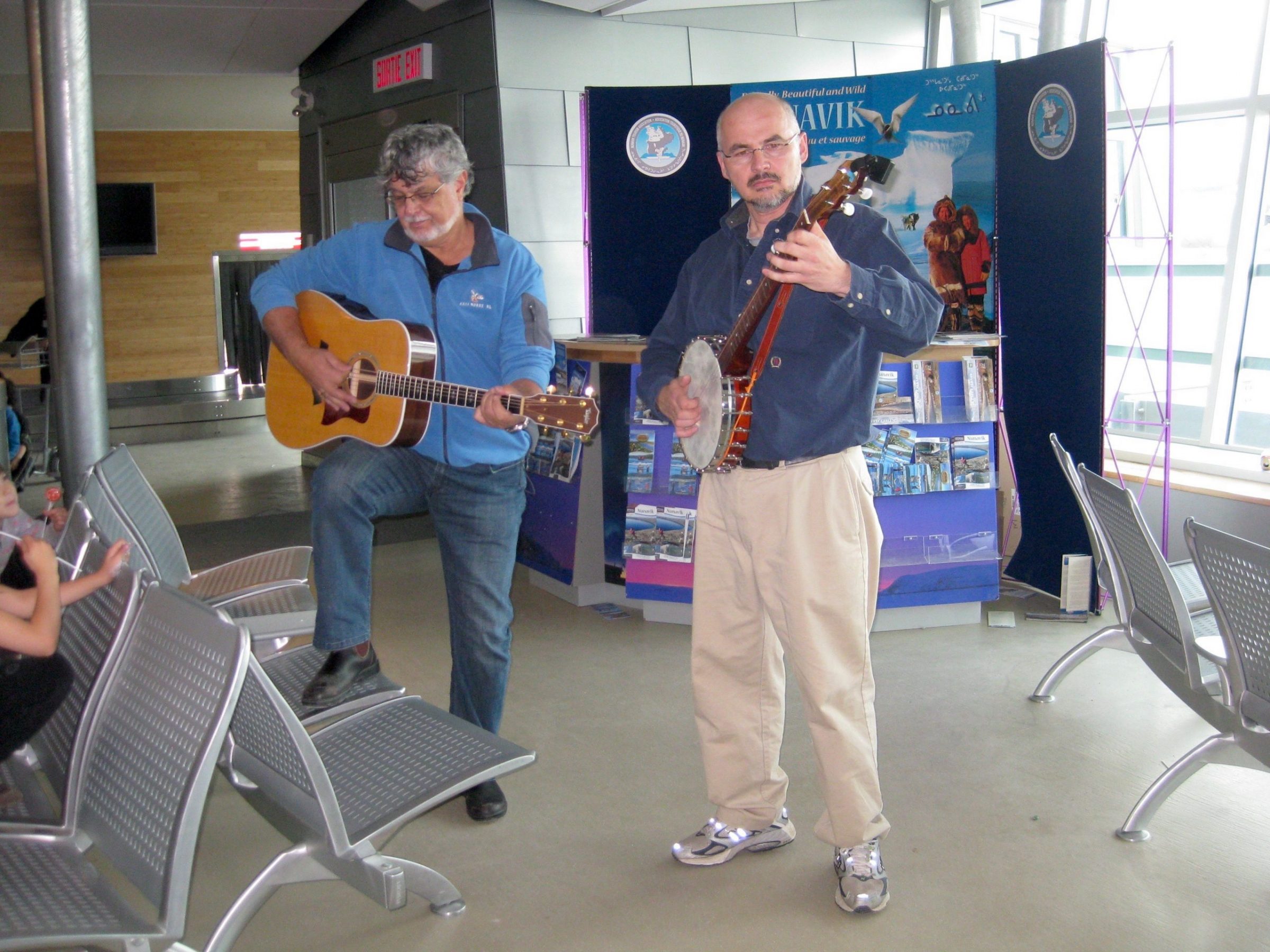 Bill Flowers and Bob Mesher play together at the Kuujjuaq airport in 2009 after they attended the funeral of Bob’s brother, Stewart Mesher. (Photo courtesy of Joey Murdoch-Flowers)

The sudden death of writer, editor, musician, and photographer Bob Mesher has left a huge hole among his friends and his large extended family, which stretches from Iqaluit to Kuujjuaq and Nunatsiavut.

“Uncle Bob was among the best people I knew,” said his nephew, Iqaluit lawyer Joey Murdoch-Flowers, about Mesher, 62.

Mesher, whose full name was William Robert, was born in Labrador, the son of Victor and Dorothy (Berthe) Mesher from Nunavik.

He died over the weekend in Happy Valley–Goose Bay, Labrador, at 62.

Mesher grew up in Happy Valley–Goose Bay and studied at Montreal’s Dawson College. After college, he moved back North to work with the Makivik Corp. in Kuujjuaq, where his sister, Emily, mother, Dorothy Mesher, and other relatives still live.

He wrote more than 60 stories in these publications, which also included his photographs of places, people and events in Nunavik and beyond.

“I never quite knew where Uncle Bob was, because he always seemed to be travelling and moving,” Murdoch-Flowers said.

“He lived in Happy Valley–Goose Bay, Dorval, Montreal, Kuujjuaq, Ville St. Laurent, back to Kuujjuaq, back to Montreal, and back to Labrador.

“He often told me about his trips for work, all around Inuit Nunangat, around the circumpolar world, and to the Appalachians to study and practise stringed instruments. ”

Mesher was an accomplished guitar and banjo player, too.

“It seemed that anything Uncle Bob did, he did it with humble excellence: building a house, playing stringed instruments, learning new skills, and loving and caring for his family,” Murdoch-Flowers said.

In 1998, Mesher co-wrote the film script for “Capturing Spirit. The Inuit Journey,” with Sheila Watt-Cloutier, Tarqralik Partridge and Gail Richardson. He was also the creative director for this film, which portrayed the life challenges facing Inuit youth.

After leaving Makivik, Mesher moved to Montreal to work on his master’s degree in education technology at Concordia University and also published his first book, a trilingual (English, French, Inuktitut) photo essay on Labrador, believed to be the first book of photography published by a Nunavik Inuk.

“I’ve heard stories about funny and amazing things he did, too,” Murdoch-Flowers said. “How he locked himself out of the house one winter’s night in Kuujjuaq in only a bathrobe and rubber boots, and had to run across town to go to mom’s place. 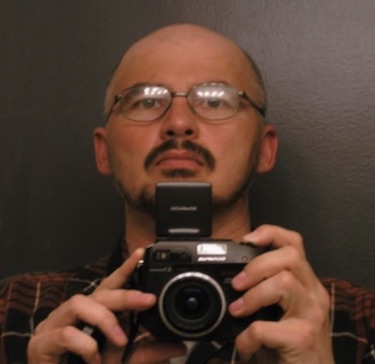 Bob Mesher, shown here in a self-portrait from 2014.

“Another time he walked from Happy Valley to Rigolet, though that trip, I believe, was planned. And he told me about how he had made a beaded, fringed deerskin vest in the 1970s, bartered it in Labrador, and then found it again at a church basement sale in Dorval in the 1990s. Apparently he was also a great cake decorator.”

Mesher also renovated a cabin on Range Road in Kuujjuaq with recycled materials, and built a house in Happy Valley.

In Happy Valley, Mesher scavenged discarded construction materials from torn-down buildings on the Canadian Armed Forces base in Goose Bay, and used them to build a modest house.

It had no bedrooms to speak of, Murdoch-Flowers said, but it had a porch, kitchen-dining room, a bathroom and a dirt crawl space that smelled like tar-treated wood and sand.

The front door was painted with an odd metallic silver paint. It closed with a hook and eye, instead of a doorknob or deadbolt.

“I grew up there in what my family called ‘the little house,'” Murdoch-Flowers said. “My parents separated and mom had three children to look after. Dad got the house, so Uncle Bob let us stay in the little house. Uncle Bob provided me with one of the most important things in life: a stable home. I knew that we were safe there.”

Later, Murdoch-Flowers would thank his uncle for what he gave him and his family.

“I realize that with the foundation he gave me in life, I felt safe and stable,” he said.

“I believe that foundation was important in giving me direction in life. Without Uncle Bob’s love, kindness, support, and care, I wouldn’t be where I am today: safe, healthy, caring, stable.”

The last time Murdoch-Flowers’s father, Bill Flowers, saw Mesher was in 2009, at the funeral for Bob’s brother Stewart, who died of cancer.

On their way home, at the airport, they pulled out their instruments and began to play.

Mesher died by suicide in Happy Valley this past weekend.

She posted an open message to her uncle: “I miss you so much. You will be in my heart forever, Uncle Bob. Thank you for being a beautiful human being. You brought us joy, humour, strength, music, family, the tangible and the intangible. I can’t fathom this world without you. I love you with all my heart, and so wish I told you once more just how very much.”

As of yet, no funeral plans have been announced.