Students in Grades 1 through 5 learn drum dancing, throat singing and the fiddle 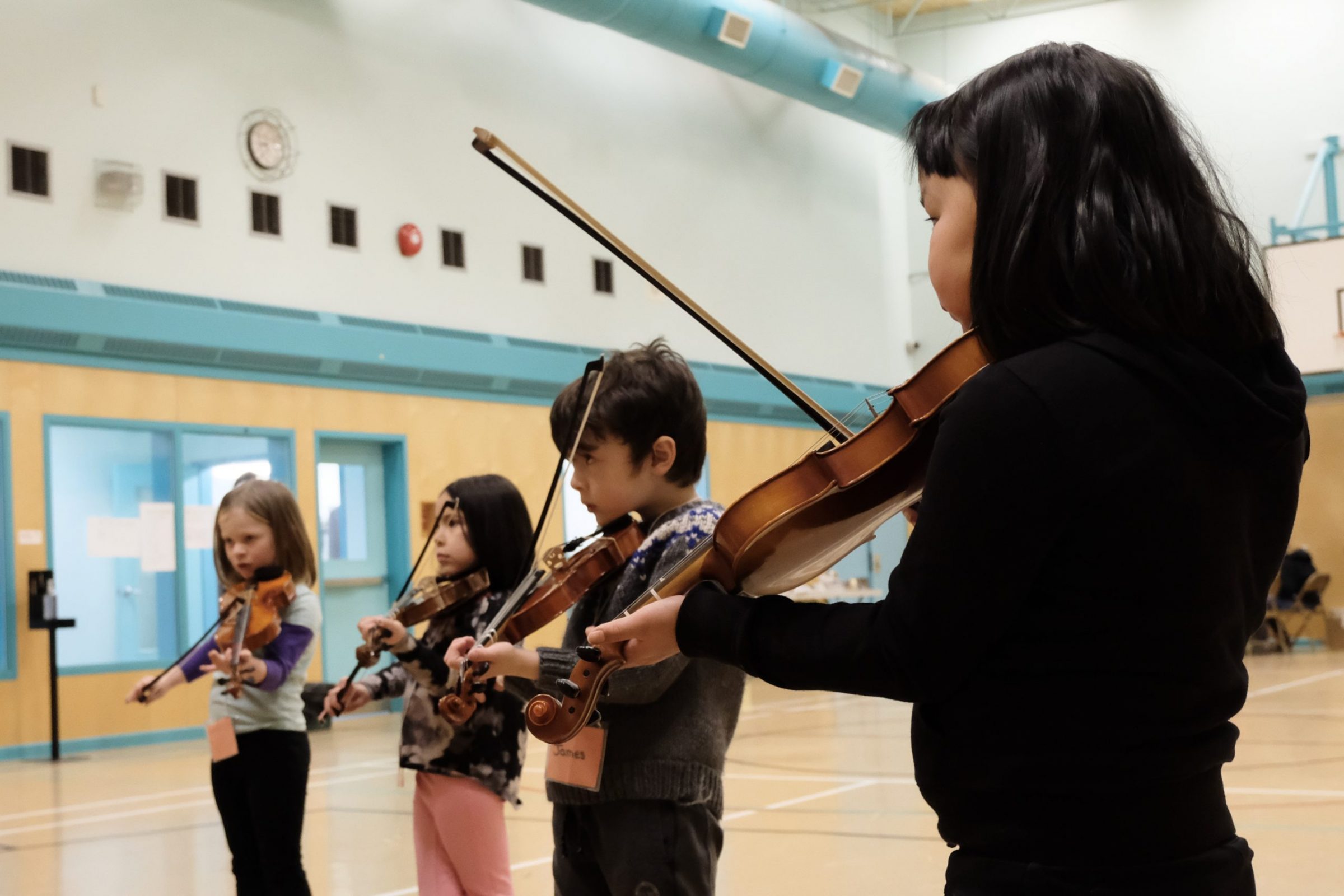 Twenty-five Grade 1 through 5 students at Nanook school in Apex are learning to drum dance, throat sing and to play the fiddle this February break. (Students are not required to wear masks, the Department of Education confirmed.) (Photo by Mélanie Ritchot)

It may be February break for most students across Nunavut, but two dozen children filed through the doors of Nanook Elementary School in Apex on Wednesday for their third day of throat singing, drum dancing and learning how to play the fiddle.

The group of Grade 1 to 5 students are learning to play traditional Inuit music, hearing from local musicians and making crafts as part of the Iqaluit Music Society’s first camp in the school.

“It’s wonderful to see the culture being brought back and revived and seeing it being allowed to grow, said Olivia Chislett, a throat-singing instructor with the camp. 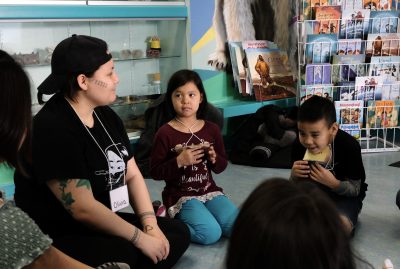 Olivia Chislett (left) is pictured here teaching students traditional Inuit throat singing at Nanook School in Apex during a week-long music camp. (Students and instructors are not required to wear masks, the Department of Education confirmed.) (Photo by Mélanie Ritchot)

Chislett learned how to throat sing at a young age, when a group of kids at daycare would teach each other songs they learned from relatives. Back then, she said, there were fewer kids learning throat singing, and lessons in schools were few and far between.

“It has been modernizing and developing quite a bit more … it’s like we’re catching up with what we missed,” said Chislett, referencing how throat singing was essentially banned for decades after missionaries arrived in Inuit communities.

Chislett started teaching throat singing around the age of 12 and now teaches alongside some of her past students.

She said she’s excited to see the young children at this week’s camp learn the basics of traditional throat singing and eventually go on to make it “something completely new.”

Naiome Eegeesiak, who also attended music camp as a child and now volunteers, said the younger the kids are when they start to learn traditional music, the better.

“It helps them gain confidence and shows them a little of where they come from,” she said.

The week started with musical games and simple lessons like how to keep a beat.

“Most kids haven’t throat sang or drum danced, or even fiddled,” said Eegeesiak.

All the teachers, mentors and volunteers at this week’s camp were campers themselves as young children, said Darlene Nuqingaq, volunteer president of the Iqaluit Music Society.

“I feel like a grandmother,” she said with a laugh, describing how she now sees some of her past students’ children attending music camp as well.

“Even though we’re a territory of artists and musicians … we don’t have our own specific fine-arts curriculum,” she said.

She and Eegeesiak are trying to make this happen through their project, “Imaa like this,” which is up for a $1-million prize as one of two Nunavut-based finalists for the Arctic Inspiration Prize.

The project aims to teach Inuit children traditional music in schools and train new music instructors, with the goal of creating jobs for musicians across the territory.

Currently, Nuqingaq said the amount of music teachers in Iqaluit and the rest of Nunavut cannot meet the high demand for lessons.

The Arctic Inspiration Prize awards one $1-million prize, up to four $500,000 prizes and up to seven $500,000 prizes each year. This year’s winners will be announced in a first-ever virtual ceremony on Friday.