‘Instead of having bananas arrive once a week, they arrive twice a week,’ says VP Duane Wilson 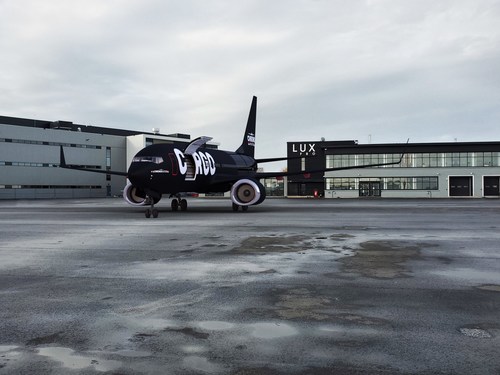 The Boeing 737-800 SFs will start flying from Winnipeg to Iqaluit in early 2022. (Photo courtesy of CNW Group/Chrono Aviation)

Arctic Co-operatives says some of its Nunavut customers can expect to find fresher produce in the new year, thanks to the acquisition of a new cargo plane.

The new plane carries about half as much freight as the Boeing 767-300, currently used by Cargojet to deliver cargo, said Duane Wilson, Arctic Co-ops’ vice-president of stakeholder relations.

Because it’s a newer, more efficient plane, it can fly cargo to Nunavut more frequently without a significant price increase for the goods shipped.

“Instead of having bananas arrive once a week, they arrive twice a week,” Wilson said.

“From a flexibility perspective, we’re going to have better results shipping half as much twice as often.”

The Boeing 737-800 can transport up to 52,000 pounds of cargo, according to a news release from Chrono Aviation. The new plane also emits 20 per cent less emissions per tonne of cargo compared to previous models.

If there is demand for more Boeing 737-800 SF cargo planes, Arctic Co-ops will look into acquiring more, Wilson said.

Chrono Aviation is a Quebec-based aviation company with a fleet of 15 aircrafts. In February, Arctic Co-ops announced it was making a “significant investment” in the company. In 2019, Chrono secured a contract to provide air transport services to Nunavut’s Mary River iron mine.

Another advantage to the smaller cargo plane is its ability to land and maneuver on shorter airstrips, Wilson said.

When Arctic Co-ops was flying bottled water to Iqaluit to help with the city’s water emergency, one flight took longer than expected because a large plane could not turn on Val d’Or’s small runway, he said.

“So with an aircraft like [the Boeing 737-800 SF], which doesn’t need the same turning radius as wide-bodied [aircraft] we could have done that type of lift to Iqaluit faster and probably cheaper because an airport like Val d’Or was an option,” Wilson said.