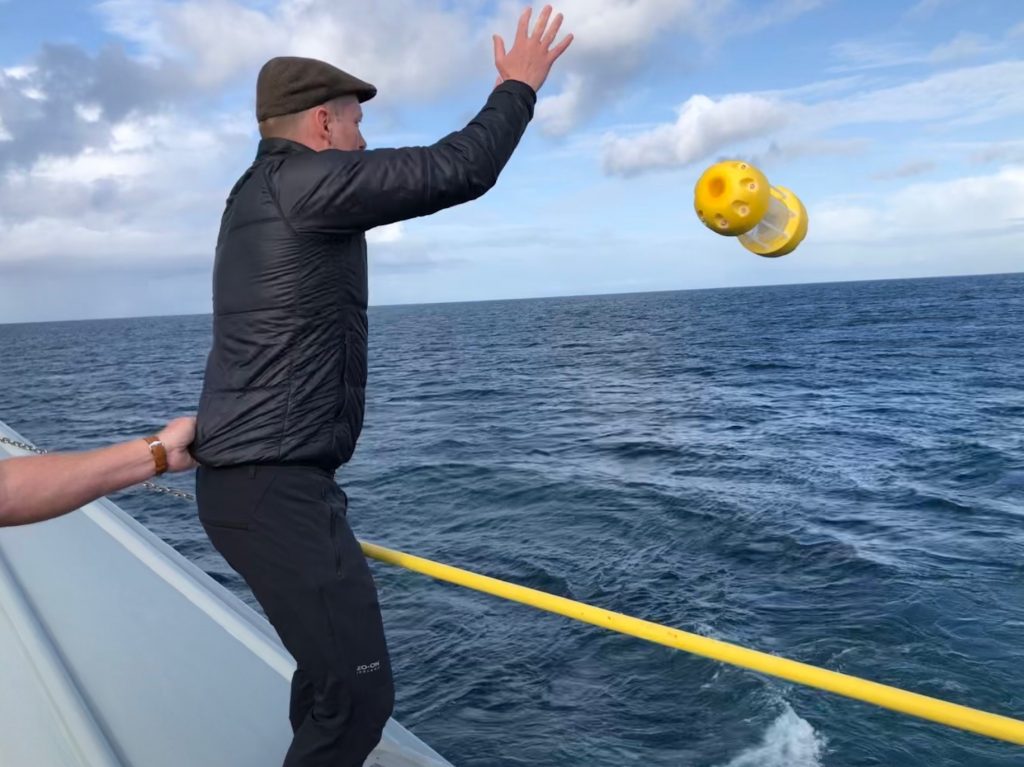 Iceland’s minister for the environment and natural resources, Guðmundur Ingi Guðbrandsson, tosses a plastic bottle equipped with a GPS tracker from a coast guard boat offshore Iceland last week. This kicks of the council’s focus on plastic and plastic litter in the Arctic. (Photo courtesy of the Arctic Council)

But it wasn’t just any bottle. This one was equipped with a GPS transmitter when it went into the North Atlantic on Sept. 12 and floated away. 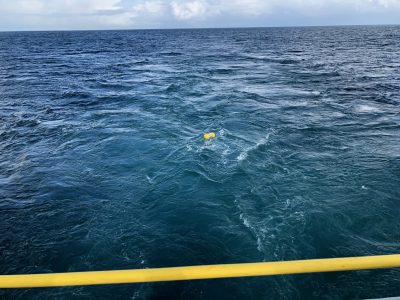 Here you can see the “plastic-in-a-bottle” capsule heading off on its Arctic journey on Sept. 12. (Photo courtesy of the Arctic Council)

“Plastics in the oceans is a growing problem,” Guðbrandsson said in an Arctic Council news release. “It is essential to enhance knowledge on how marine litter travels around the oceans worldwide.

“The plastic-in-a-bottle project will give us an important insight in that regard as well as increasing our awareness about plastics in the oceans.”

And researchers have also found large amounts of microplastics in the ice. These pieces are smaller than five millimetres, which is about the size of a pencil eraser.

Other research has concluded that the ice cap has become “a dead end for the surface transport of floating debris,” with perhaps 300 billion plastic items floating around in the Arctic waters.

Plastics have also been found in Arctic seabirds and marine mammals, including whales and seals, sharks, fish and invertebrates.

“Reducing marine litter, in particular plastics, is one of my priorities as a minister and we have already initiated many actions and are planning even more to that regard,” Guðbrandsson said.

The journey of the “plastic-in-a-bottle” will simulate how marine litter and plastics travel far distances into and out of Arctic waters.

PAME said that when it comes to how plastics travel into and out of Arctic waters, “our knowledge on the trajectories of this marine litter remains limited.”

So PAME said it is hoping to gain information to better understand this problem.

“Our aim is to show how expansively marine litter and plastics can travel and to gain a better understanding of how plastics that originate from far away end up on shores in the Arctic. The project is also a great outreach tool to create awareness around the issue of marine litter and plastics in the Arctic,” said Soffía Guðmundsdóttir, PAME’s executive secretary, in the release. 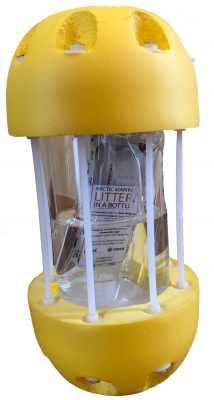 If you find a “plastic-in-a-bottle” capsule washed up, you can open in and find instructions on how to report it. (Photo courtesy of the Arctic Council)

Every day, the GPS transmitter sends a signal allowing viewers to follow the journey of the bottle in real time through an online map on the PAME website.

Once washed ashore, a message inside the bottle will instruct the finder what to do with it.

Over the next few months, PAME will launch more bottles, designed and built by Icelandic engineering firm Verkís, from different locations across the Arctic.

In 2017, the Arctic Council’s Fairbanks ministerial declaration first noted “with concern the increasing accumulation of marine debris in the Arctic, its effects on the environment and its impacts on Arctic communities” and resolved “to assess the scope of the problem and contribute to its prevention and reduction, and also to continue efforts to address growing concerns relating to the increasing levels of microplastics in the Arctic and potential effects on ecosystems and human health.”

In June 2014, governments attending the first United Nations Environment Assembly also noted with concern the impacts of plastics and microplastics on the marine environment, and called for strengthened action, in particular by addressing such materials at the source.