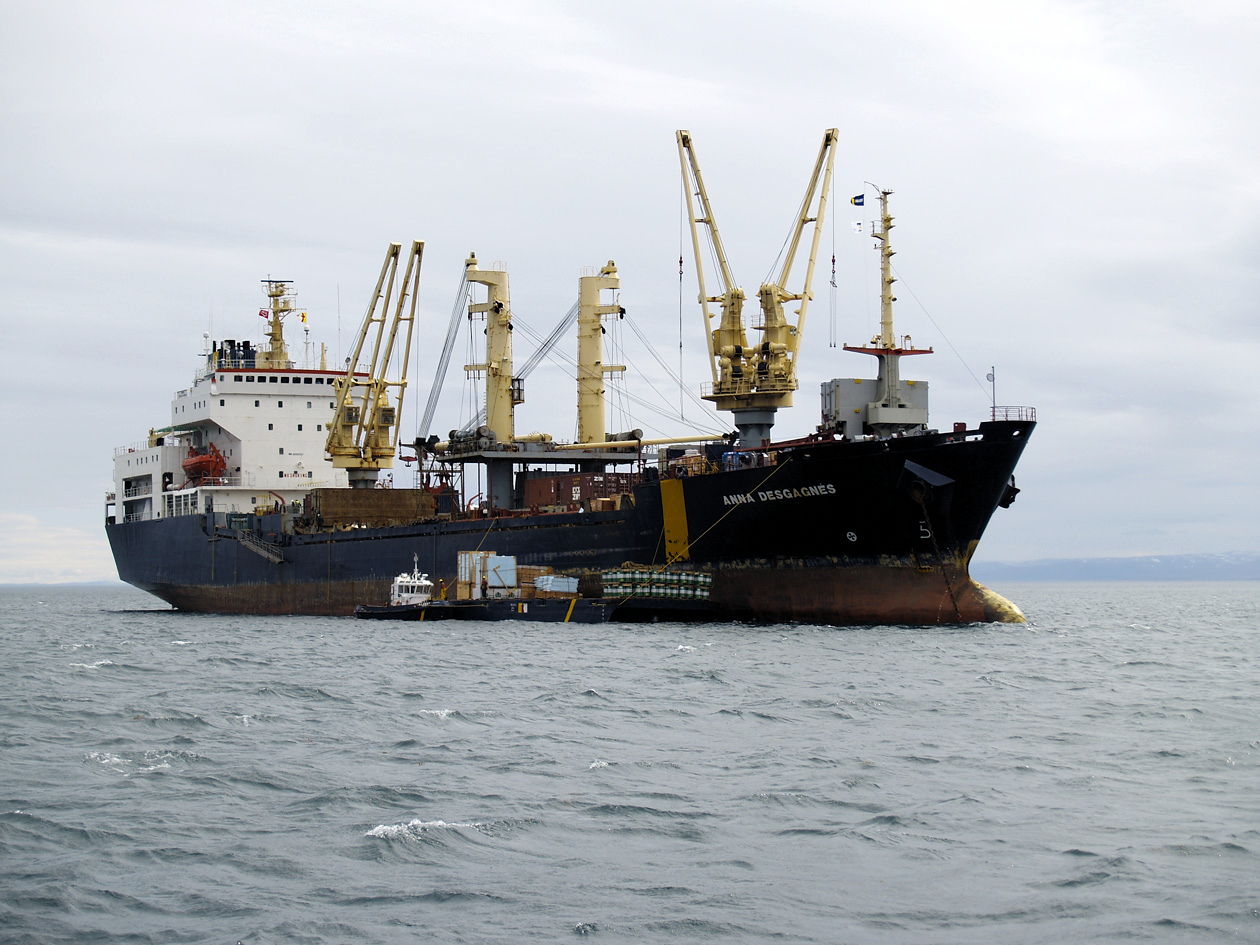 The Arctic sealift vessel Anna Desgagnés, operated by Groupe Desgagnés of Montreal through Nunavut Sealink and Supply Inc., lies off Iqaluit in the waters of Frobisher Bay. (File photo)

The International Maritime Organization’s proposed ban on heavy fuel oils, or HFOs, for ships sailing through Arctic seas, including Nunavut waters, contains so many “outrageous” waivers and exemptions it might even create greater environmental risks for coastal communities, a global alliance of environmental organizations said today.

The Clean Arctic Alliance made the statement in reaction to a big new study released this week by a body called the International Council on Clean Transportation.

“Now it’s clear the IMO’s proposed ban on HFO use in the Arctic is a ban in name only,” said Sian Prior, the Clean Arctic Alliance’s lead adviser, in a news release that denounced what they call its “dangerous loopholes.”

The World Wildlife Fund Canada, which is a member of the alliance, agrees with that assessment.

“Only 20 per cent of the HFO used in the Canadian Arctic would be banned by 2024. That’s not a ban,” Andrew Dumbrille of WWF-Canada said in an statement emailed to Nunatsiaq News.

For that reason, the WWF wants all waivers and exemptions dropped from the IMO’s proposal, which a subcommittee of the IMO agreed to this past February and is supposed to take effect in 2024.

But at the same time, WWF-Canada is calling on the federal government to create a transition fund to help northern communities cope with the increased cost of living that a total ban on HFOs could produce, Dumbrille said.

In their report, the clean transportation council had analyzed the proposed HFO ban to predict its effectiveness.

And in Arctic waters off Canada, 93 per cent of HFOs used in 2019 would still be allowed.

That’s because of a set of exemptions and waivers attached to the ban that last until at least 2029. They’re intended to protect Arctic coastal communities from the higher living costs the HFO ban is likely to create.

For example, a 2019 Transport Canada report said that if Arctic sealift firms switch from HFOs to cleaner but more expensive distillate fuels, the average Nunavut household would—in the worst-case scenario—pay up to $1,392 more per year.

And that could disproportionately hurt lower-income Inuit more than non-Inuit, the study found.

So Transport Canada recommended a “phased-in” approach to an HFO ban that protects the environment, but also reflects the economic realities of high-cost Inuit communities.

But this might actually increase the risk of pollution within inshore waters, the alliance said, because “the continued use and carriage of HFO in the Arctic is likely to increase after the ban takes effect, as older ships are removed from the fleet and newer ships with protected fuel tanks replace them.”

That exemption covers about three-quarters of the vessels that Baffinland Iron Mines Corp. uses to ship iron ore from its port at Milne Inlet.

And a special waiver exempts Nunavut sealift vessels that fly the Canadian flag and operate in Canadian waters.

“Because it’s likely more and more ships will qualify for the waivers and exemptions over the next few years, the amount of HFO banned will be even less than the amounts described in the ICCT research,” Dumbrille said.

Last February, the Inuit Circumpolar Council said they support a total ban, and that they’re uncomfortable with the IMO’s proposed waivers and exemptions.

HFO, often called bunker oil, is a thick, tar-like substance that’s difficult to clean up if spilled into cold waters, and produces particles of black soot, or black carbon, when burned.

When the black carbon particles settle onto ice or snow, they decrease its ability to reflect sunlight and increase the extent to which it absorbs heat, accelerating the effects of climate change in the Arctic.

HFOs are already banned for use in Antarctic waters. An international campaign led by the 19 organizations that make up the Clean Arctic Alliance has been seeking a similar ban for the Arctic.

The IMO proposal will likely come before a meeting of the IMO’s marine environment protection committee to be held at the IMO headquarters in London this November.