Robert Kautuk and Leslie Reid are two photographers whose work in the Arctic is on display at the Ottawa Art Gallery. ‘Dark Ice’ is a multimedia exhibition exploring the intersections of climate change and colonialism in the Arctic. (Photos by Alex Taylor/Laura Pia Churchill)

When photographer Leslie Reid thinks of her earliest connections to the Arctic, she recalls sleeping on the warm polar bear skin rug her father brought home from his adventures piloting photographers across the North.

“The Arctic was something that was in our family in that sense,” she said, speaking from her home in Ottawa.

“But I definitely wanted to experience it for myself.”

It’s no surprise then that Reid, now a photographer and multimedia artist herself, would retrace her father’s steps in her own efforts to document life in the Arctic.

Photos, videos and paintings of the 10 years Reid has spent visiting Arctic regions, including Nunavut and Norway, make up one half of “Dark Ice,” a new multimedia exhibition at the Ottawa Art Gallery about climate change and colonialism in the Arctic.

The other half is the work of Robert Kautuk, a photographer from Clyde River who uses drone photography to capture sweeping aerial views of Inuit communities and the Arctic landscape.

Kautuk’s work has been published in Nunatsiaq News, but this exhibition marks the first time he has printed and displayed his photography in a gallery.

The exhibition is deliberately set up in a way that blends Kautuk’s and Reid’s art together, symbolizing the shared themes of their work, said curator Rebecca Basciano.

In the middle of one room, canvas banners hang from the ceiling, with Kautuk’s aerial photography on one side and Reid’s close-up shots of rocky landscapes on the other.

In a large print, a self-portrait of Kautuk shows him looking up at the northern lights in the night sky, while another shows a bird’s eye view of a small cabin at the edge of a settlement, with ice floating in the Arctic sea. 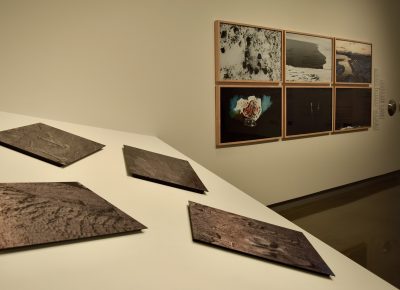 The Ottawa Art Gallery’s “Dark Ice” exhibition blends the photography of Clyde River’s Robert Kautuk (right) with the multimedia installations and images of Ottawa’s Leslie Reid (left). Both artists centre their work on climate change and colonialism in the Arctic. (Photo by Madalyn Howitt)

Traditional photo prints, metal work, images illuminated in lightboxes and Reid’s short films about forced relocation and the High Arctic community of Resolute Bay are woven together to create “a dialogue that maps the Arctic” in the wake of climate change, Basciano said.

The pairing of the two artists’ work made sense, she said — Kautuk’s work stands out as a rarely seen local perspective of changing Arctic ice formations in the wake of climate change, while Reid’s experimentation with different mediums captures other perspectives of the region.

Kautuk declined an interview request for this story, but said in a media release that he took up drone photography because he wanted to see his community from a different angle rather than with a regular camera.

Reid, who said she’s happy to be part of an exhibition that recognizes the essential work of an Inuk artist, believes her work and Kautuk’s compliment each other.

“He’s so present in the land and those photographs, and yet he’s looking at it,” she said. “I was basically a visitor to all of those places, but I’m looking at it too, and I really admire and love and respect the intersection of our looking, our gaze.”

The exhibition opened April 23 and will run until Feb. 26, after which it will go on tour to Iqaluit and other Canadian cities.