Booming snow geese and muskox populations may cause population drops 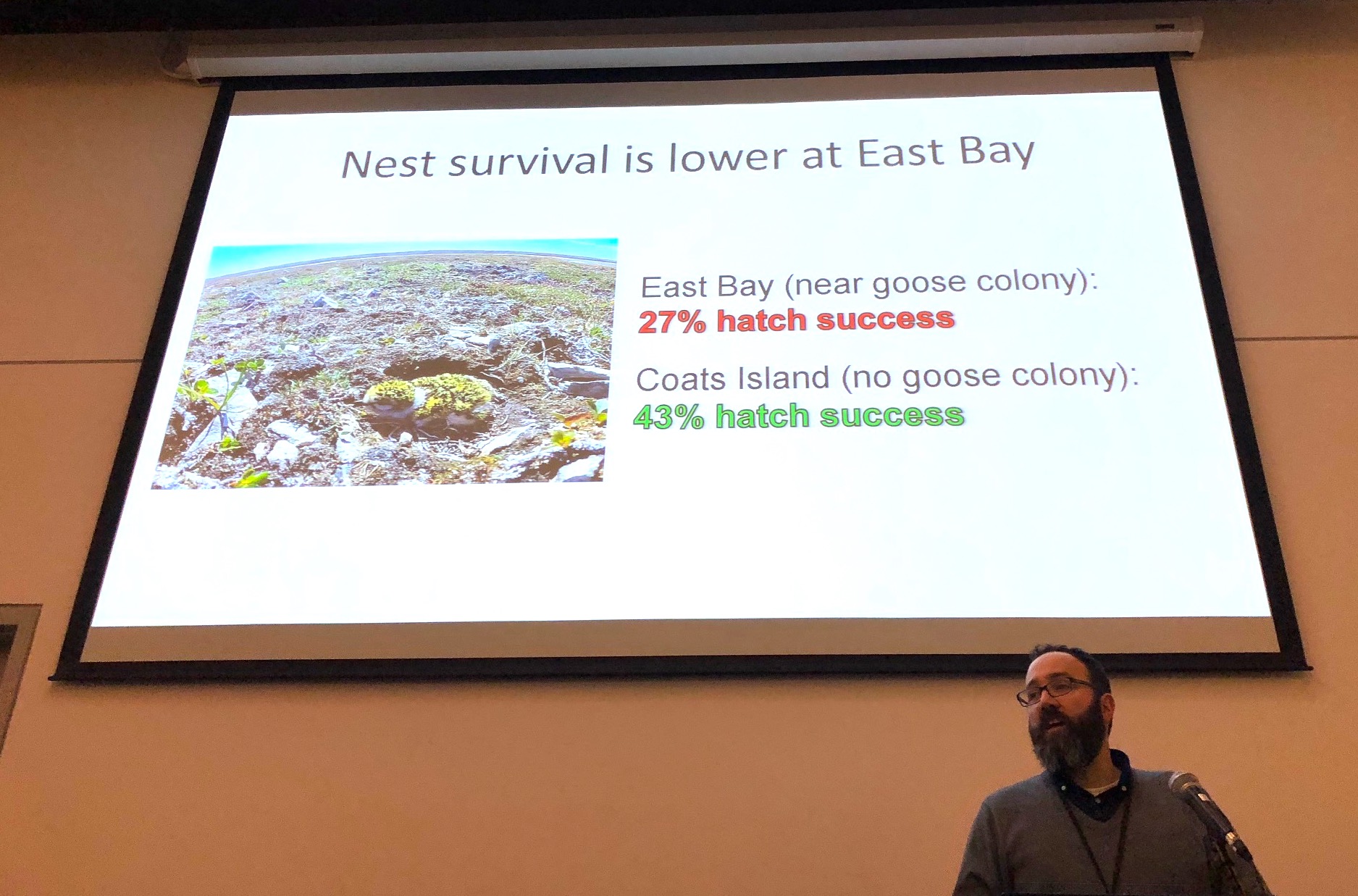 Paul Smith from Environment and Climate Change Canada discusses his research on snow geese and shorebirds at the recent ArcticNet conference in Ottawa. You can see in this slide that around this nesting area there is no vegetation to protect nesting birds from predators. (PHOTO BY JANE GEORGE)

Competition between species in the Arctic can prove devastating, as two presentations at the recent ArcticNet conference in Ottawa show.

For example, if you were a shorebird trying to nest among Arctic grasses, you might not like having lesser snow geese as your neighbours, because these birds destroy the vegetation and leave you more open to predation.

Research shared by Paul Smith of Environment and Climate Change Canada showed what he called the “explosion of snow geese,” now numbering between 15 and 22 million, has a big impact on shorebirds and the environment.

“Reserves, agriculture and reduced hunting have supported range shifts and explosive growth,” he said. So much so that “even liberalized hunting cannot reduce population.”

Meanwhile, the population of shorebirds in the Arctic has declined by about half.

During one recent breeding season, Smith said nest survival at East Bay on Nunavut’s eastern Southampton Island showed only a 27 per cent success rate. On Coats Island at the northern end of Hudson Bay, where there is no colony of snow geese, the success rate was 43 per cent.

Smith suggested the difference in the success rates is because snow geese and shorebirds like the same habitat: vegetated wet tundra habitats provide ground-nesting Arctic shorebirds with concealed nest sites, and geese with breeding and staging grounds.

But, as geese eat the vegetation, shorebirds that like their nests to be hidden in grass become exposed and vulnerable to predators like foxes, whose numbers also increase when there are more geese.

Foraging geese may also ﬂush shorebirds from their nests more frequently, causing the eggs or chicks to be left alone for longer periods. This also affects the shorebirds’ breeding success, Smith suggested.

Alexis Brodeur, a graduate student at Laval university, also shared his research about the potential for competition between eastern caribou and muskox in Nunavik.

A herd of a few muskox first introduced into Nunavik from Ellesmere Island in the late 1960s has now grown to roughly 2,000 animals.

Brodeur found that for 35 days in the winter the caribou and muskox are in the same general location along the eastern Hudson Bay shore, so they could be competing for the same food.

And that could be having an impact on the numbers of caribou, he said.

Brodeur’s research made sense to Larry Audlakuk of Grise Fiord, who is on the Qikiqtani Wildlife Board.

After listening to the presentation, Audlakuk told Brodeur that he was “very interested in this study’s results,” because in Grise Fiord the number of Peary caribou appeared to nosedive when the muskox population grew.

Also listening to Brodeur’s presentation was Larry Carpenter, who chairs the Wildlife Management Advisory Council of the Northwest Territories.

Carpenter said that when muskox on Banks Island suffered from disease that killed them in great numbers, caribou became more numerous.