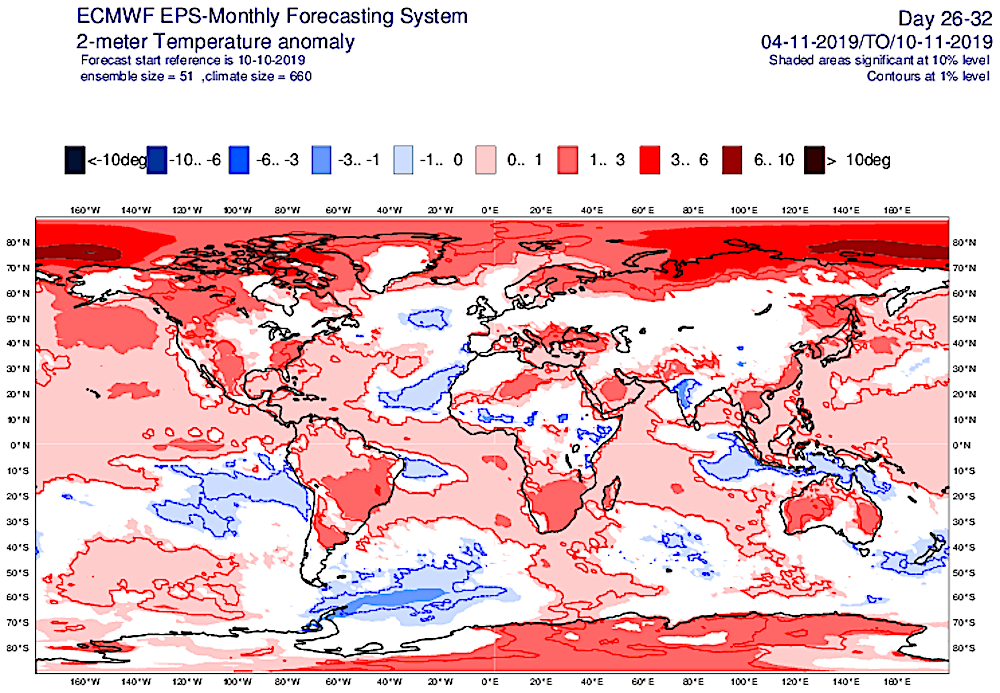 This recent four-week forecast by the European Centre for Medium-Range Weather Forecasts shows a warm signal across the whole planet, with increases of 1 C to 6 C forecast for the Canadian Arctic, with the exception of parts of Nunavut’s Kivalliq region. (Map courtesy of the European Centre for Medium-Range Weather Forecasts/Twitter)

Recent climate maps show a large amount of heat blanketing the entire polar region, with temperatures ranging from 1 C to 6 C above the norm predicted for the next month.

So perhaps it’s not a surprise that several high temperature records recently tumbled at the Canadian Forces Station at Alert, on Nunavut’s Ellesmere Island, located some 2,000 kilometres north of Iqaluit.

Weather records have been kept since 1950 at Alert, which lies at a  latitude of 82.3 degrees north.

Alert wasn’t the only place in Nunavut where many residents have noted unusually warm conditions.

Johnny Ugjuk of Rankin Inlet said on Twitter that “I sometimes don’t feel like it’s October, because I just seen a siksik (Arctic ground squirrel) in town, still feeling like September to me.”

And Gordy Kidlapik of Arviat posted two photos on Twitter to show the big difference in temperature between this year and last.

October 9, 2018 when I went 40 miles inland with son in law and his father crossing frozen lakes by ATV.
Couple days later on the 11th when I took our oldest daughter ice fishing while she and family were in Arviat.
This morning it’s 1 C with a forecast of 5. pic.twitter.com/fo3dFCrCTO

Nunavik also had some warm days. On Saturday, Oct. 12, Kuujjuaraapik was the “hot spot” in Canada, with a temperature of 20.6 C, breaking the previous high temperature record for that date of 19.9 C in 2003.

That same day was also a record-breaker in Kuujjuaq, with a high of 19.2 C, breaking the long-standing previous high temperature of 13.8 C from 1978.

Saturday also marked the second-warmest October day ever on record for Kuujjuaq, after 20 C on Oct. 5, 2014, Duplessis noted.

These warm waves come after a warmer-than-average month of September across the Canadian Arctic. 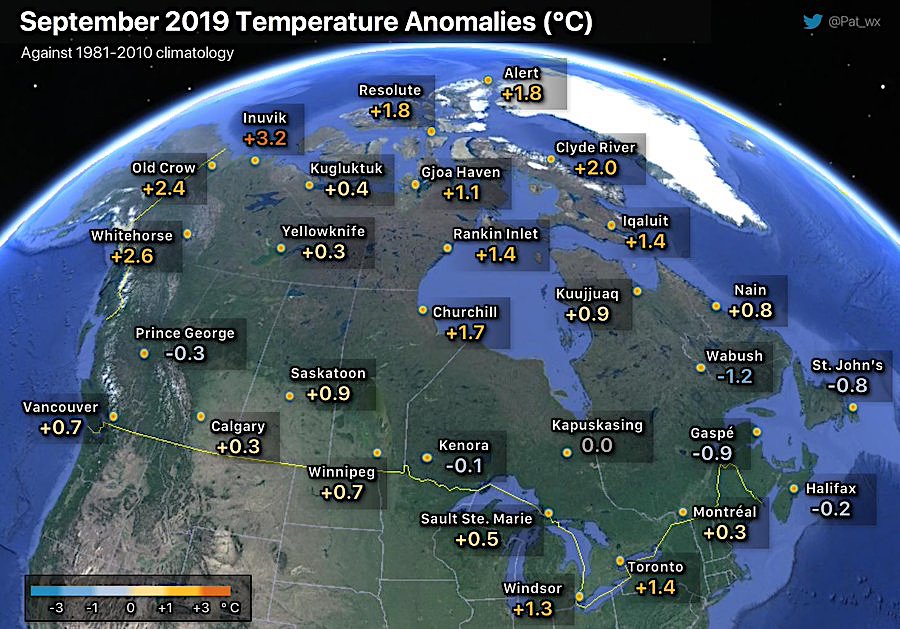 Clyde River also had its warmest summer on record, based on weather data going back to 1946, according to Duplessis.

Duplessis found the average temperature was 4.3 C, while the normal average for the month is 0.9 C.

Environment Canada predicts that the warm temperatures in northern Canada are likely to continue through December. 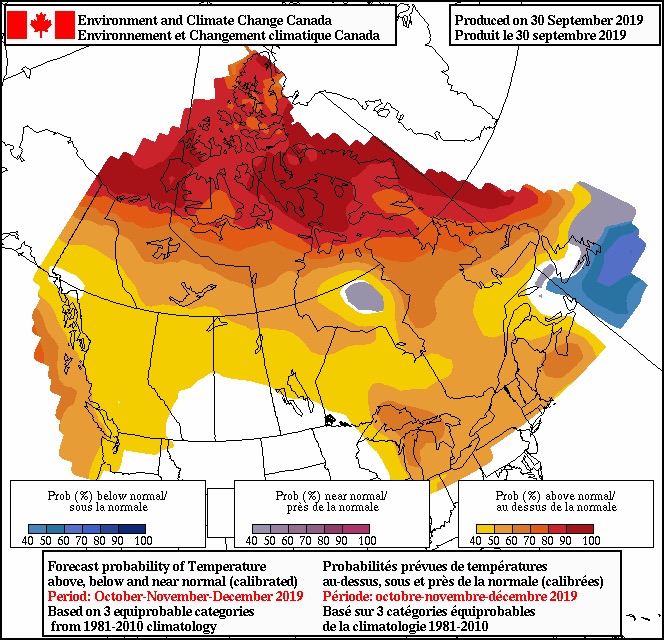 See the deep red over northern Canada? This map from Environment and Climate Change Canada shows a 90- to 100-per-cent probability of higher-than-average temperatures through December. (Map courtesy of ECC)

The impact of global warming is being felt in the Arctic, the most recent climate report from the International Panel on Climate Change also confirmed last month.

The IPCC noted that “Arctic surface air temperature has likely increased by more than double the global average over the last two decades, with feedbacks from loss of sea ice and snow cover contributing to the amplified warming.”

Sea ice is at its lowest recorded level for this time of year, judging from the satellite record, according to tracking by the Japan Aerospace Exploration Agency.