What do crime, cruise ships, science, seals and local politics have in common? Why, Twitter of course. 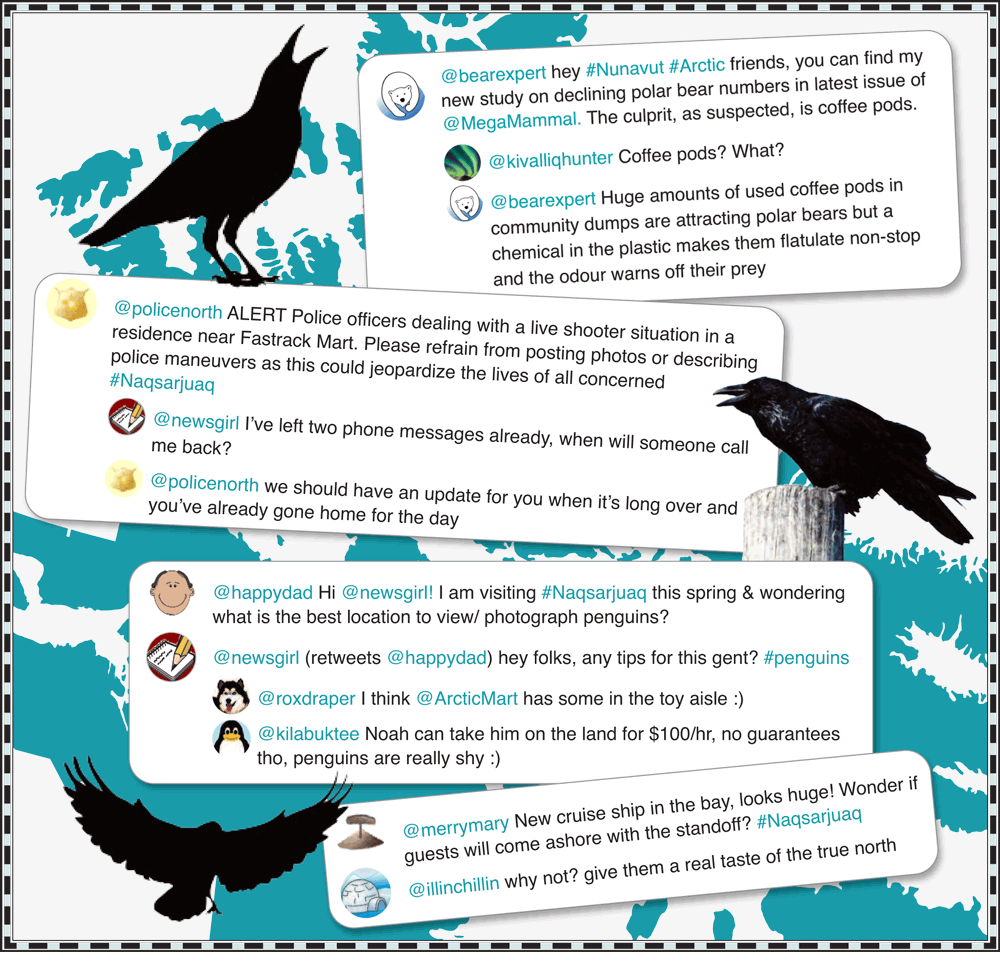 Keeping up with the conversation. (Illustration by Krista Klassen)

We are pleased to offer our readers some light holiday reading in the form of a short story by former Iqaluit resident and Nunatsiaq News staff member Lisa Gregoire. Please note that this is a work of fiction. Happy reading!

@illinchillin: started around a half hour ago, robbery? standoff?

@merrymary: I need to get diapers before work but don’t want 2 go past there

@rkadeyemi: apparently they crashed into each other during testing at the new pool, one fell on rec director, nearly knocked him out, haha #Naqsarjuaqfail (uploads Dumb and Dumber photo)

@roxdraper: I hear mayor bought them in vegas during tourism junket, at what cost? where’s #transparency? @Naqsarjuaqmayor?

@rkadeyemi: remember when mayor binkley rented the hot air balloon with the anti-smoking message on it & it caught fire? I could go on #Naqsarjuaqfail

@roxdraper: what about when lemieux was running the town in the 90s & they found him passed out in a city truck on the side of the road #Naqsarjuaqfail #reallyhappyhour

@rkadeyemi: wasn’t he caught years later at the airport with a VCR stuffed with cocaine? #clever #notclever

@merrymary: another cop car just drove up & they’re cordoning off the street, is that Jimmy Tugak’s place?

@illinchillin: Jimmy’s back in Qikiqtarjuaq, maybe Abe and Tiffany’s now?

@billybishop: not sure yet, plane now parked on apron

@roxdraper: I go to all #Naqsarjuaq council meetings and this is the first I’ve heard of it—where are the minutes?

@Naqsarjuaqmayor:discussed in camera so no minutes

@roxdraper: In camera? what? how much did they cost? why did you need two? who crashed them? how about some #answers?

@Naqsarjuaqmayor: It’s on the agenda for next council meeting; unfortunately I can’t attend as I will be at meetings in Nevada

@policenorth: ALERT Police officers dealing with a live shooter situation in a residence near Fastrack Mart. Please refrain from posting photos or describing police maneuvers as this could jeopardize the lives of all concerned #Naqsarjuaq

@newsgirl: I’ve left two phone messages already, when will someone call me back?

@policenorth: we should have an update for you when it’s long over and you’ve already gone home for the day

@animalfeelings: this is disgusting, seals just want to frolic in the sea, bounce balls with their noses & bark like dogs. Stop slaughtering puppies of the sea #animalcruelty

@earnestguy: we agree @animalfeelings, this is an abomination! send your dollars to Save Every Animal, a new fundraising campaign from Friends Rescuing Animals with Unbridled Devotion. Find us here: @fraud

@brigittebardot2: we’ve been working harder 2 save cuter animals for longer, don’t be fooled by @fraud, send your $$ to the real thing: Create Understanding To Elicit Support/Everyone Loves Little Seals. We’re at: @cutesells

@amautiq: I don’t know but it sounds like they’re all broke

@sealfood: like my deadbeat nephew, why don’t they just get jobs?

@amautiq: I think this is their job, raising money to pay themselves to raise more money

@sealfood: smart! maybe my nephew could get a job like that

@newsgirl: we could have helped with this announcement, why not alert media first?

@happydad: Hi @newsgirl! I am visiting #Naqsarjuaq this spring & wondering what is the best location to view/photograph penguins?

@roxdraper: I think @ArcticMart has some in the toy aisle

@kilabuktee: Noah can take him on the land for $100/hr, no guarantees tho, penguins are really shy 🙂

@happydad: thank you @kilabuktee! can you forward me Noah’s contact info?

@illinchillin: just to be clear, there are no penguins in the north

@illinchillin: Ya, getting too hot here so they all left in a mass migration to the south pole last year

@happydad: That’s astounding! I can’t believe I never heard about that!

@illinchillin: There’s lots people don’t know, like your skin doesn’t actually freeze in the cold up here because it’s a #drycold

@happydad: Ahhhh, OK good to know. What a relief! #arctictourism

@merrymary: (retweets @rebeccahuntly) hey @Joshie you could get everything here free!

@billybishop: WTF is up with potatoes? Currently $100 each at @Arcticmart!! (uploads photo) Even by northern standards that’s outrageous. Hey @Indigiminister! How can we afford to eat? @arcticmart #foodsecurity

@merrymary: Maybe they mean $10 each but forgot the decimal?

@arcticmart: Oops! Sorry for the confusion! We forgot to add the new federal remote food subsidy. Potatoes are actually $87 each. Happy mashing!

@policenorth: ALERT Police would like to remind city residents to remain clear of police tape on Arlooktoo and Qimmiq streets. Situation is unpredictable and potentially dangerous #Naqsarjuaq

@newsgirl: can we please get an update on what’s happening? It’s been five hours

@policenorth: no updates at this time

@newsgirl: but you just gave an update on social media

@policenorth: that was a reminder and an announcement, not an update

@newsgirl: could I ask you some questions about your announcement?

@policenorth: we don’t have time at this time

@bearexpert: hey #Nunavut #Arctic friends, you can find my new study on declining polar bear numbers in latest issue of @MegaMammal. The culprit, as suspected, is coffee pods.

@bearexpert: Huge amounts of used coffee pods in community dumps are attracting polar bears but a chemical in the plastic makes them flatulate non-stop and the odour warns off their prey

@kivalliqhunter: you can’t be serious

@biofile: no actual footage but anecdotal evidence from the field & based on our biopsy dart sampling & extensive lab model simulations, it’s a strong hypothesis

@kivalliqhunter: When I was in school, our teacher taught us a hypothesis is a theory not yet proven as fact

@bearexpert: @kivalliqhunter we have footage of sedated bears during flatulation events; not only do the caribou disperse, so do birds, foxes, hares & wildlife biologists, proving coffee pods have negative impact on bears & environment #truestory

@kivalliqhunter: I’m going to have a coffee and go hunting. I’ll sniff around for clues 🙂 #inuitknowledge #qaujimajatuqangit

@newsgirl: Multiple shots fired from city home during standoff: “We thank police for their continued vigilance and restraint during this tense time,” says Naqsarjuaq mayor. Read our story here: @arcticnews

@newsgirl: If anyone reading this has been evacuated from standoff neighbourhood & wants to share their story, email me: GGreen@arcticnews.ca

@merrymary: New cruise ship in the bay, looks huge! Wonder if guests will come ashore with the standoff? #Naqsarjuaq

@illinchillin: why not? give them a real taste of the true north

@Naqsarjuaqmayor: we’ve been in contact with ship’s social convenor and adjusted itinerary to avoid standoff area. Guests to be shuttled to city’s most secure building for welcome, cultural showcase, and to buy crafts/art

@illinchillin: my sister is part of the showcase, what secure building?

@roxdraper: the story doesn’t say why the plane’s still here, why haven’t they left yet?

@billybishop: all I know is everyone’s off the plane but with no customs area at the airport, they’ve had to bus them to a secure building, location unknown

@jerryjimmo: how’s the cruise been so far?

@merrymary: I just saw a woman in @Arcticmart who looked like Margaret Atwood! Maybe she was on the cruise? (uploads photo) #Naqsarjuaq #handmaidstale

@newsgirl: Neighbour feared for her life, standoff enters seventh hour: “They kept to themselves, we didn’t really know them” Read our updated story now @arcticnews

@neverfear: We made it!!! First ever backwards unicycle trek to the North Pole. This is us 4 days ago at the top of the world! (uploads photo) Now on board Coast Guard ship and heading home @arcticnews

@newsgirl: Hey @neverfear can we use this photo on our website? If so, can you name people in the shot?

@neverfear: sure! From L: first 6 people are personal trainers & chefs, next 5 are Italian unicycle techs, green jacket is meditation guru, then ice guide, me & Terry, next 7 are guides from @Naqsarjuaqtrips, our masseuse & last 4 carried our stuff on skis

@newsgirl: wow, big team. how much did it cost?

@neverfear: We got $870,000 in sponsorships (thanks @uniworld!) and we got a federal grant for $120,000 to do experiments on gear lubricants in extreme cold so around $1M I guess. A bargain, considering all we accomplished.

@newsgirl: How about a quote for the caption?

@neverfear: “There were times we thought of giving up. My jacket was a bit too big, I had to keep changing my headlamp batteries & my hands got cold & we ran out of cardamom for the chai. At times like that you discover what you’re made of.”

@newsgirl: Thanks! have a safe trip home

@neverfear: Will do! And to all those northern kids, when times get bleak, think of what we endured & don’t quit. Also we’ll be holding free unicycle tune-ups when we stop in #Naqsarjuaq next week #givingback

@newsgirl: I’ll try to find out

@jerryjimmo: what’s with all the booze? are they performing in a liquor store?

@edithwhiteside: sorta, it’s a liquor warehouse. last minute change of venue from the community hall. somebody said because of a standup? Comedy show there I guess. Wish we could have seen it!

@jerryjimmo: there’s some other singing in the background there, sounds foreign. is that the local language?

@edithwhiteside: That was coming from another room. Could be Inuktitut but sounded Russian to me. Whoever they were, they were having a really good time

@policenorth: The standoff and evacuation near Fastrack have ended. There will be no further updates. We thank the public for their patience and understanding.

@merrymary: OMG! why does this keep happening? There are so many hurting people here, we need help

@newsgirl: third standoff this year, something has to give

@edithwhiteside: Back on the ship after an unforgettable trip to #Naqsarjuaq. Thank you for your warmth & hospitality! And look (uploads photo) the northern lights came out just for us.

This work was made possible with help from the Canada Council for the Arts and The Banff Centre for Arts and Creativity.