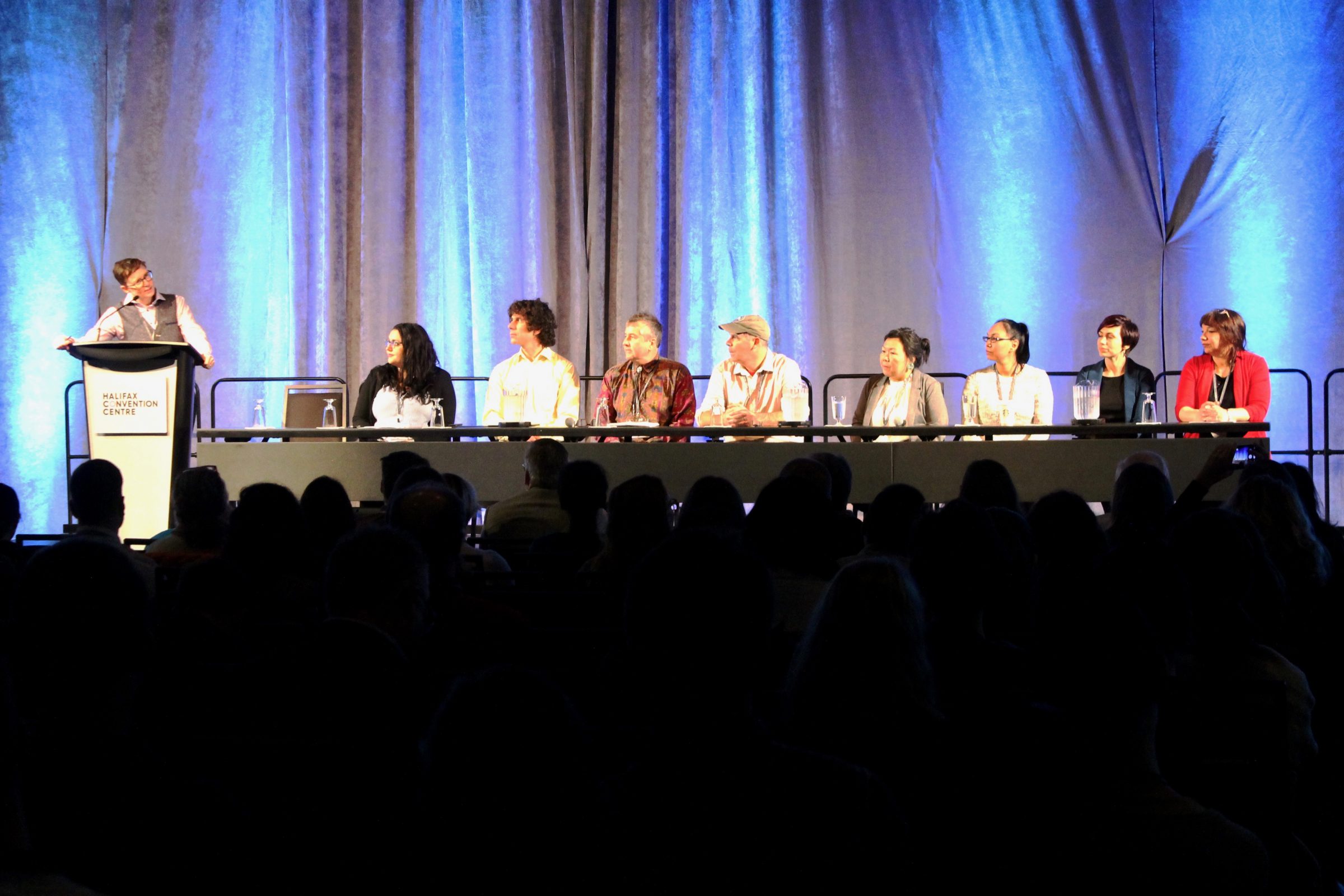 Some members of the ArcticNet board spoke on Wednesday, Dec. 4, about the new North by North program being launched in the coming months. (Photo by Elaine Anselmi)

HALIFAX—A new program developed by ArcticNet will put research dollars in the hands of Inuit and northern colleges.

The North by North program was proposed by ArcticNet, a hub for Canadian climate change research, in its latest federal funding proposal, which was approved in April.

The specifics of the program are still being worked out before it officially launches. That could happen anytime between now and April 2020, said Mary Ellen Thomas, a senior research officer at the Nunavut Research Institute at Nunavut Arctic College.

She, along with ArcticNet representatives, spoke about the new program during a plenary session on Dec. 4 at the ArcticNet Annual Scientific Meeting in Halifax.

Thomas describes the program as a new solution to an old problem: how to make northerners more involved in northern research?

The program has a budget of about $9 million over five years, divided between two streams.

Through the Inuit Nunangat Research Program, Inuit can apply for funding for a research project on the subject and method of their choosing.

“You know the feeling when you’re sitting around a table and everyone is talking about you?” she told Nunatsiaq News after speaking at the plenary. “That’s how we feel. We’re being talked about, but at the same time excluded.”

This program could help advance Inuit self-determination, Grey said, by allowing more Inuit to do research on their own terms.

And the years of accumulated knowledge carried by Inuit, Grey said, are especially critical as the climate rapidly changes, in the North more than anywhere else.

“This is giving more power to Inuit, and it will enrich southern researchers and increase global knowledge,” Grey said.

But southern researchers could still be eligible for this funding, provided they have community support, said Eric Loring, senior environment and health researcher with the Inuit Tapiriit Kanatami.

“We heard feedback from communities that they’ve built good relationships with researchers and want it open to them,” said Loring. But, he added, those researchers would have to prove strong partnerships at the community level and plans to build Inuit research capacity into their work.

Project proposals will be reviewed by ArcticNet’s Inuit advisory council and will then be recommended for approval by the board of directors.

The other stream under North by North provides funding to the three territorial colleges for research.

Next May, Yukon College will transition into becoming Yukon University. Brian Horton, with the college’s Yukon Research Centre, told attendees at the ArcticNet conference that two new research positions would be posted in the new year, stemming from this funding.

“We’re really excited about this ArcticNet expansion,” he said, welcoming a dedicated budget for research in the North.

Aurora College in the Northwest Territories is also undergoing a change to become a polytechnic university.

“We are at a time when we must increase our research capacity,” said Joel McAlister of the college’s Aurora Research Institute. “The North by North funding will go a long way into building that capacity.”

Noting that northern cities are rife with PhDs, Thomas said this funding could mean that those people can step away from their day job for anywhere from a year to five years, to get back into research.

And through that, she said, they could work with the college on developing new programs for future students.

The two streams of North by North, while separate, are complementary, said Jackie Dawson, ArcticNet’s scientific co-director at the University of Ottawa.

Particularly in the territories, where the colleges are located, there will be collaboration, Dawson added.

Dawson emphasized that the North by North program will be a positive addition to the work already being done through ArcticNet: “This is a fundamental, important next step for Arctic science, period.”

Dawson hoped to see other funding agencies step up and match the program, investing more in northern research by northerners.