As Nunavut’s 20th approaches, Hickes reflects on 20 years of growth 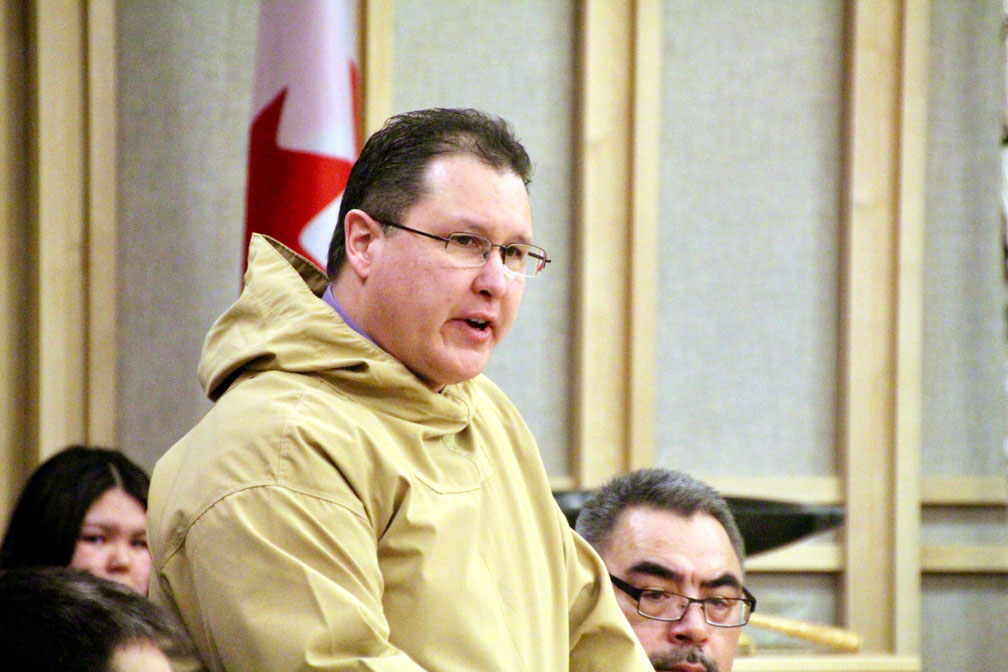 “The story of Nunavut is a story of growth. Everywhere you look, we’re doing more,” Finance Minister Geroge Hickes said today in his budget speech. (Photo by Beth Brown)

With Nunavut’s 20th birthday fast approaching, Finance Minister George Hickes used his first budget speech today to list how the territory has improved and grown since it was born on April 1, 1999.

“The story of Nunavut is a story of growth. Everywhere you look, we’re doing more,” Hickes said, citing high school graduation rates, annual rates of growth in gross domestic product and $2.4 billion worth of infrastructure construction.

Within that list, he singled out growth in Inuit employment at the Government of Nunavut for special emphasis.

He returned to that theme near the end of the speech, when he said the new Department of Human Resources, set to launch on April 1, will finalize what he described as “a long-term master Inuit employment plan,” which will guide the GN until 2023.

In doing so, he referred again to the latest Inuit employment numbers, which show that as of Dec. 31, 2018, “the actual number of Inuit working for the government and our corporations reached 1,770,” he said.

“It’s worth repeating. Twice as many Inuit work for the Government of Nunavut today compared to 20 years ago,” he said.

To give the speech, Hickes stood in a pair of new CSA-approved steel-toed workboots to honour his father, George Hickes Sr., a former speaker of the Manitoba legislature. 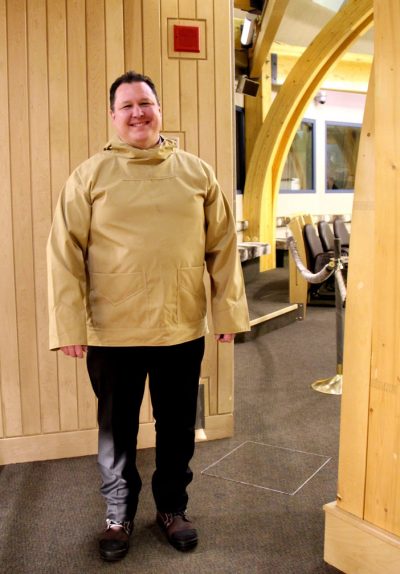 Finance Minister George Hickes with the pair of new CSA-approved steel-toed workboots he wore during his budget speech to honour his father, George Hickes Sr., a former speaker of the Manitoba legislature. Hickes will donate them to an apprentice. (Photo by Beth Brown)

A reporter once asked Hickes Sr. if he was proud that his son had followed him into politics.

“He replied that he would rather I leave my own footprints, and that they had better be in workboots,” Hickes told MLAs.

Prior to giving his speech, Hickes Jr. told reporters in a budget lockup that he plans to donate the boots to a Nunavut resident apprenticing to work in a trade.

Revenues down from last year

That will produce a tiny deficit of $12 million, and takes into account the GN’s normal contingency fund of $30 million, he said.

The deficit represents only one-half of a per cent of the GN’s total spending, but it’s still a cause for concern.

“Looking at it another way, for every $100 we spend, we’re short about fifty cents. That’s not big, but it does add up,” Hickes said.

It also means the GN must find ways to reduce spending and increase revenues, he said.

“As I mentioned earlier, the demand for public services continues to rise each year. That growth in demand, coupled with less revenue, means our needs are outpacing our ability to pay for those services,” he said.

“During the territory’s healthy economic growth we have continued to see statistics indicate declining quality in health among Nunavut Inuit. We are seeing an increase in the use of social assistance in non-decentralized communities with no plan on how to distribute the wealth across the territory,” NTI said.

“The minister has reported that 100 new social housing units will be constructed with no explanation as to why fewer units are being constructed,” NTI said.

“On a day we should all be planning for an improved territory, we find ourselves having to point out yet again that Government of Canada needs to invest in Nunavut or see their precious budgets suffer under growing social assistance and social housing needs,” NTI President Aluki Kotierk said in a release.

Of all the departments and agencies, the Department of Health will get the biggest share of the 2019-20 budget: $431 million.

On better elder care, Hickes said the GN is working on a “a comprehensive long-term care plan” and, as he has said in the past, will look at partnerships to build more facilities in communities.

As for a highly anticipated addictions treatment facility, Hickes said the GN continues to work with Nunavut Tunngavik Inc. and the federal government on a “recovery centre,” Hickes said.

Some individual spending items include:

• $4.6 million in new money for treating addictions and trauma.

• $2.8 million for law enforcement. This is to help alleviate the RCMP’s staff housing deficit across the territory, an official said.

• $2.7 million more for medical travel, to allow more mothers and guardians to bring infants with them on medical trips.

• $2 million more for emergency shelters, transitional housing for women, improved emergency services for women and children. A GN official said about $1 million of this will go to shelters, about $800,000 will go to more family violence and training initiatives, and $120,000 will go to the Qulliit Nunavut Status of Women Council. The GN also wants to start putting into place transitional housing for women around the territory, Hickes told reporters.

• $1.6 million for Team Nunavut’s participation at the 2020 Arctic Winter Games.

• $700,000 for more clinical positions in communities for screening and testing tuberculosis.

• $600,000 in new money for Qikiqtani General Hospital for improved services and to plan for a pediatric unit.

As to what Nunavut plans to do with the approximately $15 million worth of carbon tax revenue that it’s set to receive from the federal government this year, Hickes said the GN is still looking at “options.”

Under an agreement with Ottawa, the federal government will bear the cost of collecting its carbon tax in Nunavut, but the GN will keep 100 per cent of the revenue and make its own decisions on how to spend it

In May 2018, David Akeeagok, then the finance minister, said the government would use its 2019-20 budget to reveal details of how it plans to use that money.

But officials said in a budget lockup today that carbon tax revenue information was not included in today’s budget because the dates for when Nunavut will receive the money have been moved to July.

Hickes reminded the public that in Nunavut, diesel generators and aviation fuel are exempt from the carbon tax, but that it applies to everything else, including gasoline.

“We aim to minimize the effect of federal carbon pricing on the cost of living and doing business in Nunavut,” he said.

“I look forward to sharing the details of this revenue return before the federal carbon-pricing program takes effect in July.”

And on Nunavut’s growth since 1999, Hickes cited the following figures:

• Spending on post-secondary education and skills training since 1999: $100 million.

As for the GN’s legislated debt cap of $650 million, Hickes said Nunavut’s total long-term debt peaked at $435 million this year, but will slowly begin to fall starting next year.

“By not using credit to pay for our daily needs, and by managing our debt carefully, the government earned a good credit rating. In fact, only three provinces enjoy a rating better than ours,” Hickes said.

— With files from Courtney Edgar