As Trudeau confirms existing housing money, Nunavut’s premier makes the best of it 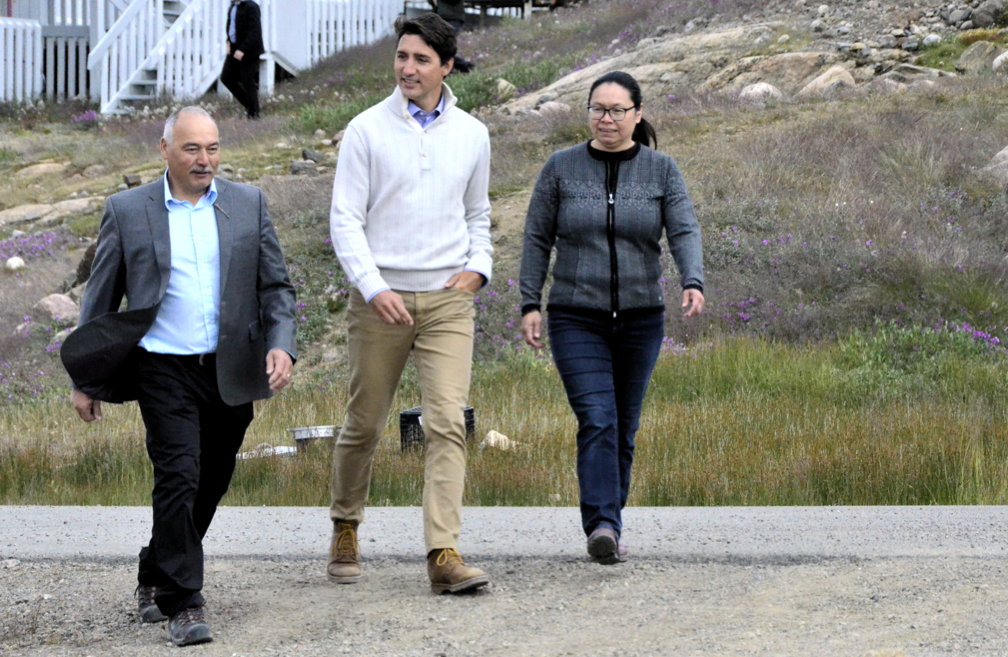 Nunavut Premier Joe Savikataaq knows the territorial government’s not getting nearly enough money to meet its social housing construction needs, but with Prime Minister Justin Trudeau standing beside him this past Aug. 2, he was much too diplomatic to criticize the Government of Nunavut’s federal funders.

Following the completion of deals signed on Aug. 1 to create the Tallurutiup Imanga protected marine area and the start of a new protected area called Tuvaijuittuq, Trudeau’s staff summoned reporters the next morning to an outdoor press conference held at a vacant lot in Happy Valley.

There, Trudeau announced confirmation of how much social housing construction money will flow into Nunavut housing over the next eight years: $290 million.

“We recognize that this is a big step forward that is going to make a huge difference,” Trudeau said.

But those funds are made up mostly of previous commitments made in the federal government’s 2016 and 2017 budgets.

And the money doesn’t come close to helping Nunavut get all the housing it needs. The Nunavut Housing Corp.’s latest numbers estimate a need of about 3,100 new units.

That represents about 5,000 people, or 2,500 families, in Nunavut who are in need of adequate housing.

“The funding will give us approximately 83 houses a year, so if you do the math you can see it will take us quite a while to get to 3,100. We’ll never get there,” Savikataaq said.

That 83-houses-per-year estimate isn’t new. Savikataaq told APTN this past March that his government expects to build 83 housing units in the 2019-20 fiscal year.

Though the numbers will likely vary a little from year to year, that’s what Nunavut can expect to build annually, between now and about 2026 and 2027.

The bulk of Nunavut’s housing construction money was committed by the federal government in 2016—$76.7 million—and in 2017—$240 million, topped up by contributions from the GN.

Nunavut received no funds for social housing construction in 2019, prompting George Hickes, the Nunavut finance minister, to say this last March: “The lack of Nunavut-specific measures is disappointing, and remains critical in successful nation-building.”

But Savikataaq, this past Friday, said it’s still useful that Trudeau took the time to talk about Nunavut housing in Iqaluit.

“In my opinion, it means the federal government is giving us priority. It’s the prime minister making the announcement and that’s a good thing,” Savikataaq said.

“It’s still a positive thing, because it brings it to the front and starts the conversation and lets everyone know about our desperate needs for housing in Nunavut.”

As for homelessness, Savikataaq said that while the city government is “doing its part” in Iqaluit, there’s an obvious need for homeless shelters, transitional houses and emergency shelters in outlying communities.

He said government officials have talked a lot about that, but he said the GN only has so much money and has to direct it to where it’s needed the most.

As for Nunavut Inuit associations and corporations, which are now raking in cash in all three regions from mineral production royalties, Savikataaq said there have been ongoing talks about their getting involved in housing, but nothing concrete has happened.

The 2019 Inuit Nunangat Housing Strategy, co-developed by the federal government and by Inuit Tapiriit Kanatami, said the Inuit organizations in Nunavut “are keen to help address the severe housing shortage in Nunavut.”

But the plans the Nunavut Inuit orgs are looking at do not appear to be aimed at the kind of low-income people who generally live in subsidized public housing.

Instead, the Inuit orgs of Nunavut are looking at affordable homeownership for Inuit who now live in government, business or private rental housing.

“The program would also support and promote home ownership as a means of wealth generation and career creation that would further lessen the ﬁnancial burden on governments,” the strategy said.

In 2016, 56.4 per cent of Inuit lived in overcrowded homes and 34.3 per cent lived in homes needing major repairs.

And in 2017, the Canada Mortgage and Housing Corp. reported that within the private market in Iqaluit, the average monthly rent for a two-bedroom housing unit was $2,597.