80-metre trawler will be largest owned in Canada, says CEO 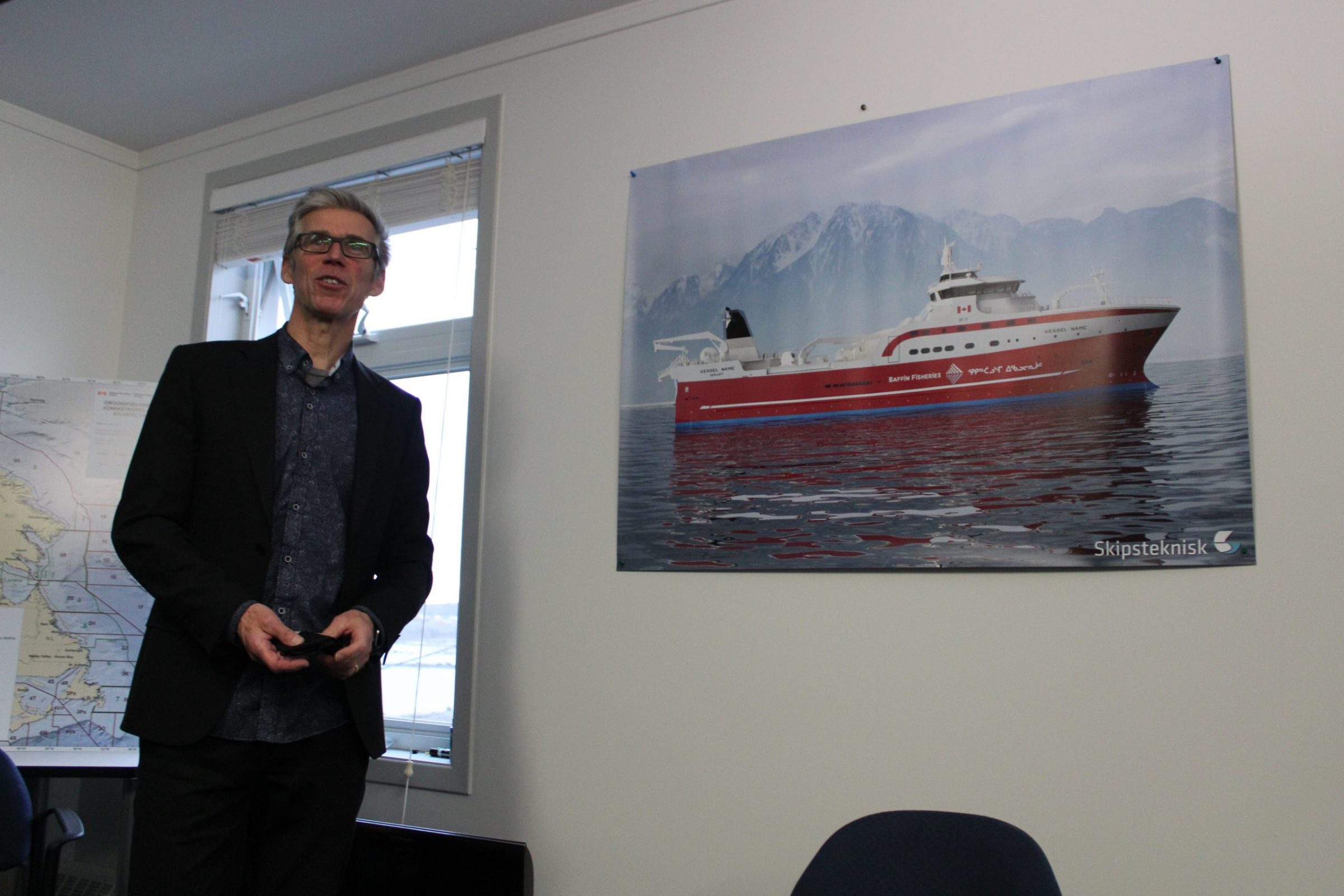 Baffin Fisheries CEO Chris Flanagan presents the company’s newest vessel at a news conference at the company’s office in Iqaluit Friday morning. Flanagan says the ship will be safer and more cost efficient than the 34-year-old vessel it’s replacing. (Photo by David Venn)

Baffin Fisheries says it’s buying what will be the largest Canadian-owned fishing vessel.

The new ship will be much safer and cost efficient than the vessel it replaces, says CEO Chris Flanagan.

The company held a news conference Friday morning to announce the newest addition to its fleet: a $72.5 million, 80-metre stern trawler that can carry a max of 1,320 tonnes of frozen turbot or 930 tonnes of cold-water shrimp.

The trawler will be designed by Norwegian company Skipsteknisk A/S and constructed in Turkey by Tersan Shipyard. Baffin Fisheries is expecting it to be delivered in February 2024.

“We’re very, very proud of this vessel,” Flanagan said. “It will add a lot of benefits both financially and in terms of employment for Nunavummiut and Inuit.”

Although the ship calls for a 34-person crew, the company believes it can operate with 30, which leaves extra spots for mentorship and training programs for engineering support, first and second mate, cook, factory and trawl boss positions.

Flanagan said the company employs around 50 to 60 Inuit on the company’s vessels throughout the year.

“But I will say, there’s lots of room for improvement,” he said. “We really are in need of more workers from Nunavut.”

Many Inuit still don’t consider the offshore fishing industry as an employment opportunity, he said.

“So it’s challenging to make people aware of the fishery, to get them into the training and then to work on vessels which are going to take them away from their community for months or many, many weeks at a time,” Flanagan said.

Adamee Itorcheak, Iqaluit’s representative on Baffin Fisheries’ board of directors, said he wants to see more Inuit employed by the company.

“When we start really benefiting is when we have the jobs,” he said.

Itorcheak, whose son works for the company, said he appreciates how much safer the new vessel will be.

Safety features on the new vessel include a more modern system for launching a fast rescue craft and winches that are electric, rather than hydraulic, removing the risk of oil spills on the deck, Flanagan said.

“The deck is the most dangerous place. So if you’ve got a risk of oils on the deck, it’s a riskier environment. Electric winches take that away,” Flanagan said.

Scotiabank is loaning Baffin Fisheries $60 million for the ship and the Canadian Northern Economic Development Agency is loaning $3 million.

The company also went to several Canadian and European banks to secure loans for the vessel, and, although fisheries and Nunavut businesses often have a hard time securing such funding, the company had multiple offers, Flanagan said.

The vessel, which has yet to be named, will replace a 34-year-old old vessel called the M.V. Inuksuk, which carries less than half of the new vessel’s capacity.

Between reducing maintenance costs and having less transits to the east coast, the new vessel will offer “an extreme savings in fuel and time,” Flanagan said.

In the future, Flanagan said the ship and other marine infrastructure, such as a forthcoming deepsea port in Qikiqtarjuaq, will create a wealth of new possibilities to the company.

Right now the company offloads its catch in Newfoundland, which can sometimes take six days. But the federal government’s announcement in August it would spend $40 million to build a deepsea port in Qikiqtarjuaq would provide another location to land the vessel, Flanagan said.

Also within the next decade, Flanagan said it might be possible to start catching yellowtail in the south and redfish, which currently has no proven commercial viability.

Itorcheak said he wants the company to be able to expand into new fishing spots.

The company’s catch limits and locations are regulated by the Department of Fisheries and Oceans. It primarily deals with Arctic shrimp and turbot and fishes mainly off the northeast coast of Baffin Island.