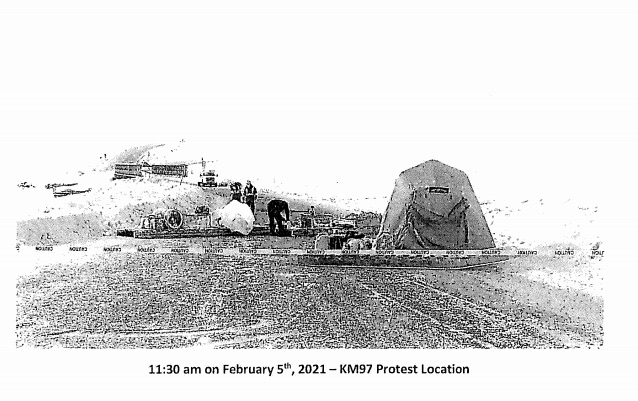 This photo shows the blockade of the road that runs from Baffinland’s Mary River iron mine to the port at Milne Inlet. The image was among the company’s submissions to court last week in its efforts to secure a court order to have protesters vacate its airstrip. (Photo from Nunavut Court of Justice)

Baffinland Iron Mines Corp. has put a price tag on the recent weeklong blockade that brought work to a standstill at its Mary River mine. The blockade could have cost the company more than $2 million per day, for a total exceeding $14 million, based on information in documents the company filed in court.

The company provided this information in an affidavit from its CEO, Brian Penney, last week during Baffinland’s efforts to secure a court order to have protesters vacate its airstrip.

The protesters oppose a proposed expansion of the Mary River mine that would double its output. The proposal is making its way through a Nunavut Impact Review Board public hearing, which is adjourned until April.

Legal wrangling continues over whether to extend an injunction Baffinland had secured, now that the protesters have decamped.

Baffinland asserts that it needs assurance its operations won’t become paralyzed by another blockade. The protesters, meanwhile, maintain that an injunction is unnecessary, because those involved have returned home.

In the meantime, court documents provide the company’s account of its interactions with the protesters, and of the blockade’s impact on its bottom line.

Baffinland hauls approximately 20,000 tonnes of iron ore every day along the road connecting its mine to its port at Milne Inlet, Penney said in his affidavit. The company receives advance payments for the ore delivered to port, at market rates of above $100 per tonne, he said.

This lost revenue — which works out to approximately $2 million per day — “is significant and our only source of immediate cash,” Penney’s affidavit states.

The company has “very limited, if any, ability to make up the shortfall once the road blockade is cleared,” Penney wrote. “This is because our truck transportation operations are running at capacity with very little room, if any, to increase daily trucking volumes to catch up for lost days of trucking.”

The cost of paying the mine’s employees and providing accommodations on site, meanwhile, is “hundreds of thousands of dollars per day,” Penney wrote.

A lengthy roadblock would have led to “a large number of layoffs for our employees and for the employees of contractors who work for us,” he said.

Fresh food dwindling after a week

The mine was also running low on fresh food by the end of the weeklong blockade, although it had enough non-perishable food to last a month, according to an affidavit by Shawn Stevens, the mine’s manager of health and safety.

The mine usually receives twice-weekly flights to supply fresh food.

If the blockade had lasted a month, “the supply of food would likely be near depleted,” Stevens said.

Stevens also described the company’s interactions with the protesters.

Over the following three days, Stevens said, Baffinland staff helped the hunters in a variety of ways: “providing numerous meals, repair of a snowmachine, providing use of a satellite phone … and the provision of more than 50 gallons of diesel fuel,” his affidavit states.

During this time, Stevens said the hunters caught seven caribou in the area.

The airstrip blockade comprised two snowmobiles, two qamutiks, or sleds, and a campfire in the middle of the airstrip, Stevens said. The road was similarly blocked with a tent, a snowmobile, a qamutik and a campfire, he said.

Stevens said that he approached one protester and asked what the protest’s purpose was, and “he responded saying we were on his land and had no right to be there.”

Stevens said he asked the protesters to move the fire to the side of the runway to avoid damaging the airstrip. “His repeated response was he was on Inuit land and could do whatever he wished.”

“He mentioned it was a peaceful demonstration and they had no ill intent towards [Baffinland] employees. I told him their actions were scaring our employees, to which he responded that was not their goal.”

Stevens said he later asked protesters to move so that the airstrip could be graded to allow aircraft to land but they refused.

But the protesters did allow a bus carrying medical supplies to pass, he said. And he said that protesters told him they would be willing to move the blockade to allow a medevac flight to leave.

The protesters asked if they would continue to receive food and fuel from the company, Stevens said. He said they responded that they would receive more supplies if they cleared the airstrip.

“I did observe the protestors to be in possession of firearms, though they were not used in a threatening manner at all,” he wrote.

Protesters ‘contest the tenor and accuracy’ of Baffinland’s statements

Bruce Uviluq, an articling student working with the protesters’ lawyer, also submitted an affidavit, disputing some of Baffinland’s assertions.

He said the protesters offered to let flights leave, but the company wanted to make sure they had stopped blockading the airstrip first.

Uviluq also said the protesters were willing to allow airstrip maintenance to occur once a week, and to allow flights to take off and land during that time.

And Uviluq disputes that the protesters damaged the runway by setting a fire on it.

The protesters’ lawyer, Lori Idlout, said in a legal brief that her clients “contest the tenor and accuracy of the facts” in the affidavits of the Baffinland employees. She is set to cross-examine both Penney and Stevens on Thursday and Friday.