“If we can’t protect Inuit culture and conditions, we won’t do it” 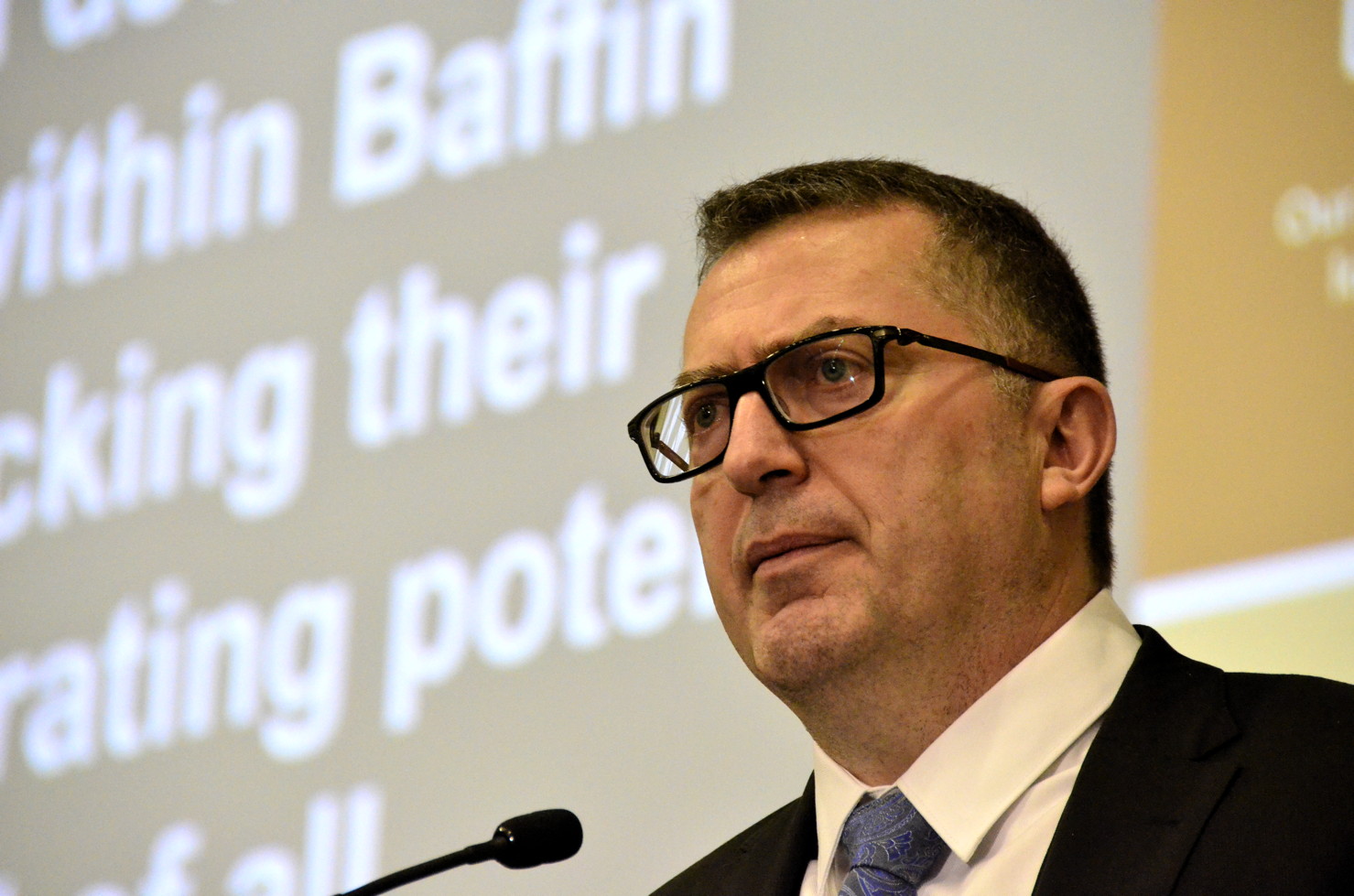 If the activities of the Mary River iron mine cause damage to people or the environment, then Baffinland Iron Mines Corp. won’t do them, the company’s CEO, Brian Penney, told a business audience at the Northern Lights trade show in Ottawa this past Feb. 6.

He also promised that when Mary River becomes North America’s largest iron producer, the mine will employ more Inuit than any other private company—and will lower its greenhouse gas emissions.

“We will be the lowest GHG route to virgin steel. We will improve our environmental footprint,” he said.

In his presentation at the conference, Penney didn’t talk about the Nunavut Impact Review Board’s stalled public hearing on Baffinland’s Mary River expansion plan, which ground to a halt this past November.

That public hearing may resume after a series of gatherings scheduled to start in Iqaluit in March 16, culminating in a March 25 pre-hearing conference at which participants will try to iron out various unresolved questions about the company’s expansion plan.

Penney also didn’t talk about the 16 charges the company now faces under the Nunavut Mine Health and Safety Act, laid last December by the Workers’ Safety and Compensation Commission following a haul truck crash that killed a worker.

Those charges, as yet unproven, are still before the courts.

But Penney did talk about two other subjects: what makes Mary River special and why Baffinland needs to expand annual production from last year’s six million tonnes of ore up to 30 million tonnes at some point in the future.

And that, as Baffinland has asserted many times in the past, is because the Mary River needs to produce greater volumes of ore to become financially viable.

“We measure success in tonnes, not ounces, and we need millions and millions of tonnes to be successful. And we ship all these tonnes in a three-month period. No other iron ore producer, to my knowledge, does this,” Penney said.

That “three-month period” means the ice-free season during which ore-hauling vessels are able to come to Milne Inlet to pick up stock-piled ore for delivery to customers in Europe.

At the same time, their customers make use of that product through the entire year—and Baffinland must be able to guarantee they can make deliveries to them on time.

“If we don’t deliver, the customer could be in trouble and they won’t be our customer next year,” he said.

But to get those “millions and millions of tonnes,” the company needs to produce more ore, at a faster rate of production, using a more powerful and efficient mode of transportation to get it to port: a railway.

That 110-kilometre railway from Mary River to Milne Inlet lies at the heart of Baffinland’s phase two expansion proposal.

To explain how it would work, Penney showed a video illustrating the design of the railway, as well as the massive new ship-loading infrastructure that would be built at Milne Inlet.

That ship-loading system, acquired from ThyssenKrupp of Germany, includes two 10-storey pre-fabricated buildings and a number of small structures, shipped from last year from Bremerhaven, Germany.

“It’s one of the largest ship-loading systems built for an iron ore project anywhere in the world,” Penney said.

He also said it’s the largest single sealift of equipment every undertaken in the Canadian Arctic.

Assuming the federal government approves the expansion plan, the fleet of 90-tonne haul trucks that Baffinland used to ship about six million tonnes of ore last year to Milne Inlet would be replaced by three train sets.

That would bring iron ore production up to a rate of 12 million tonnes annually, creating the need for up to 176 voyages a year from ore carrying vessels.

And after the northward railway to Milne Inlet is completed, the company would turn to the south and build a railway to a port at Steensby Inlet, through which an additional 18 million tonnes a year would be shipped.

That would bring its total production up to 30 million tonnes a year.

But soon after that, they opted for what they call their “early revenue phase”—a short-term truck route to Milne Inlet.

“Everyone in the world who cares about iron ore and steel production has their eyes on Baffinland,” he said.