Baffinland fends off criticism at technical meeting in Iqaluit 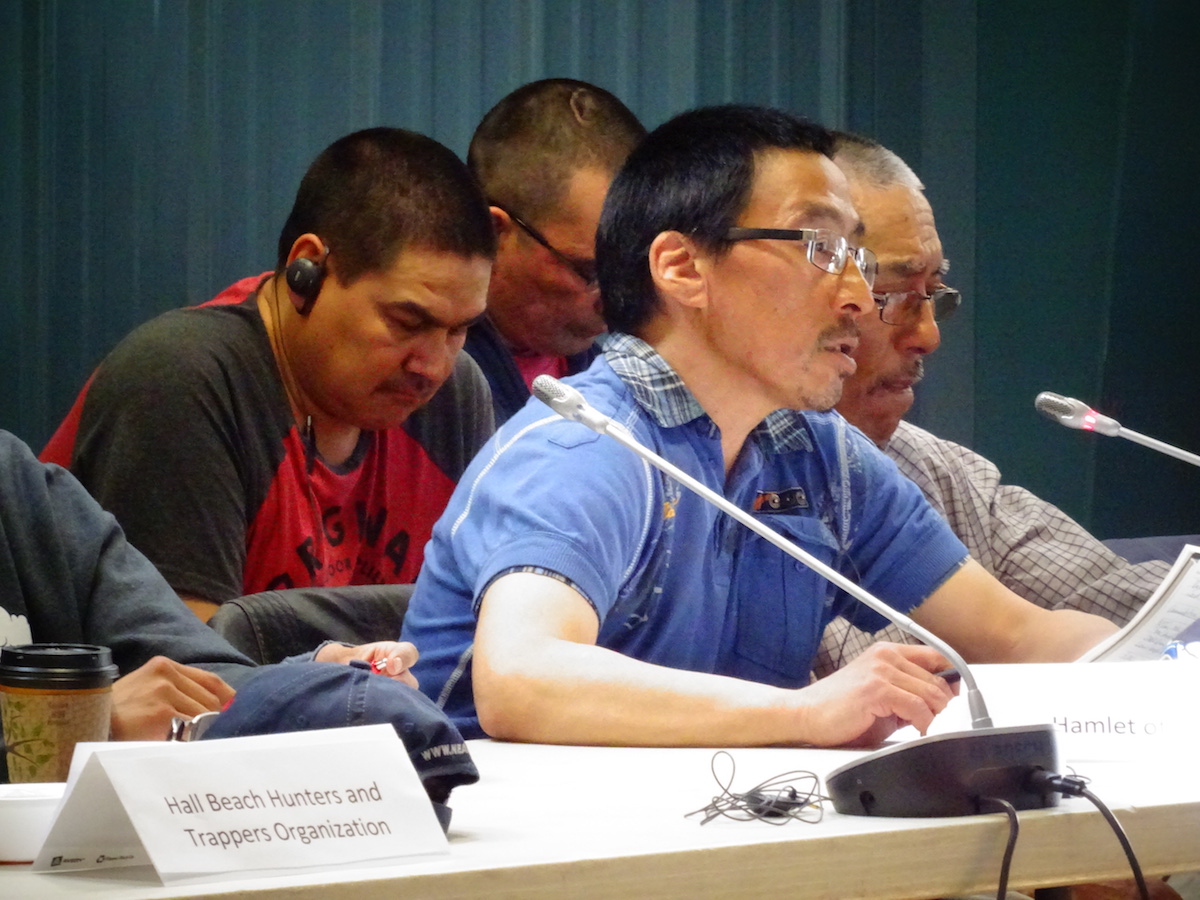 Peter Ivalu, an Igloolik councillor and member of the hamlet’s working group on the Mary River project of Baffinland Iron Mines Corp., speaks June 17 at the second technical hearing on the mine’s proposed expansion. Ivalu, along with others at the meeting, had some criticism for Baffinland’s cumulative effects assessment. (Photo by Jane George)

If critical comments were snowballs, Baffinland Iron Mines Corp. would have ducked often for shelter on Monday.

Volley after volley of criticism came towards Baffinland during the first day of this week’s technical meeting on the company’s expansion plans for its Mary River iron mine on northern Baffin Island.

The agenda for Monday, day one of the three-day meeting in Iqaluit, was largely devoted to the topic of cumulative effects—that is, the mine’s long-term impact on everything from caribou to sea-ice stability near communities, and the impact of a future railroad running all the way to Steensby Inlet.

These cumulative effects, among other topics, were never properly discussed during the first technical meeting called by the Nunavut Impact Review Board in April.

That was because before that meeting Baffinland had not yet filed many reports, including its updated cumulative effects assessment, ice-breaking assessment and simulation modelling report, just to mention a few.

After the NIRB called a second technical meeting to address the gaps, the Qikiqtani Inuit Association, which represents Inuit in the five north Baffin communities impacted by Mary River, asked for more discussion on the project’s cumulative effects.

The QIA said it wanted to learn more about the future impact of a proposed railway system that could run all the way across Baffin Island from Milne Inlet to Steensby Inlet, as well more discussion on Inuit Qaujimajatuqangit. 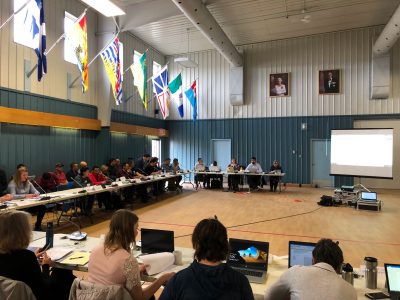 Representatives from Inuit groups, governments and non-profit organizations gather June 17 in Iqaluit’s Cadet Hall for the NIRB technical meeting on Baffinland’s proposal to expand its operations at the Mary River mine. (Photo by Jane George)

But on Monday, the QIA criticized the volume of reports finally issued by Baffinland, this time comparing the cumulative effects assessment to a “three-dimensional spider’s web.”

There was also the question of how Baffinland treats IQ: this came up during the first session of Monday, when Baffinland’s vice-president for sustainability, Megan Lord-Hoyle, stood up to apologize for the way in which a Baffinland contractor had shared traditional knowledge.

She was referring to concerns raised in a June 13 letter from the mayor of Pond Inlet, Joshua Katsak, to the NIRB, which said research by Baffinland on caribou, as presented in an article, was an “abuse of IQ” and misrepresented Inuit.

The article was published in ArcNorth News, an online geographic information or GIS system journal, whose title was “Will Baffinland’s mine impact caribou habitat?”

Lord-Hoyle told the hearings that the article would be removed immediately.

While the article wasn’t written by Baffinland, it was the work of a consultant for the mining company and remained, until today, available online.

It’s still posted on the NIRB website, but this time, along with the mayor’s letter and a lengthy response from the Hamlet of Pond inlet’s technical advisor Frank Tester.

“I think this is a problem,” Tester told Baffinland.

Baffinland reports can’t be trusted due to their bias on what kind of IQ they gather and include, said the Igloolik working group representative and hamlet councillor Peter Ivalu in his comments.

In response, after saying “we do not want there to be a trust issue,” Lord-Hoyle proposed the creation of an Inuit advisory council.

During the discussion of cumulative effects, criticism of the railway’s impact on caribou came up from the Government of Nunavut as well as from Pond Inlet’s hunters and trappers association: the HTA’s Eric Ootoova compared the mine’s existing tote road to a “Trump wall,” because it already blocks caribou on their migrations.

But Baffinland said adaptation is possible, and, to that end, it has called a workshop next month to select places where crossings will be put in for caribou and Inuit. They’ll use sandbags and other physical objects to help participants visualize what the railway and sidings will look like.

As for the impact of shipping on marine mammals, a focus of the meeting again on Tuesday morning, this also sparked a dispute on Monday.

The traffic could sometimes see the possible passage of four ships and an icebreaker at one time, according to Baffinland’s latest information.

Marine biologist Kristin Westdal of Oceans North, a non-profit conservation organization, noted that Baffinland was having a tough time answering a fundamental question: what are the cumulative impacts of repeated disturbances on narwhal?

This week’s meeting is the latest step in Baffinland’s efforts to gain regulatory approval to expand its Mary River operation.

The NIRB has decided to split its upcoming final public hearing between Pond Inlet, from Sept. 23 to Sept. 27, and Iqaluit from Sept. 30 to Oct. 4. The NIRB will issue its recommendation on the project after the Oct. 21 federal election.

In October 2014, Baffinland proposed the first version of its phase-two expansion scheme now under scrutiny at the technical meeting.

The company then changed their plan to propose replacing its tote road to Milne Inlet with a railway.

Baffinland’s revamped expansion plan is now based on building a 110-kilometre railway in north Baffin, which will double its ore production to 12 million tonnes a year, and extend the length of its shipping season from July 1 to Nov. 15.

That expansion would require more infrastructure at the Mary River mine site and at the port for the roughly 175 round-trip shipments by vessels that would dock at Milne Inlet.

The price tag for this expansion is about $900 million.

Baffinland’s expansion plans also includes another railway-port proposal that the company received permission to build with its 2012 project certificate.

This would eventually see a 150-km railway running south to a proposed port at Steensby Inlet would carry an additional 18 million tonnes a year to market on ships sailing through Foxe Basin and Davis Strait.

An earlier version of this story included out-of-date information about the dates of the NIRB’s final hearing on Baffinland’s expansion plans. The NIRB now plans to split this hearing between Pond Inlet from Sept. 23 to Sept. 27 and Iqaluit from Sept. 30 to Oct. 4. The NIRB will issue its recommendation on the project after the Oct. 21 federal election.