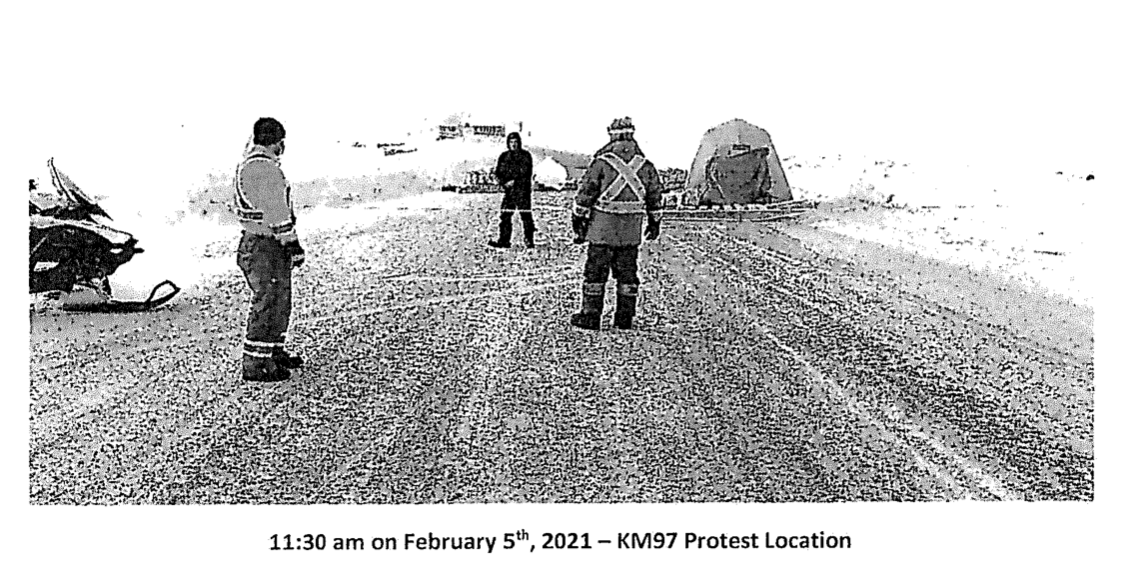 Inuit protesters from Arctic Bay and Pond Inlet set up blockades at Baffinland Iron Mine Corp.’s Mary River mine on Thursday, Feb. 4. Baffinland included this image to support its application for a court injunction to end the blockade of the airstrip. (Photo from Nunavut Court of Justice)

A judge has ordered protesters blockading the airstrip and road to Baffinland’s Mary River iron mine to allow employees to leave.

Justice Susan Cooper made the order Wednesday morning before a mostly full Nunavut Court of Justice courtroom in Iqaluit.

“The order is to facilitate the transportation of the employees who are currently on the site so that they can leave and go home,” she said.

Baffinland lawyer Brad Armstrong submitted an application for an injunction on Tuesday after the company issued a news release stating it was considering all options to end the airstrip blockade, which continued for its seventh day on Wednesday.

On Feb. 4, a group of seven hunters from Arctic Bay and Pond Inlet arrived at the mine site and shut down the airstrip and road that leads to Milne Inlet, in protest of a proposed expansion of the mine that would double its output.

The company has said there are more than 700 employees at the mine site and the blockades are preventing supplies from coming in and employees from leaving.

Lori Idlout, a lawyer representing the protesters, says that they have not been preventing medevacs from arriving or employees from departing.

“We don’t think that an order is necessary,” she said.

She also added the protesters are willing to allow flights in and out one day per week as well as maintenance of the airfield.

The parties will return to court on Saturday at 9:30 a.m. in Iqaluit.