“Inuit have to be part of the process. It affects every part of Inuit lives,” says NTI president 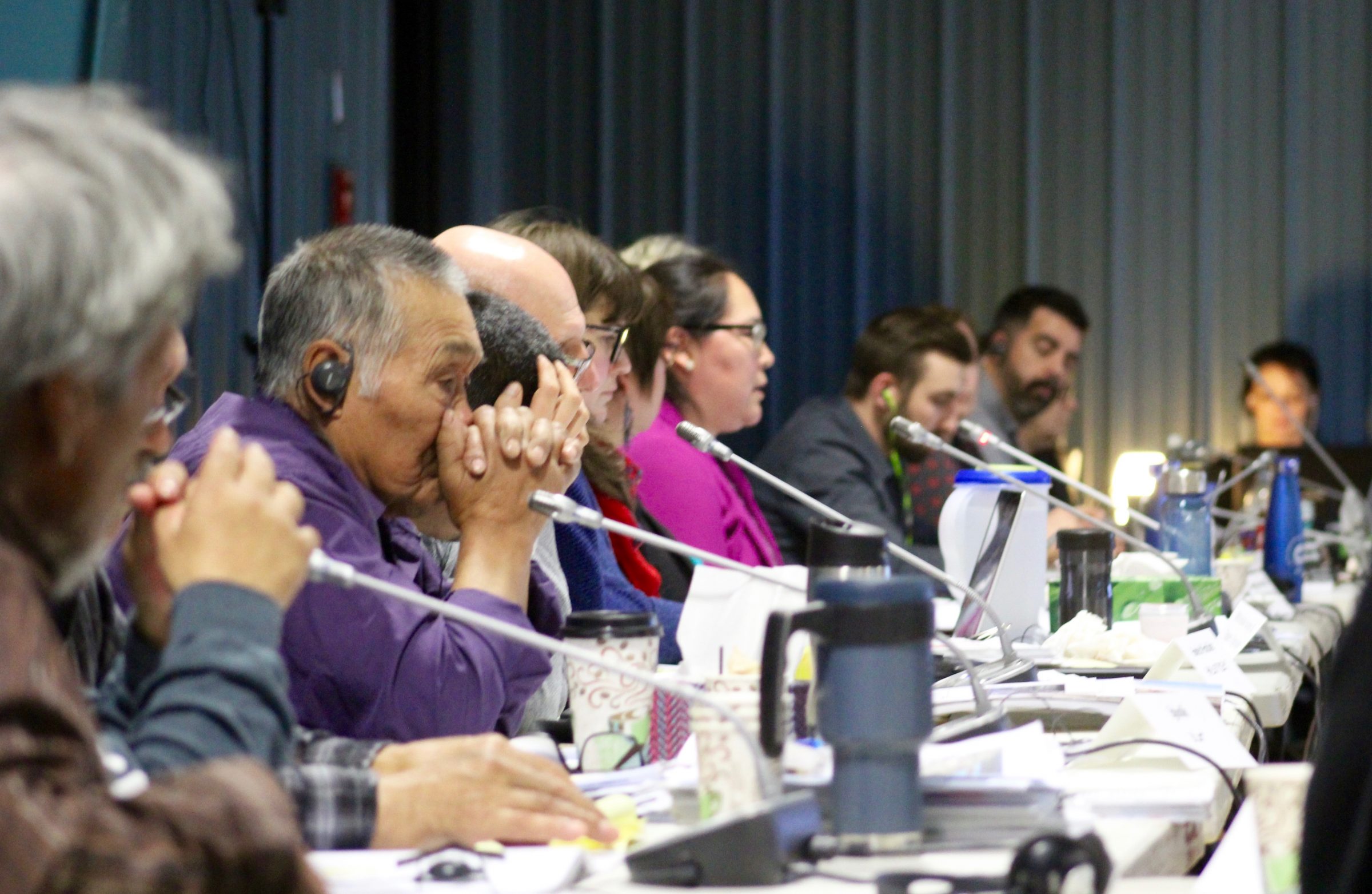 By Emma Tranter and Elaine Anselmi

The Nunavut Impact Review Board hearing on Baffinland Iron Mines Corp.’s proposed expansion of its Mary River mine has been abruptly adjourned, with two days of meetings in Pond Inlet now cancelled.

On Wednesday, Nov. 6, Nunavut Tunngavik Inc. president Aluki Kotierk brought forward a motion to immediately suspend the final public hearing and defer its continuation for eight months to one year.

Whispers could be heard throughout the room as intervenors turned to their colleagues. Members of the audience turned their heads, looking for Baffinland’s reaction to what was unfolding.

Baffinland officials sat stone-faced, sometimes crossing their arms and looking down at the table as Kotierk spelled out the motion.

“We are concerned that we are going to conclude the public hearing when all things haven’t been finished. The people have to be consulted and have a meaningful discussion. Everyone around the table would like to understand everything that is being presented and how it’s going to affect NTI and organizations,” Kotierk said to a room packed with intervenors and the public.

“Inuit have to be part of the process. It affects every part of Inuit lives,” she said.

The motion was brought forward on the fifth day of the hearing in Iqaluit, an hour before it was scheduled to end.

The NIRB’s original agenda had the hearing continuing to Pond Inlet for community roundtable sessions on Nov. 8 and 9.

The NIRB ruled in favour of NTI’s motion, suspending the hearing and cancelling the Pond Inlet sessions.

All week, Baffinland representatives had gone back and forth with intervenors on their planned construction of a rail line north from the Mary River site to its Milne Inlet port.

The railway, and additional port infrastructure, would make it possible for the company to ramp up their production from the current 6 million tonnes of iron ore per year to 12 million tonnes.

But one sticking point throughout the week was Baffinland’s request for an amendment to its project certificate that would remove its production cap and replace it with a limit tied to transportation of its product, of 20 train trips per day and 176 ship transits per year.

The motion to adjourn was supported by all intervenors, many of whom shared similar concerns about uncertainties over the project.

P.J. Akeeagok, the Qikiqtani Inuit Association’s president, told Nunatsiaq News he had faith in the NIRB’s process to ensure “Inuit would have opportunities to ask good questions in terms of what’s important to them” and “allow community members to really voice their concerns that have been persistent.”

Akeeagok said the motion was not pre-conceived, but came together on the final day of the hearing.

“I think it just boiled down to there’s just too many outstanding questions that haven’t been resolved. From my perspective, if you’re going to make a decision for your future, you’ve got to ensure you have all the information available to make that sound decision. It just wasn’t quite there.”

Representatives from North Baffin communities all agreed with the motion.

“Further information and assessment is needed,” said Amanda Hanson Main, advisor to the Mittimatalik Hunters and Trappers Organization. She said the project “has a serious potential to impact the resources we depend on and maintain our sense of purpose and belonging in the world.”

Some groups around the table said they do not oppose the Mary River project in general, and they want Baffinland to continue operating in Nunavut, but they have too many questions and concerns with the proposed expansion.

“The information we’ve been given is watered down and it’s not enough,” said Peter Ivalu, representing the Hamlet of Igloolik. “All of the information given should be translated. You have to make sure everything is transparent.” 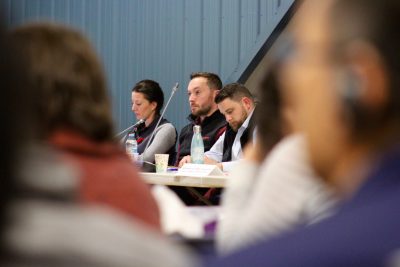 The Government of Nunavut agreed with the motion, offering a measured response, saying there has been disagreement between intervenors and the proponent that’s created a standstill.

The Government of Canada also supported the motion, but said it was up to the NIRB to determine the appropriate length of the delay.

“All parties to this hearing came to the hearing ready to proceed on November 2 when it started,” said Brad Armstrong, legal counsel for Baffinland.

“Not one party indicated to you that they were not ready to proceed on that date. There has been nothing in the course of this proceeding that has made anybody less ready than they were when they got here.”

Megan Lord-Hoyle, vice-president of sustainable development for Baffinland, said delaying the hearing would cause “immediate ramifications” to the business.

“But we will do everything possible to survive and protect the employment of 3,000 Canadians, 476 of which are Inuit. We need to know that Inuit will work with us. We need some time to determine the ramifications on the business,” Lord-Hoyle said.

While the QIA has said that it cannot support phase two, Akeeagok said its work to ensure Inuit are informed about the project and that the project is sustainable will not end.

“We’re not opposed to Mary River at all. We are partners. We own the Inuit-owned lands that they’re on. We support Inuit employment,” he said.

“We invested a lot of our resources and time to ensure the project is sustainable for the long run. So with that mindset, we always have to find the balance. And the balance wasn’t just quite there yet.”

Akeeagok said the communities’ uncertainty around the railway’s impacts on caribou were particularly important to him.

“As an Inuk, those are things that tie right to your culture. And that was very evident with the elders here that they’re not just thinking about themselves, it’s the future generation. That’s what really hits home to me. Any decision I make isn’t about just this moment, it’s the next generation. Did I leave them something better as a foundation that is much better than what I have now? I think that’s the basis of any decision, no matter what culture you’re from,” he said.