“There is no date for remobilization at this time” 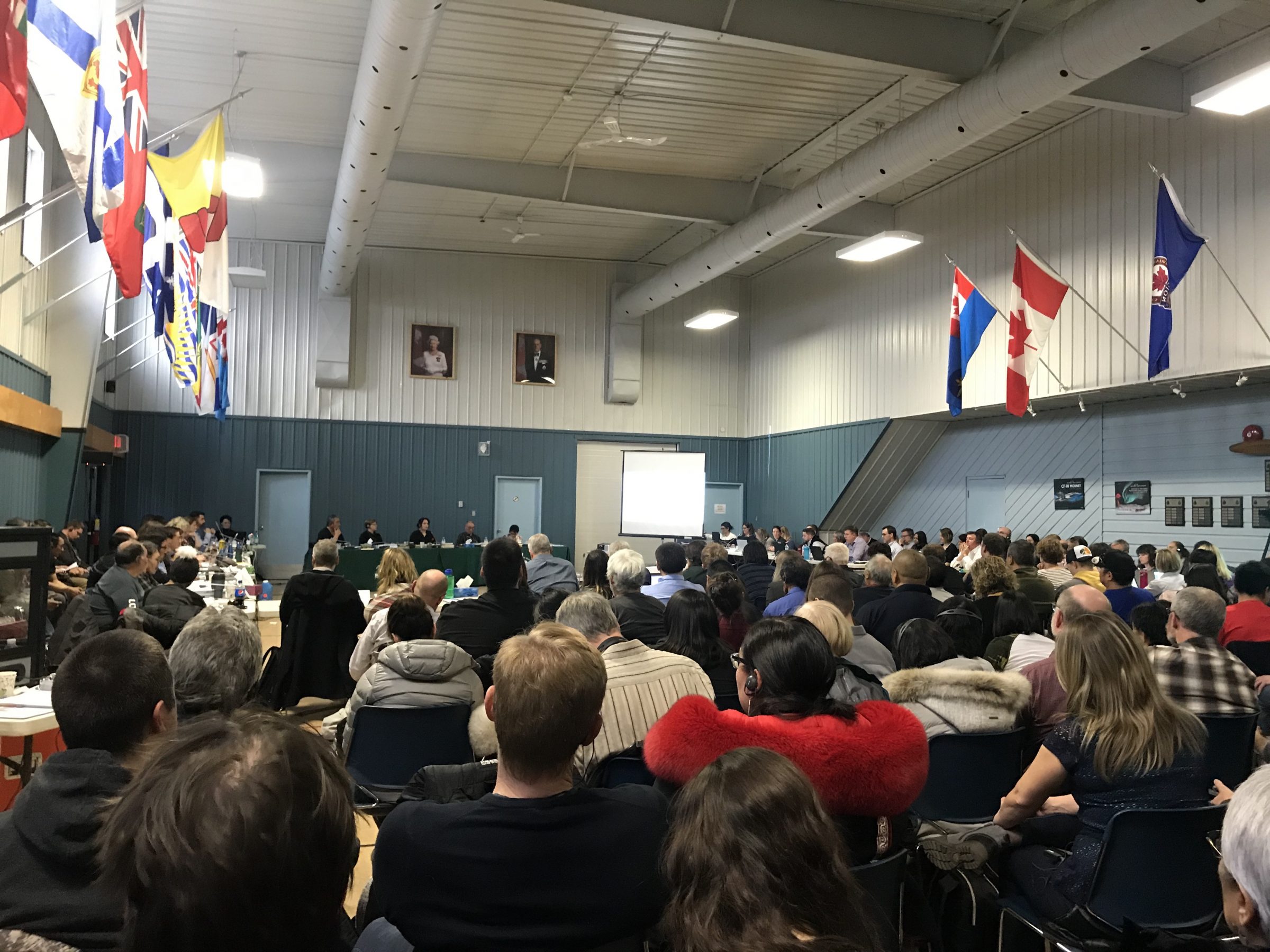 Baffinland Iron Mines Corp. says it has laid off 586 contracted employees working at its Mary River mine.

Of those contractors, 96 are Inuit and 490 are non-Inuit, the company said in an email to Nunatsiaq News.

The layoffs come shortly after the Nunavut Impact Review Board’s decision on Nov. 6 to abruptly adjourn its public hearing on the company’s expansion plans.

“Due to the uncertainty of Phase 2 permit approvals, work associated with the 2019 Work Plan has been demobilized,” Salima Virani, a communications specialist for Baffinland, said in the email.

On Nov. 6, Nunavut Tunngavik Inc. President Aluki Kotierk brought forward a motion to immediately suspend the final public hearing and defer its continuation for eight months to one year.

Throughout the hearing, Baffinland representatives went back and forth with intervenors on their planned construction of a 110-kilometre rail line north from the Mary River site to its Milne Inlet port.

The railway, and additional port infrastructure, would make it possible for the company to ramp up its production from the current 6 million tonnes of iron ore per year to 12 million tonnes.

The motion to adjourn was supported by all intervenors.

In its email, Baffinland said it is committed to the NIRB process and supports the recent delay of the hearing.

“It allows parties more time to formulate a coordinated response and continue to work towards the resolution of any outstanding issues” Virani wrote.

Although the company supports the delay, it has caused a major setback, halting all activity on its 2019 work plan.

“As such, certain contractors working on site have been notified that these works have been suspended. This is one month earlier than was previously planned for the Christmas break.”

“Activities outlined in this 2019 Work Plan represent planned works, improvements, infrastructure and equipment required to execute the currently approved phase of the project. Additionally, equipment and materials required for the Phase 2 expansion will be mobilized to the Mary River Project in 2018 in anticipation of the amended permits. For clarity, no earthworks or infrastructure construction associated with the Phase 2 expansion have been included in this 2019 Work Plan,” Baffinland’s 2019 work plan states.

A sealift of railway materials was transported by Baffinland Iron Mines Corp. to its Mary River iron mine site earlier this summer.

In an email to Nunatsiaq News, the Qikiqtani Inuit Association said it is very concerned about Inuit job losses at the mine.

“QIA is very concerned about Inuit employment and contracts at the Mary River Project. We know that every single job matters. Our team has reached out to Baffinland to get more information about possible layoffs or termination of contracts with Inuit firms. We are awaiting the company’s response,” QIA said.

Joshua Arreak, manager of Pond Inlet’s Mittimatalik hunters and trappers organization, said he had not heard about layoffs at the mine.

“I have not been in contact with Baffinland. We have not heard anything to date,” Arreak said.

Terry Dobbin, general manager of the NWT-Nunavut Chamber of Mines, told Nunatsiaq News he hopes the project can continue to move forward.

“Our members are watching this unfold with concern and hoping there is a resolution to the issue as the project is very important to Nunavut. Baffinland is working hard with all parties to find an agreeable resolution to any outstanding issues,” Dobbin said.

The company said there is currently no plan for when construction might resume.

“There is no date for remobilization at this time. The demobilizing effort is due to the uncertainty of Phase 2,” Virani said.

“We will keep working hard with all parties to find an agreeable path forward and remain committed to this. Baffinland will also continue to make Inuit recruitment and retention a priority, in accordance with the Inuit Impact and Benefits Agreement.”