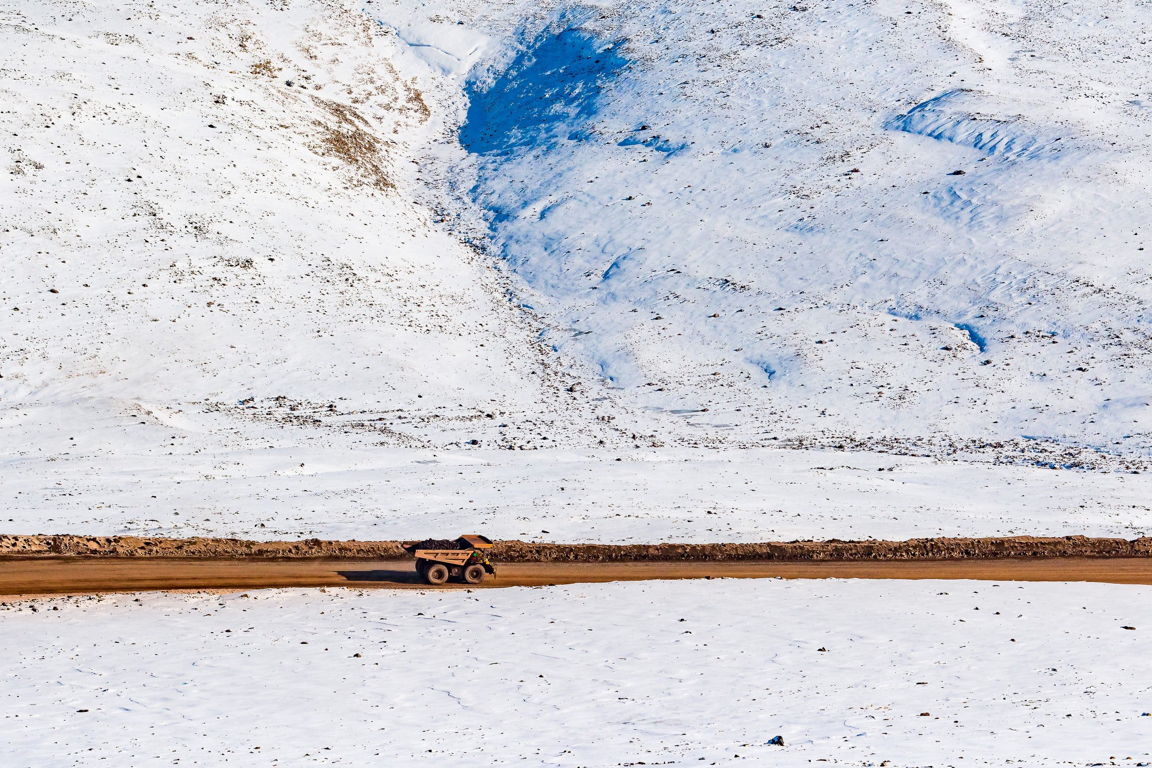 A haul truck carries iron ore along a road between Mary River and Milne Inlet on north Baffin Island. Baffinland Iron Mines Corp. appears to be considering a further expansion that would see the production of up to 18 million tonnes of ore per year. (Baffinland handout)

Baffinland Iron Mines Corp. is likely planning a further expansion of its Mary River iron mine that would see iron ore shipments through its Milne Inlet port increase to 18 million tonnes a year.

That information is contained in a credit report on Baffinland, prepared by Moody’s Investors Service, dated June 2020 and obtained by Nunatsiaq News.

“Baffinland plans to expand the Mary River mine to a capacity of 18 Mtpa [18 million metric tons, or tonnes],” says the report, which repeatedly refers to a “Phase 3” expansion.

That’s a larger production figure than that provided to stakeholders and regulators by Baffinland in its current “Phase 2” proposal, which the Nunavut Impact Review Board is still assessing, that is, 12 million tonnes a year.

When Nunatsiaq News asked if the company does indeed plan a further production expansion, Baffinland did not explicitly deny or confirm the Moody’s report.

But the company said that for now, it wants the NIRB to assess its expansion plans only on the basis of its 12-millon-tonne proposal—but left the door open for more expansion activities in the future.

“Today, we are seeking approval for our proposed Phase 2 expansion and ask NIRB and all Intervenors to hold us accountable to the current project being evaluated,” Heather Smiles, Baffinland’s manager of stakeholder relations, wrote in an emailed statement.

“Any expansion activities not covered by Phase 2 will follow regulatory requirements and engagement expectations.”

Last year, a similar suggestion emerged from a leaked Baffinland document, intended for potential investors, that also contained information suggesting the company wants an expansion of up to 18 million tonnes a year along the northbound Milne Inlet railway.

That prompted the Oceans North conservation group to put a motion before the NIRB, at its public hearing in October 2019, alleging Baffinland failed to disclose the full scale and impact of its expansion project.

Baffinland denied those allegations, and said it wants the NIRB to evaluate its proposal only on the basis of 12 million tonnes per year. NIRB dismissed the motion.

The report by Moody’s barely mentions Baffinland’s plan for its southbound Steensby Inlet rail and port system, which is fully permitted.

Under that plan, which the NIRB approved in 2012, Baffinland has regulatory permission to build a 143-kilometre railway to Steensby Inlet and ship up to 18 million tonnes per year through Foxe Basin and Hudson Strait.

The company says, however, that the southbound route is still on the table.

“We remain committed to the construction and operation of the Steensby project as soon as feasible. In the meantime, we will continue to pursue the responsible development and expansion of the northbound Milne Inlet route,” Smiles said in the Baffinland statement.

Moody’s Investors Service examines companies in detail and assigns credit ratings to them based on the consideration of multiple factors.

Potential investors then use that credit rating to decide if it’s safe to lend money to the company and to figure out what interest rate they should charge.

The highest long-term rating a company can receive is “Aaa.” For Baffinland, Moody’s assigned a much lower rating of “Caa1,” in the “not prime” category.

Baffinland’s largest shareholder is Nunavut Iron Ore Inc., which is controlled by a Texas-based private equity firm called the Energy & Minerals Group, which owns 72 per cent of the company. The European steel giant ArcelorMittal owns the other 28 per cent.

In their analysis of Baffinland, Moody’s describes the mine as a “small-scale” operation and, at its current production level of six million tonnes per year, one of the smallest mines the company has looked at.

Moody’s listed multiple risk factors for the expansion of Mary River, most of which are well known to the public:

• Its only source of revenue is a single commodity, iron ore, which is subject to volatile pricing, from only one mine, located in a remote location, producing only six million tonnes per year right now.

• The risk of regulatory delays, such as the length of time it took for the Nunavut Planning Commission to issue a land-use conformity decision.

• A short shipping season that starts each year in late May or early June and ends in late September or early October each year.

“With the company relying on the single mine for all cash flows, disruptions in production from geological difficulties or external factors such as weather could have a significant negative impact on the company’s financial performance,” Moody’s said.

The report also said the company needs a capital budget of between $1.2 billion and $1.3 billion to complete its expansion.

That means in the short term, the company would likely have to wait years before getting a payback on that investment.

“With this large spend program, Baffinland will have significant negative free cash flow over the next few years,” the report said.

Expansion would cut costs in half

On the other hand, after the expansion was completed, the company’s production costs would be cut in half.

Right now, at about six million tonnes per year, it costs the company between $38 and $40 to produce a single tonne of iron ore.

But after the expansion, that cost would drop to about $20 per tonne—and the company would become globally competitive, Moody’s said.

On the upside, Moody’s lists the following advantages:

• Its location in Nunavut, described as a “politically stable” region.

Moody’s also said that, prior to the pandemic, Baffinland’s Inuit employment levels were rising.

As of the first quarter of 2020—Jan. 1 to March 31—355 Inuit worked for Baffinland or its direct contractors. Of those individuals, 208 worked directly for Baffinland.

That’s up from the same period in 2019, when a total of 314 Inuit employees worked at Baffinland, including 169 who worked directly for the company.

But after the COVID-19 pandemic started, the company demobilized about 200 employees and contractors, representing all of its Inuit workforce and high-risk employees.

Those measures cost the company about $1.6 million, but that figure does not reflect the impact of lower production caused by COVID-19.

Overall, Mary River produced 5.7 million tonnes of ore and received revenues of $507 million in 2019, Moody’s said. But the agency did not disclose whether the Mary River mine lost or made money that year.

An earlier version of this story incorrectly named and identified the job title of Heather Smiles, Baffinland’s manager of stakeholder relations.