Baffinland proposes production limits based on impact, not tonnage 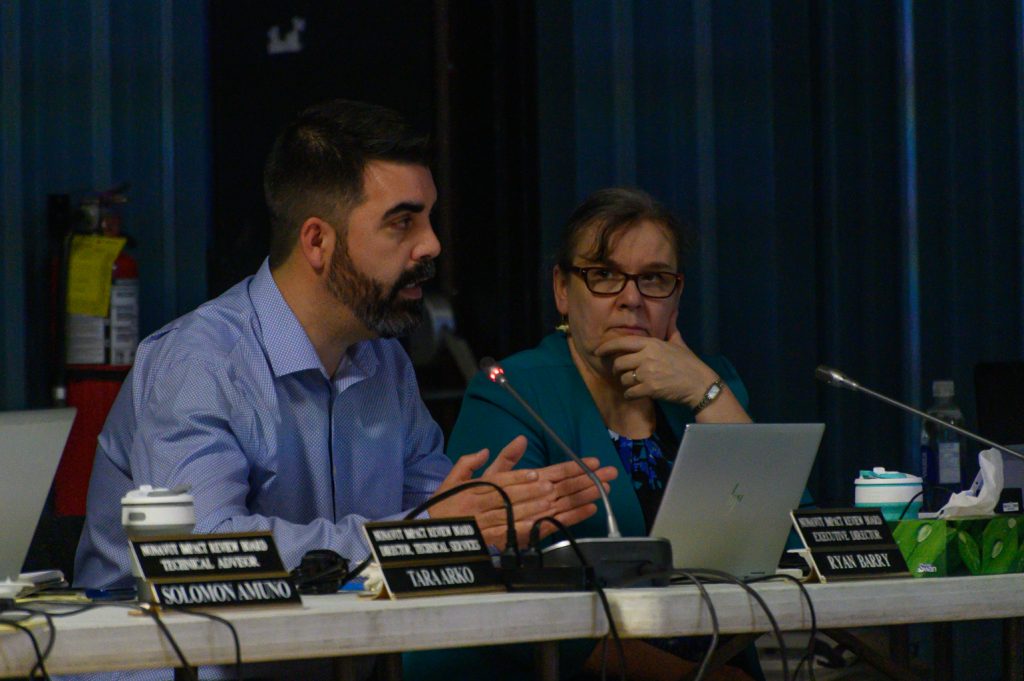 Ryan Barry, executive director of the Nunavut Impact Review Board, questions representatives of Baffinland Iron Mines Corp., following their presentation on Sunday, Nov. 3, the second day of hearings for phase 2 of the Mary River project. (Photo by Dustin Patar)

Baffinland Iron Mines Corp. wants its production limits at its Mary River iron mine set not by tonnage, but by its environmental impacts.

At the second day of the Nunavut Impact Review Board’s final public hearing on the development of phase two of the Mary River project, on Sunday, Nov. 3, Megan Lord-Hoyle, the vice-president of sustainable development for Baffinland, said this would provide the operational flexibility the company requires.

This was proposed for inclusion in the terms and conditions of Baffinland’s amended project certificate, which has not yet been approved.

Baffinland’s rationale is that by tying the limitation to the environmental impacts of rail and ship transits, the company could operate “at a certain level without automatically requiring a project certificate reconsideration process.”

In basing production limits on the number of ship and train transits, Ryan Barry, the executive director of the NIRB, asked whether Baffinland proposes to scale up those vessels, allowing for more capacity.

Barry said it would be important for the board to understand the range and type of vessels that Baffinland is considering, to fully understand the impact on the future of the project.

Lord-Hoyle said the scalability would still be constrained by other aspects of the environmental assessment.

For its original “early revenue” project, which involved trucking ore from Mary River to Milne Inlet, Baffinland was allowed a production limit of 3.5 million tonnes per year, with a 20 per cent allowance for flexibility.

That means they were actually allowed a total of 4.2 million tonnes per year.

For phase two, rather than flexibility based on tonnage, Baffinland wants its limit tied to the restrictions set around its environmental impact: 176 ships at its Milne Inlet port, and 20 rail trips per day (should the railway be approved and built).

Baffinland has come under fire recently for pitches made to investors that appear to suggest they plan the production of 18 million tonnes a year, rather than 12 million tonnes.

The proposed increase in production from six million tonnes per year of iron ore to 12 million tonnes, to be shipped by rail from Mary River to Milne Inlet, has been a central focus of the environmental assessment of the project’s phase two thus far.

While an assessment of the market for polar-class ships has been done internally for Baffinland, it has not been submitted to the regulator as part of these hearings.