Once rescheduled, meeting will be conducted via teleconference and written submissions 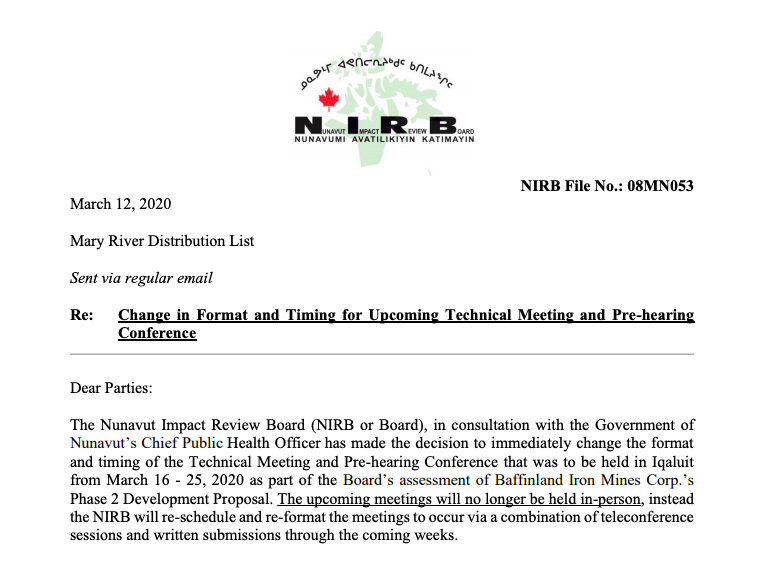 With the spread of the novel coronavirus cancelling public gatherings across Canada, the Nunavut Impact Review Board has announced that it will delay the technical meeting and pre-hearing conference on Baffinland’s plans to expand its Mary River mine, which were set to begin in Iqaluit on March 16. The meetings could be rescheduled soon, but rather than being held in person, they will be conducted through videoconferencing and written submissions. (Screenshot)

The new coronavirus has derailed plans to hold a technical meeting in Iqaluit next week on Baffinland Iron Mines Corp.’s plans to expand its Mary River mine.

The meeting and pre-hearing conference, scheduled to begin on Monday, March 16, and run through March 25, could be rescheduled early next week, according to a letter from the Nunavut Impact Review Board, dated Thursday, March 12.

But these meetings will no longer be held in person, the letter states. Instead, they will be conducted through teleconferencing and written submissions.

“In consultation with the Chief Public Health Officer, the Board has determined that this change in meeting format and timing is the most responsible precautionary measure to address concerns around the spread of COVID-19 (Coronavirus),” said the letter, signed by Ryan Barry, executive director of the review board.

In its phase-two proposal, Baffinland proposes increasing Mary River’s production from six million to 12 million tonnes of ore per year. The expanded mine would be served by a 110-kilometre railway from Mary River to Milne Inlet and up to 176 ships’ voyages each season.

The technical meeting and pre-hearing conference are intended to go over any outstanding issues with the project’s final environmental impact statement addendum and other project documents, as seen by the parties to the hearing.

Those parties include affected hamlets and hunters and trappers organizations, Inuit organizations, government departments and environmental organizations. The pre-hearing conference would confirm that all parties are ready to go forward to the public hearing and determine its format.

This follows the previous public hearing in November, when outstanding questions about the project led the affected parties to ultimately adjourn.

“The NIRB appreciates the understanding and support of all parties for this necessary change in scheduling. The Board remains committed to advancing the assessment of the Phase 2 Development Proposal in the most reasonable means possible,” states the letter.

Already, the Nunavut Mining Symposium, which was to be held in Iqaluit in early April, has been cancelled due to the risk of the virus that has now been deemed a global pandemic.

This also follows the revelation that an attendee at the 26,000-person Prospectors and Developers Association of Canada convention in Toronto in early March tested positive for COVID-19.

Seven employees from Nunavut’s Department of Economic Development and Transportation attended that conference, according to the Department of Health.

But Dr. Michael Patterson, Nunavut’s chief public health officer, said as of March 11 there were no confirmed cases of COVID-19 in the territory.

According to the Department of Health, the best defence against COVID-19 is proper hygiene and managing your symptoms. It recommends that you do the following:

• Stay home if you are sick.
• Encourage those you know are sick to stay home.
• Change how you greet people to avoid physical contact such as handshakes,
hugging or kissing.
• Wash your hands regularly.
• Cough and sneeze into your sleeve.
• Clean and disinfect frequently touched surfaces such as toys, phones, toilets,
electronics, bedside tables, television remotes and door handles.

This story was updated to say that the meeting will be conducted through written submissions and teleconferencing, and not video-conferencing.