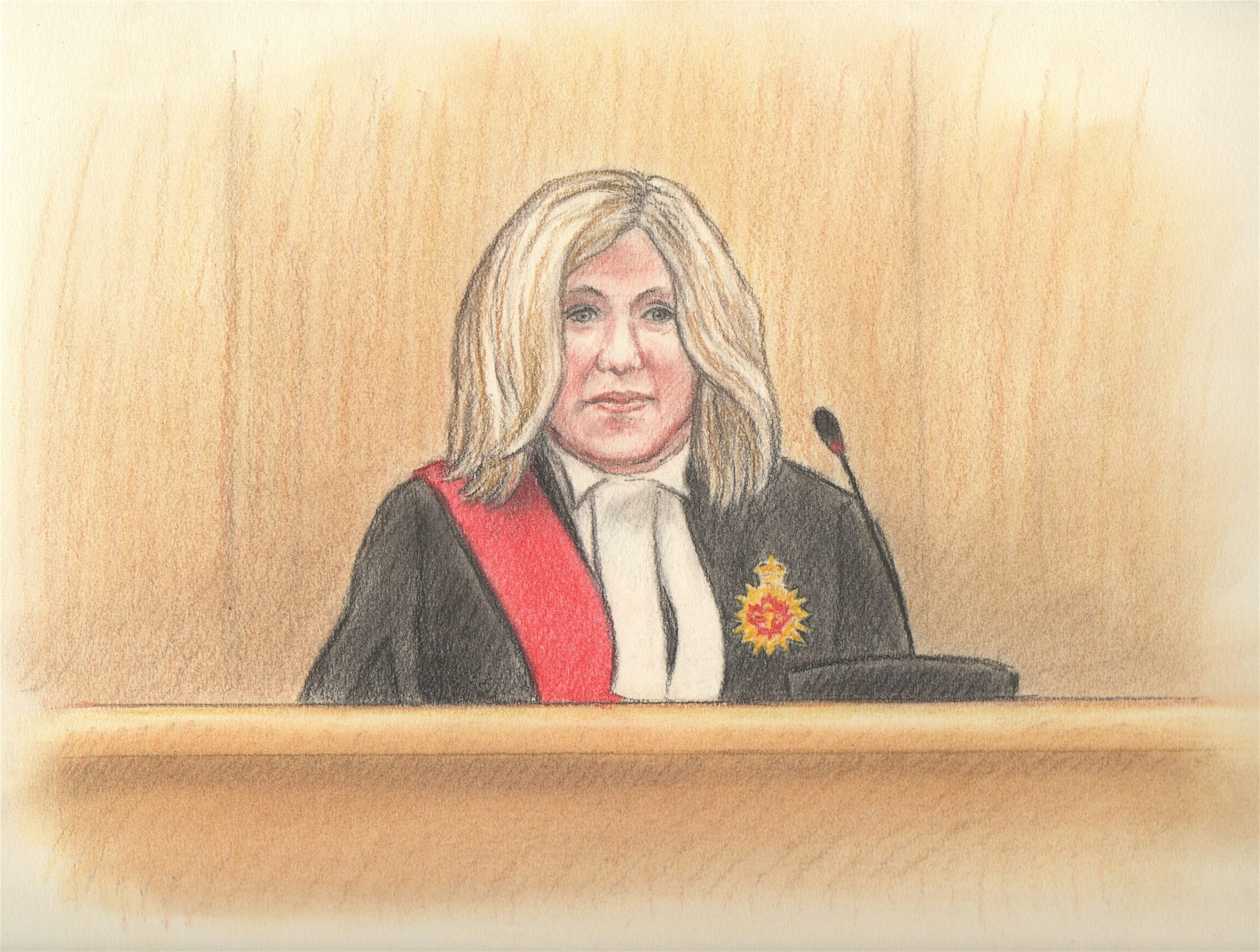 Judge Anne London-Weinstein, pictured, is presiding over the trial of Tyler Hikoalok, charged with first-degree murder in the 2018 death of Elisabeth Salm in Ottawa. The trial continued Tuesday with testimony from Salm’s husband, Lyle Young. (Courtroom sketch by Lauren Foster-MacLeod)

When Elisabeth Salm said goodbye to her husband, Lyle Young, before riding her bike away from their home in Ottawa’s New Edinburgh neighbourhood, it was the last time Young spoke to his wife of 28 years, he testified on the second day of the trial of the man accused of killing her.

The trial of a Cambridge Bay man facing a first-degree murder charge in Ottawa continued Tuesday with the Crown’s opening statements and testimony from the victim’s husband.

Tyler Hikoalok, 22, is charged in the death of Elisabeth Salm, a 59-year-old volunteer librarian at the Christian Science Reading Room at 141 Laurier Ave. West in Ottawa.

Security camera footage played in the courtroom showed Salm arriving outside the front entrance to the reading room at 8:56 a.m. on May 24, 2018, locking her bike to a pole on the sidewalk and walking inside the centre.

She had just arrived at the reading room for her usual 9 a.m. to 1 p.m. shift.

A few hours later, around 12:54 p.m., Salm was found by her coworker Janet Dudley in the back room of the centre, barely clinging to life.

In her opening statement, Crown lawyer Lisa Miles said Salm had been severely beaten and had multiple injuries to her face and body. She was discovered lying on her back and was naked from the waist down, with evidence that she had been sexually assaulted.

After being taken to intensive care, Salm died in hospital the following afternoon at 2:41 p.m.

On Tuesday, Young, 64, testified he saw Salm that morning before she left for work on her bicycle.

The two had met decades before through the Christian Science Church in Ottawa. Salm was a person who was “incredibly community minded” and was very active in her church, Young said.

“She felt a great sense of unity and purpose” through her work with the church, often staying later at the reading room past her shift.

She was a choir singer and a long-time Sunday school teacher. She also cared deeply about the environment and was an avid cyclist, Young said.

The trial is being presided over by Judge Anne London-Weinstein and is scheduled to last for five weeks.