Esuma providing up to $5,000 for School Perseverance Days events 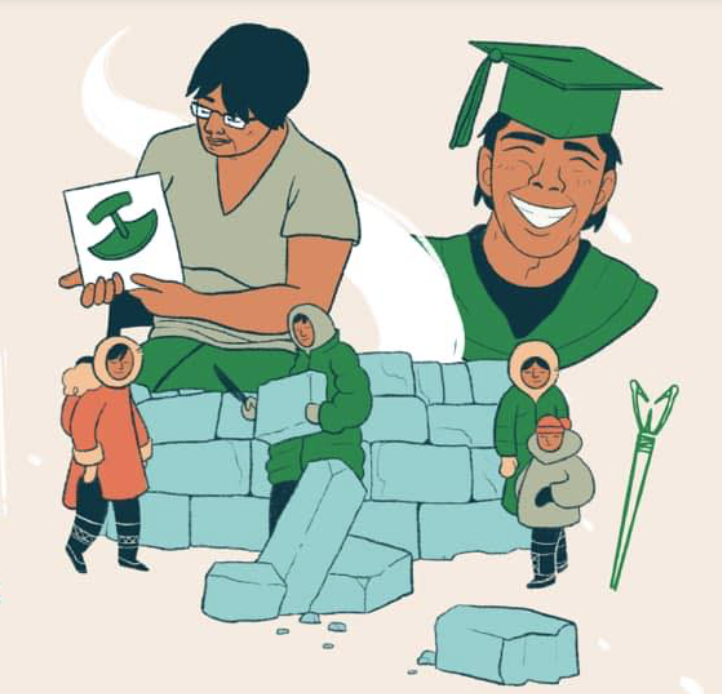 This year’s School Perseverance Days campaign theme is “Perseverance: It’s in our nature” which refers to the determination and resilience of Inuit. (Image courtesy of Esuma)

A campaign in Nunavik is putting the spotlight on Inuit youth to help promote resilience in education and in life.

The School Perseverance Days campaign encourages Nunavimmiut to share personal stories of perseverance as a way to inspire students in Nunavik to stay the course, said Stephanie Jacques, information officer with the Kativik Regional Government.

“The idea is to bring awareness, make some noise and create a bit of a buzz about enforcing the value of perseverance in school and graduation,” Jacques said. “It’s to give Nunavimmiut a platform to express how they persevere, why they persevere and transmit these types of messages on Facebook or however we they want and share this.”

The campaign in Nunavik is spearheaded by Esuma, which roughly translates into “thinking” in Inuktitut. The group, which aims to support educational success, was founded in 2014 by several regional organizations including the Kativik School Board, Makivik Corp. and broadcaster Taqramiut Nipingat Inc., among others.

In 2018, a special report from Nunavik’s school board Kativik Ilisarniliriniq showed that high school graduation rates in Nunavik were around 25 per cent, compared with 77 per cent elsewhere in the province.

The annual School Perseverance Days campaign, now in its sixth year, actually runs through all of Quebec, but Jacques said campaign materials sent from Montreal aren’t always inclusive of the unique experiences of Nunavimmiut youth.

For example, the internet is often not high-speed in Nunavik, making online activities a challenge, and sending items by mail often takes longer. Additionally, visual materials aren’t always representative of the Inuit population.

Instead, Esuma is encouraging participants to organize events about perseverance that work for their own realities, Jacques said.

Schools or communities interested in organizing activities for the campaign can apply for up to $5,000 from Esuma. Yearly activities include “perseverance murals” in schools where students write down their dreams and ambitions, a “send a postcard” program for Nunavimmiut to write messages of encouragement to youth and various social media challenges.

This year, Nunavik’s Youth Employment Services has been featuring stories of students and teachers on its social media pages to “acknowledge the hard work and dedication of the featured individuals and also inspire Nunavimmiut youth to persevere,” said co-ordinator Charlene Williams.

The Ajuinnata challenge, meanwhile, is inviting people from Nunavik to post a photo or a video on social media that shows a way they persevere in life.

The campaign’s 2022 theme is “Perseverance: It’s in our nature.”

“So we basically looked at school perseverance as a way to also promote Inuit perseverance.”

Cloutier used hunting as an example. It’s a skill that takes a long time to learn, but comes with big rewards when mastered.

Cloutier said sometimes it’s a challenge to get Nunavimmiut to submit videos sharing their stories of perseverance.

“Inuit are generally very humble people, so sometimes people don’t want to come across as showing off or boasting,” she said.

“But this is really in the spirit of sharing, so that we can encourage young people to look at perseverance in the way that we did in the old days.”

This year’s School Perseverance Days campaign runs from Feb. 14 to 18.