Canada and Nunavut sign deal in milestone step to devolution

“Decision-making power rests here in our territory, by us and for us” 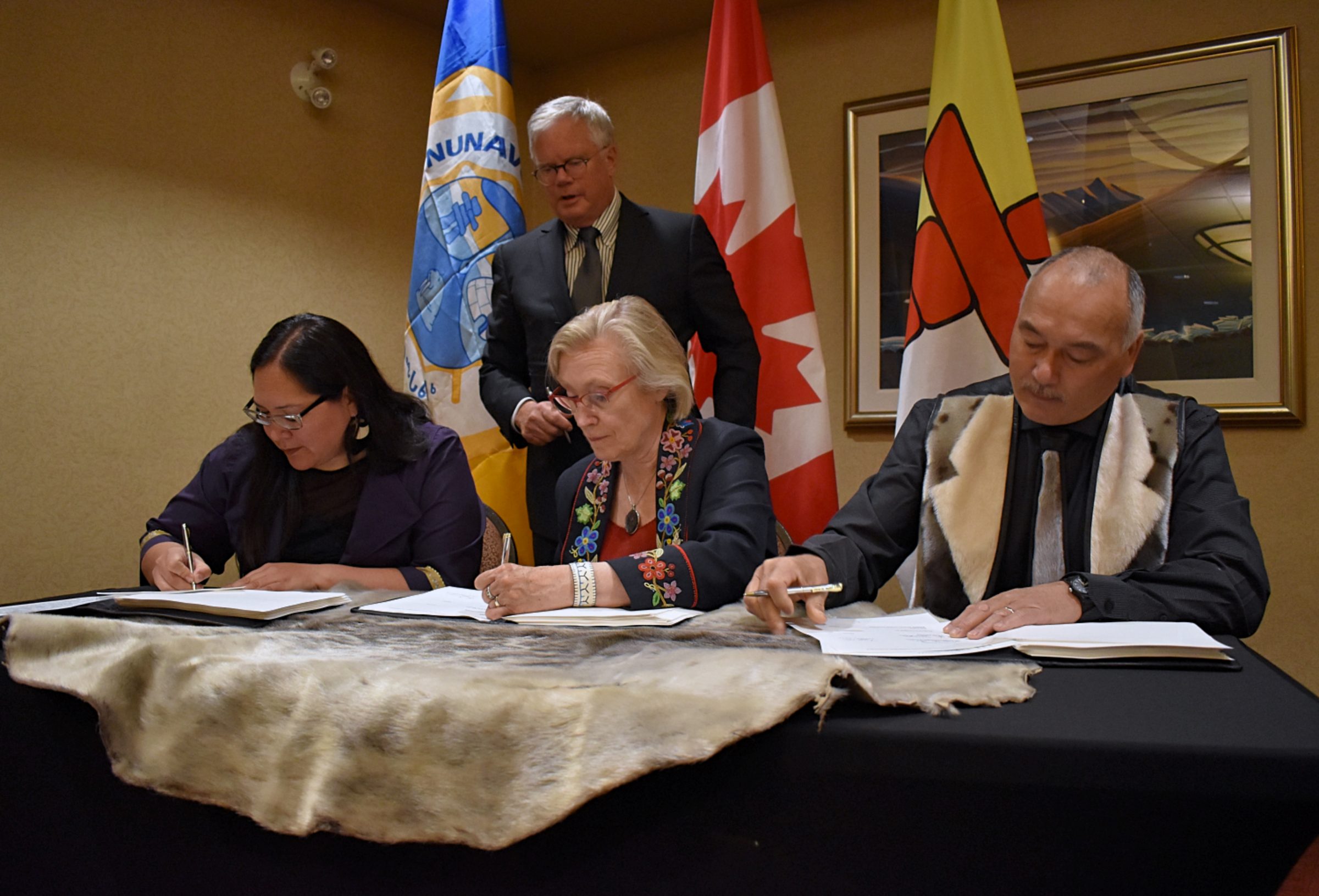 In a significant step toward Nunavut assuming control over its Crown lands and natural resources, representatives from the federal government, Nunavut Tunngavik Inc. and the territory signed an agreement in principle for a devolution agreement this morning in Iqaluit.

“We know in Nunavut’s evolution, that this is a day of celebration, for Nunavummiut and a milestone for Canada…. It has been a long day coming and a long time coming,” Bennett said.

“You are patient and persistent people … this unlocks the vision of self-determination, the vision of being able to look after your people and your lands and waters in a way that you know best,” Bennett said.

Simon Awa, Nunavut’s chief negotiator of devolution, said the agreement marks the next step to devolution.

“It marks the next step in the journey that started before the creation of our territory. This is a culmination of much work that began with formal negotiations between the Government of Canada, the Government of Nunavut and Nunavut Tunngavik Inc. in November 2014,” Awa said.

“Devolution has been agreed for the Inuit of Nunavut, ensuring that decision-making power rests here in our territory, by us and for us.”

“Today is a good day. I have to admit I wasn’t sure this day would come so quickly. It’s proof of how hard our devolution team has worked,” Savikataaq said.

“By devolving federal responsibilities, Nunavummiut will have the ability and the means to manage their decisions on how our public lands, freshwater and non-renewable resources are used and developed within Nunavut,” he added.

Kotierk said she was particularly pleased with Chapter 9 of the agreement, which will develop a post-devolution human resources and development strategy consistent with Article 23 of the Nunavut Agreement.

Article 23 of the Nunavut Agreement was meant to ensure employees at all three levels of government in Nunavut were reflective of the population of Inuit in Nunavut.

“I hope that’s another push to the government to ensure that they actually live up to and implement Article 23, which Inuit have been expecting since Nunavut was created,” she said.

The newly signed agreement, which contains 14 chapters, is not legally enforceable, a news release said.

The five-year timeline will allow for negotiation for a final agreement, training for positions within the GN, negotiation of an implementation schedule, and the drafting of legislation that will create the legal framework for the GN to take over the responsibility for Nunavut’s land, water and natural resources.

Yukon has managed its own land and natural resources since 2003, and devolution in the Northwest Territories took effect in 2014.

The full text of the agreement can be found here.