The two Arctic countries aim to increase their surveillance capabilities in the region and are actively developing and acquiring drone technology, but experts caution that operating drones in the region’s harsh environment will be no easy feat 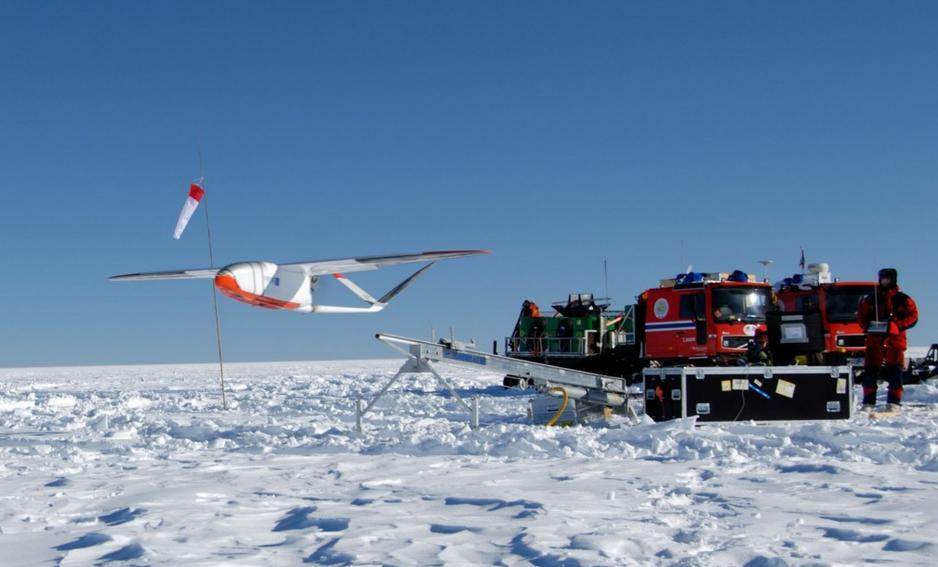 Canada is looking to purchase an unmanned aerial vehicle from Germany, while Russian defense manufacturer Kalashnikov and the country’s Foundation for Advanced Research Projects have launched projects to develop Arctic-capable drones.

“The Arctic region poses significant challenges in regards to the control of UAVs given issues pertaining to satellite control line-of-sight issues and the general lack of existing ground infrastructure,” explains Rob Huebert, associate professor at the University of Calgary and a senior research fellow with the Centre for Military and Strategic Studies. Extreme weather with high winds and low temperatures, limited and unreliable satellite communication and navigation, and continuous darkness during the winter months are significant hurdles to the operation of drones in the Arctic.

A German drone for Canada

Earlier this week Canada confirmed that it has submitted an official bid to acquire a high-altitude surveillance UAV prototype from Germany. The drone may be part of Canada’s plan to improve its surveillance capabilities in the Arctic, reports the news agency Reuters. In 2016 Transport Canada issued a tender for a UAV, commonly known as drone, with the capabilities to monitor environmental pollution, track changes in sea ice, and enhance the country’s sovereignty in the Arctic waters. “Transport Canada is considering the use of a drone to enhance the safety and security surveillance capability of its National Aerial Surveillance Program to survey ice and oil spills in the Canadian Arctic,” confirmed a department spokesperson at the time.

The country is in the midst of a five-year $133 million upgrade of its Arctic monitoring systems to enhance the military’s air, maritime, and subsurface awareness in the region. According to Canada’s Department of National Defence the existing Arctic surveillance system, which covers 75 percent of the country’s coastline, will require significant upgrades and replacements by 2025. As sea ice recedes and economic activity increases throughout the Arctic, coast guards and defense ministries of the Arctic coastal states face new responsibilities and challenges.

Russia pushing ahead with new drones
Meanwhile, Russia is itself developing a number of different unmanned aerial vehicles for deployment in the Arctic. At the end of 2018 the country’s defense manufacturer Kalashnikov revealed two newly developed Arctic patrol drones. The autonomous unmanned aerial vessels will be used to patrol the waters along the Northern Sea Route, especially in proximity to oil and gas installations. The drones are based on the Zala Aero drones and are modified to operate in extremely low temperatures and high wind conditions.

In addition, military technology specialists at Russia’s Foundation for Advanced Research Projects, the equivalent of the U.S.’s DARPA responsible for the development of emerging military technologies, are developing a UAV for use in the Arctic capable of staying aloft for four days, the country’s TASS news agency reports. The vessel’s capabilities may include vertical or ultrashort takeoffs and landings.

Adapting technology for the Arctic

Russia’s vessels are specially adapted to navigating without the use of global satellite-based navigation systems which are often unreliable in the polar regions. For that purpose the drones use a newly developed system, named GIRSAM system, when GPS and GLONASS are not available.

The drones are capable of identifying and gathering information about ships up to 100 kilometers away and their primary function will be to ensure “safety of sea shipping and round-the-clock protection of the perimeters,” explains Kalashnikov Group CEO Vladimir Dmitriyev. He further added that the “ZALA Arctic series UAVs are capable of successfully solving civil and military tasks in conducting research in the Arctic zone, and ensuring maritime safety” and are part of a complete system for monitoring Russia’s Arctic coast and territorial waters.

For this purpose the drones contain a 24 megapixel photo camera, infrared imaging technology and a 60x zoom video camera. With that the drones will be able to identify the name, size, course and speed of vessels it encounters. The batteries and other electronics are specifically shielded against Arctic temperatures to ensure more than four hours of operational use. The drones can be used to transmit information about ice conditions, a feature likely to become increasingly valuable as shipping along the route continues to grow rapidly.

More (military) technology for the Arctic

The developments follow a pattern of upgrading and reopening Russian security installations throughout the Arctic along the NSR. In 2017 Russia opened Trefoil military base on the Franz Josef Land archipelago and another base recently opened in the Laptev Sea near the town of Tiksi. The new drones may be controlled from such permanent installations, but can also be operated from specially developed all-weather modules based on 20-foot marine shipping containers.

And while Russia’s and Canada’s efforts are the most public examples, the U.S. likely remains the leader in terms of UAV technology.

“All three countries United States, Canada, and Russia have recognized the need to develop UAVs for operations in the Arctic. The Americans are probably the real leaders in the development and usage overall of UAVs and probably have taken some steps to be able to deploy them to the unique circumstances of the Arctic but their efforts are not as well known as what the Russians are now doing,” states Huebert.

It is also important to look beyond the skies above the Arctic, as Autonomous Underwater Vehicles (AUV) may soon travel through the waters of the Arctic Ocean. “The other issue that no one is talking about at this point that will start to become an important issue in the Arctic is a use of AUVs. The development of such systems will be of critical importance for operation in the Arctic as the Russians continue to expand their submarine fleet and if the Chinese begin to develop and deploy submarines of their own with an under-the-ice capability,” concludes Huebert.

This article originally appeared at the High North News and Arctic Today and is reprinted with permission.