Canada committed to eliminating hepatitis C. Three years later, where is the action? 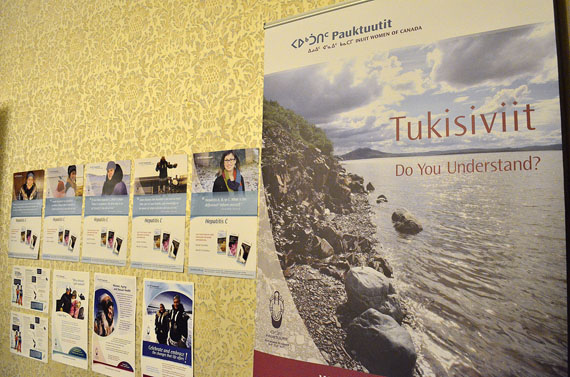 Laurie Edmiston, executive director of CATIE, calls for a coordinated action plan from all levels of government to eliminate hepatitis C. Here are some of the posters that Pauktuutit developed as part of its hepatitis C awareness campaign in 2016. (Photo by Jim Bell)

Hepatitis C is a serious viral infection that affects more than 220,000 Canadians. A person can live with the virus for 20 to 30 years before symptoms start to manifest, which is both a blessing and a curse. Because it can go undiagnosed for so long, hepatitis C can cause serious damage to the liver, and if left untreated, even death.

With 44 per cent of hepatitis C cases undiagnosed in Canada, we are sitting on a ticking public health timebomb. Undiagnosed cases can lead to more severe health problems down the road—liver damage, cancer and fatalities—resulting in an even greater burden to our public healthcare system.

Thankfully, there are now medications that cure more than 95 percent of people with hepatitis C. These newer treatments are more effective, shorter in duration, and carry fewer side effects than the previous generation of medications. And as of last year, they are accessible through public health insurance plans in every province and territory across Canada.

The feasibility of curing every Canadian with hepatitis C has opened up the possibility that we could actually eliminate the virus as a public health threat. In 2016, our government joined 193 countries around the world signing on to an international commitment to do just that by 2030. Many of these countries leapt immediately into action.

Egypt, which has the unfortunate distinction of leading the world in cases of hepatitis C, now boasts the highest number of people cured of the infection. Their progress has been so remarkable that they have set their own ambitious target to eliminate hepatitis C by 2020, a decade earlier than the rest of the world.

Australia pioneered a universal treatment strategy that expanded access to treatment through cooperation with the pharmaceutical industry, and expanded treatment delivery from liver specialists to primary care physicians in order to cure more people, more quickly.

Australia has also invested resources and support into harm reduction and other services for people who use drugs, preventing new infections and re-infections after a person is cured. The country is on track to meet its elimination targets in 10 to 15 years.

Other jurisdictions have taken a micro-elimination approach to meet their targets. This involves eliminating hepatitis C in specific geographic areas, populations, age groups or settings. One prison in Spain, El Dueso, virtually eliminated hepatitis C through a “test and treat” program and by offering harm reduction services such as a needle and syringe program.

Our federal government has proposed a framework to eliminate hepatitis C, among other bloodborne infections. But with health care falling under provincial jurisdiction, the only way to turn these words into action is through a coordinated (and funded) action plan in concert with all levels of government, from coast to coast.

An action plan to diagnose and treat all Canadians with hepatitis C, with tangible targets and funding to back it up, could help us cure these individuals before their healthcare costs start to snowball.

Canada’s leading hepatitis C experts have already laid out the blueprint for such an action plan. Through the Canadian Network on Hepatitis C (CanHepC), they have published a comprehensive document that outlines proven approaches from Canada and abroad to help scale up the prevention, diagnosis and treatment of hepatitis C.

The Blueprint to Inform Hepatitis C Elimination Efforts in Canada is a menu of options for decision-makers to develop their own action plans, tailored to the context and needs of their regions, to ensure we meet our commitment to eliminate hepatitis C once and for all.

With a simple and effective cure at our disposal, and a blueprint for action ready to be adopted, all it takes for us to join the other 193 countries committed to eliminating hepatitis C is political will.