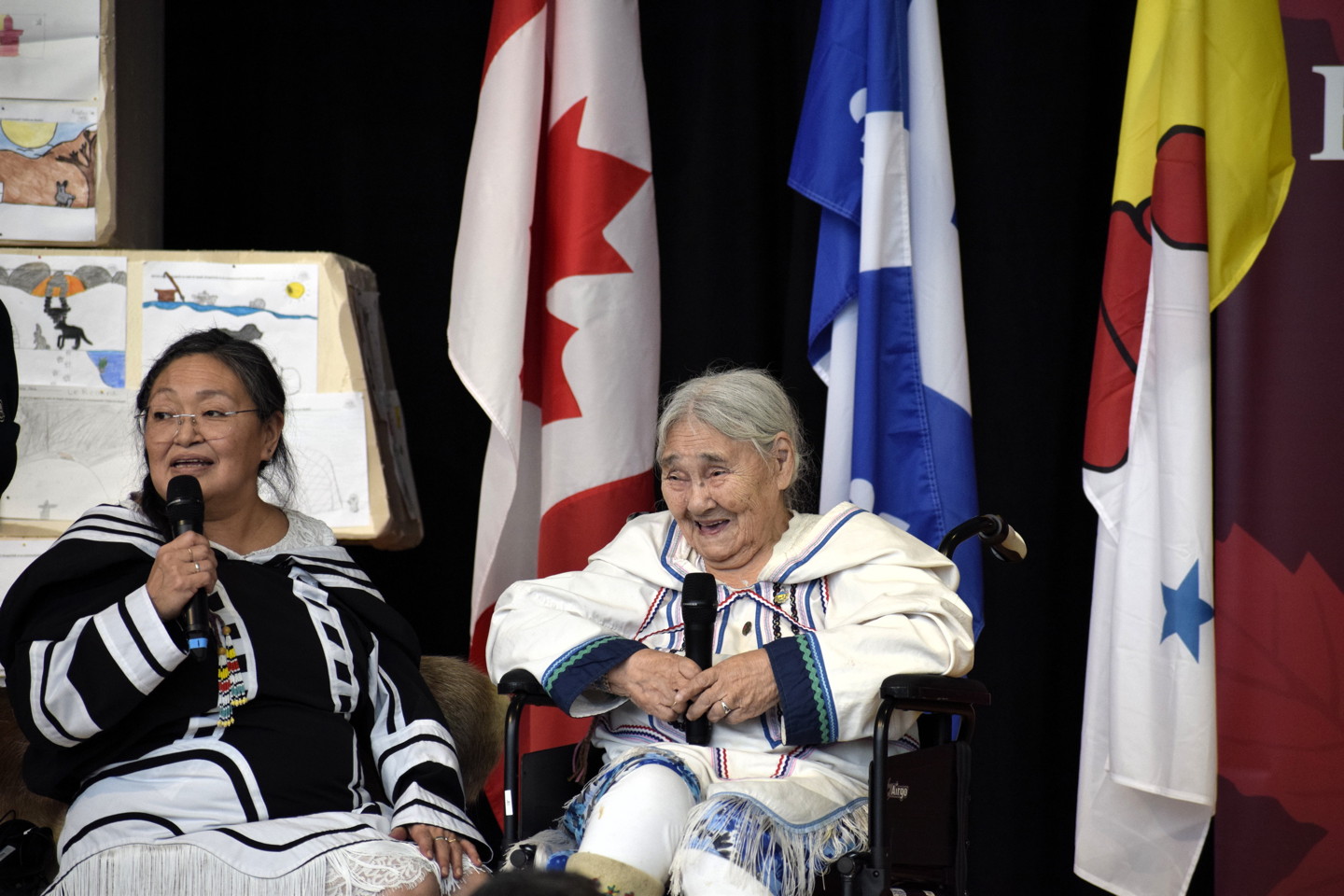 Qapik Attagutsiak of Arctic Bay, 99, with her daughter, Kataisee Attagutsiak, at the Canadian Museum of Civilization on Monday, Jan. 27, where Parks Canada honoured her for contributions she made during the Second World War. Behind them, on the left side of this photo, there’s a large inuksuk display that’s covered with drawings done by local school children. (Photo courtesy of Parks Canada)

The Second World War was already well underway in 1940, when Qapik Attagutsiak, then aged about 20 and living at a camp in the Igloolik area, first heard about it from a Roman Catholic priest.

“We were afraid that our husbands would be killed if they encountered anyone who had jumped from an airplane. We would think that they will never come back,” she said, in a transcript of an interview that Parks Canada did with her in 2018 and translated into English.

That year, the federal government ordered that Inuit in the eastern Arctic should start gathering animal bones for use in war-related industries, part of a nationwide effort that began with the passage of the Department of Munitions and Supply Act on Sept. 10, 1939, Parks Canada said in a backgrounder.

During that campaign, people across Canada salvaged bones, fats, metal, rags, paper and rubber products through a public campaign led by the Department of National War Services.

The bones were an ingredient in the manufacture of cordite, an explosive substance used in artillery shells, as well as for aircraft glue and fertilizer. 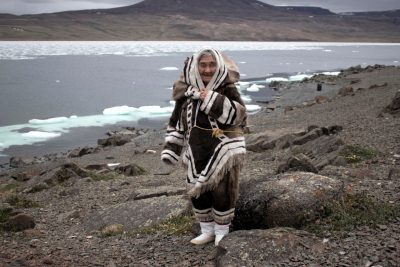 Qapik Attagutsiak near her home in Arctic Bay. (Photo courtesy of Parks Canada)

Attagutsiak, who now lives in Arctic Bay, will turn 100 this June. She’s the last surviving person known to have participated in the Arctic bone-collecting effort, Parks Canada says.

So Parks Canada and the Canadian Armed Forces, through the Hometown Heroes project, held an elaborate ceremony at the Canadian Museum of Civilization on Monday, Jan. 27, to honour Attagutsiak and other Inuit who contributed to the war effort.

In her interview with Parks Canada, Attagutsiak said the first bones she helped collect were from the remains of her family’s dog team, which died of disease when the family was camping at a walrus hunting area called Qaiqsunik, off Foxe Basin.

She said her late grandfather, a man called Ullalaaq, a leader at that time in the Igloolik area, was the person who packaged the bones.

“We younger people would bring the remains to him; our grandfather would package them into a mesh sack,” she said in the transcript of the Parks Canada interview.

In that interview, she said she remembers filling three 125-pound bags a day for one week.

Those bags were loaded onto small boats for transfer to the RMS Nascopie, the famous steamship that the Hudson’s Bay Co. used to resupply its posts in the eastern Arctic.

It all stopped when the war ended in 1945. “We immediately stopped thinking about it,” Attagutsiak told Parks Canada.

Attagutsiak has made many other contributions, especially as a midwife and as a Canadian Ranger, having joined up in 1947 when the Rangers were founded.

She was born on June 11, 1920, at a place called Siuraq, located between Igluligaarjuk (Chesterfield Inlet) and Coral Harbour, in the Kivalliq region.

“Her father, Quliktalik, was a skilled hunter and her mother, Pakak, was a seamstress; both were leaders in their community,” Parks Canada said.

At around age 18, Qapik married a man called Attagutsiak, who was from the Netsilik region, had 14 children with him, and adopted two more children after her husband died in 1984.

As a midwife, she helped deliver hundreds of babies and helped set up the Akausivik Inuit Family Health Team and Medical Centre in Ottawa, and she has been awarded the Queen Elizabeth II Diamond Jubilee Medal.

The Hometown Heroes program, which started in 2015, commemorates people who made contributions to Canada during the First World War and the Second World War.

More than 140 Canadians have been honoured this way, Parks Canada says.