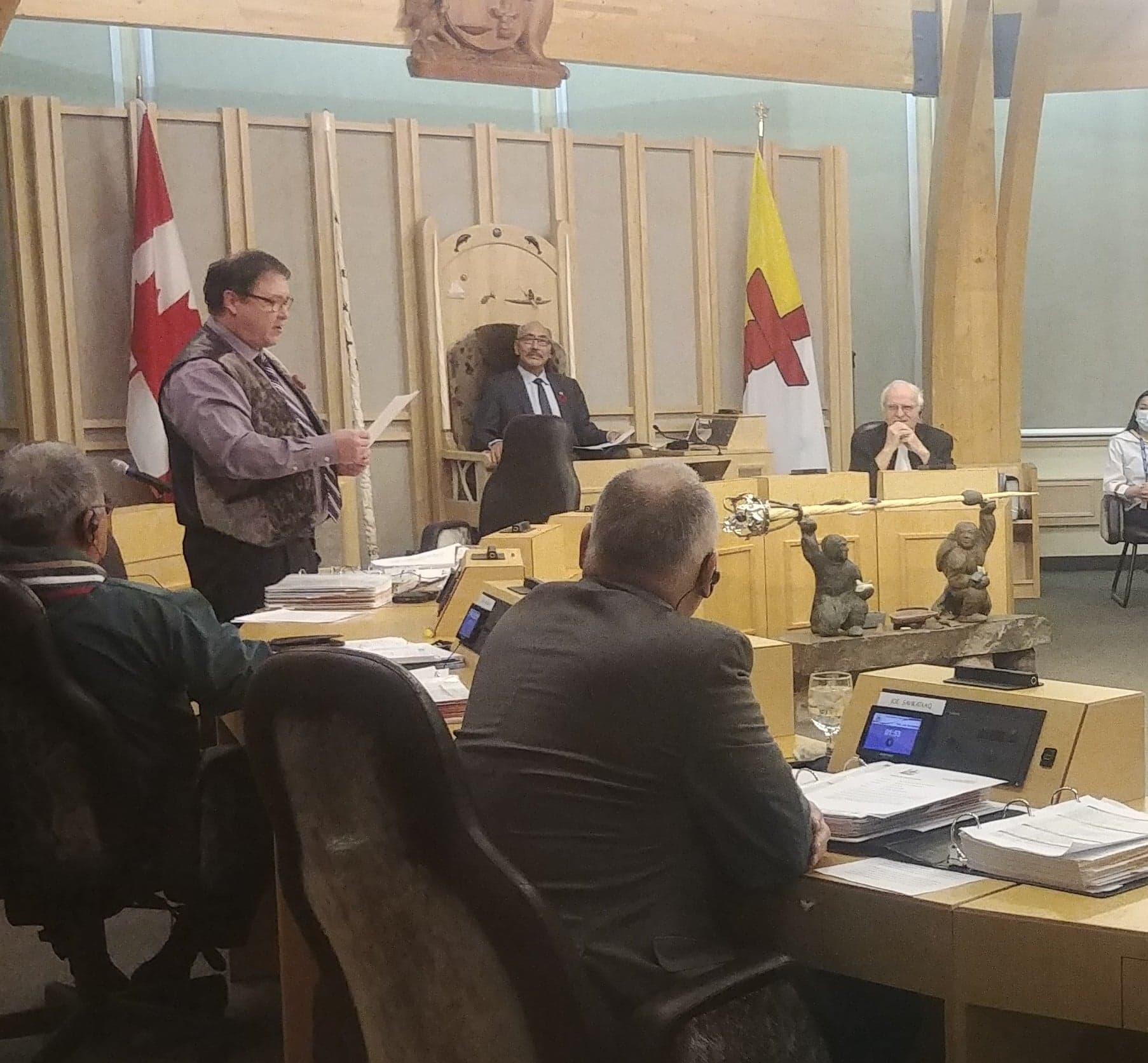 “I think this is a massive step forward for policing oversight across Nunavut,” Justice Minister George Hickes told the legislature Monday as Bill 53 received its third reading. (File photo by Meagan Deuling)

The federal government is increasing the amount it pays for medical travel and medevac flights for beneficiaries of its Non-Insured Health Benefits program in Nunavut to $715 per flight from $125 per flight, territorial cabinet minister George Hickes says. The program covers some costs not paid for by the Nunavut Health Care Plan.

Canada also paid Nunavut’s Department of Health $58 million, said Hickes, who was the minister of health when he announced the new deal and funding in the legislature last week.

(Hickes has since become the minister of justice and is still minister of finance. Lorne Kusugak was appointed as health minister in a cabinet shuffle that took place after the funding announcement on Friday, Nov. 6.)

That money will go toward the costs of preparing for COVID-19 and offset the cost of medical travel, Hickes said.

The Government of Nunavut will continue negotiating with the federal government in December to have it cover the full cost of medical travel and medevac flights for non-insured health beneficiaries, as well as the costs of administering the program, starting on April 1, 2021, Hickes said last week.

He expects the deal to be finalized by the end of the year.

“This isn’t a short-term effort,” Hickes said of the negotiations. “Originally, there were discussions on this back in year 2000 from our government.”

Last year, the GN paid $78 million in scheduled medical travel and medevac flights, Hickes said, and got back around $3.8 million from the federal government.

He estimates that, with the increased copayment amount through the new agreement, the GN could get back around $20 million from the federal government this year.

At the time, Hickes said Canada owed Nunavut the money the GN had spent on medical travel and medevac flights over the years.

Now, he acknowledges that reimbursement is not likely to happen. Hickes said he “understands the complexities” of asking a government to reimburse funds from previous fiscal years, but said he still doesn’t like that Nunavut won’t get that money back.

That’s because the Non-Insured Health Benefits is a federal program, and under it, the federal government is supposed to pay the costs of medical travel and medevacs.

“Any recognition of our previous expenses into the Non-Insured Health Benefits program I found was unjust, so this at least acknowledges and brings us up to what we spent last year,” Hickes said.

The reason the federal government hasn’t lived up to its end of the agreement until now is because of a lack of understanding of the cost of travel in Nunavut, he said.

“I still find every time we meet with our federal colleagues there’s still that education component, what life in Nunavut truly is,” Hickes said.

Having Canada pay the full cost of medical travel and medevac flights for non-insured health beneficiaries will give the GN more flexibility to provide health services, and make sure care levels are equitable to the rest of Canada, Hickes said.

“We understand that medical transportation is a necessary but costly element for Nunavut’s health care system,” said Adrienne Vaupshas, a spokesperson for Indigenous Service Canada, in an email.

The increase from $125 per leg of a medical flight to $715 is a “response to rising costs in medical transportation,” Vaupshas wrote.

Discussions between the two governments about Canada covering the full cost of all medical travel flights are ongoing, Vaupshas confirmed.