The HMCS Harry DeWolf — the first of a new class of Arctic patrol ship — visited Greenland and Alaska, and sailed through the Northwest Passage 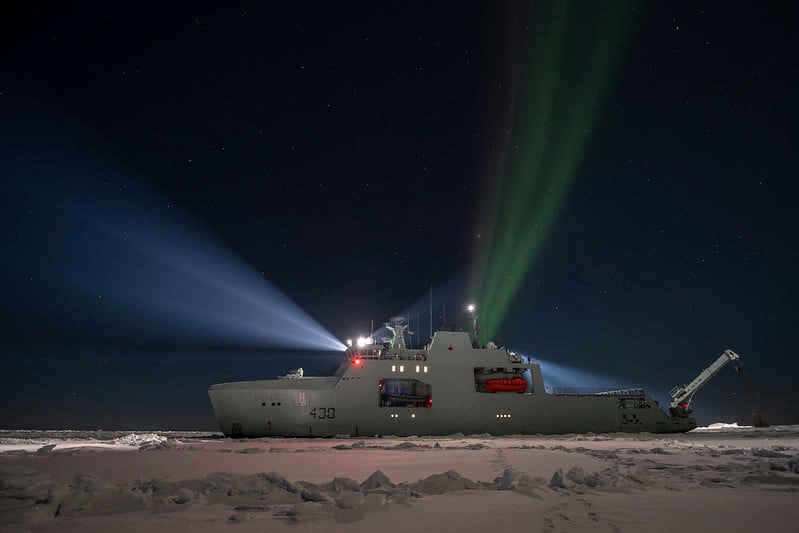 The Royal Canadian Navy’s offshore patrol vessel HMCS Harry DeWolf returned to its home port of Halifax on Dec. 16 after completing a circumnavigation of North America, including through the Northwest Passage. (Photo courtesy of the Canadian Armed Forces/Facebook)

The Royal Canadian Navy’s Arctic and offshore patrol vessel HMCS Harry DeWolf returned to its home port of Halifax on Thursday, after circumnavigating the North American continent on its first voyage.

The ship is the first of a series of such vessels designed to operated in the icy waters of the Arctic as well as in other environments. It was delivered to the Canadian Navy last year, and commissioned this summer.

It sailed through the Northwest passage becoming the first Canadian Navy ship to do so since 1954, according to Canadian Naval Review.

[US, Canada conduct a joint Arctic search-and-rescue exercise in Nunavut]

The Harry DeWolf visited Iqaluit in August, where it was present for joint U.S.-Canada coast guard exercises, and also visited Nuuk, Greenland, before sailing through the Northwest Passage and stopping in Unalaska, Alaska.

The Seattle-based U.S. Coast Guard Cutter Healy, also transited the Northwest Passage this summer — though in the opposite direction — completing its own circumnavigation of North America.

This article was originally published by Arctic Today and is republished with permission.