“The Northwest Passage is part of Inuit Nunangat, our Arctic homeland” 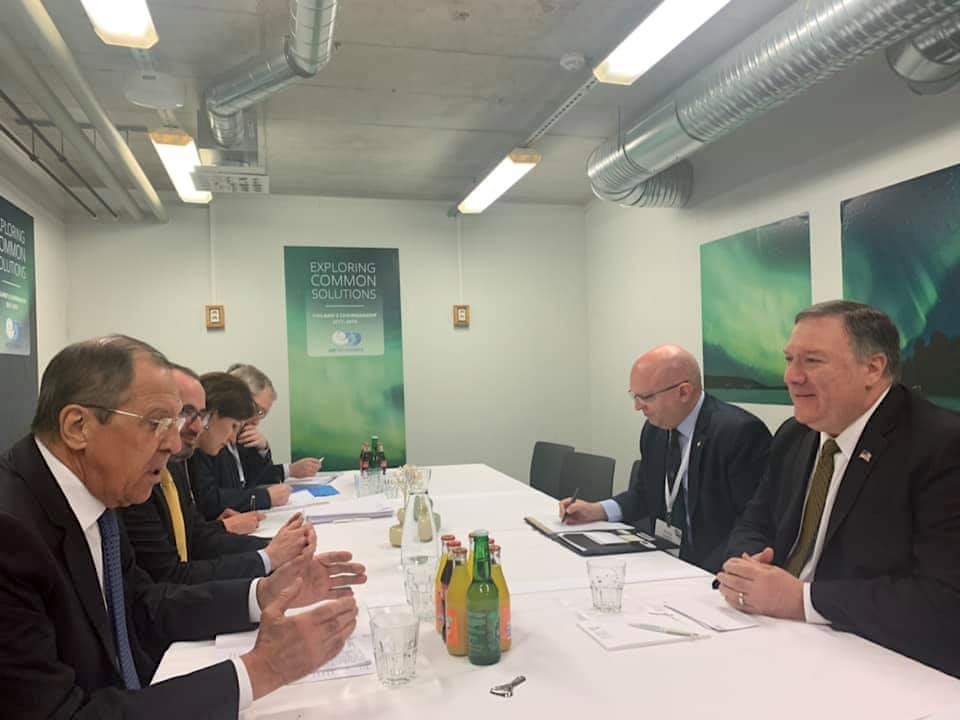 Russia’s foreign minister, Sergey Lavrov, at left, speaks with the U.S. secretary of state, Mike Pompeo, outside the Arctic Council ministerial, held May 7, in Rovaniemi, Finland. The two hold opposing views on who controls Arctic waterways, such as the Northern Sea Route above Russia, with the U.S. implying Russia’s control of the Arctic seaway is illegal. The Inuit Circumpolar Council has also come out against Pompeo’s statements about the Northwest Passage, which he also maintains is an international waterway. (Photo courtesy of the Russian Foreign Ministry/Twitter)

The Inuit Circumpolar Council–Canada is pushing back at U.S. Secretary of State Mike Pompeo’s assertion that Canada’s claim to the Northwest Passage is “illegitimate.”

“The U.S. has a long-contested feud with Canada over sovereign claims through the Northwest Passage,” Pompeo told reporters May 6, the evening before the Arctic Council’s meeting in Rovaniemi, Finland, which all eight circumpolar foreign ministers attended. 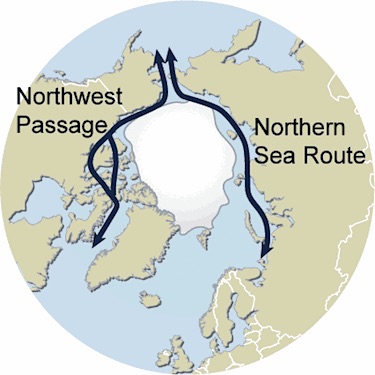 This image shows the Arctic routes which the U.S. maintains are international waterways. (File image)

Pompeo’s statement about the Northwest Passage prompted the ICC to reaffirm Canada’s sovereignty over the waterway through High Arctic islands.

Canada’s position has long been that the passage is internal and any country that wants to pass through needs permission, but, more than that, “the Northwest Passage is part of Inuit Nunangat, our Arctic homeland,” said Monica Ell-Kanayuk, President of ICC Canada, in a May 8 news release.

Canadian sovereignty is based on Inuit-Crown land claims agreements as well as more than 4,000 years of Inuit land use and occupancy throughout the region, Ell-Kanayuk said.

She also said the U.S. position goes against the United Nations Declaration on the Rights of Indigenous Peoples, which states that “Indigenous peoples have the right to the lands, territories and resources which they have traditionally owned, occupied or otherwise used or acquired.”

Ell-Kanayuk also pointed to ICC’s 2009 Circumpolar Inuit Declaration on Sovereignty in the Arctic, which states that, besides an inherent right to self-determination, Inuit have gained rights through international law, land claims and self-government processes.

That declaration also talks about the development of international institutions in the Arctic and Indigenous peoples’ organizations.

“These new forms of governance must transcend Arctic states’ agendas on sovereignty and sovereign rights and the traditional monopoly claimed by states in the area of foreign affairs,” she said.

Inuit are currently working with Canada on the development of an Arctic Policy Framework, which will include a regime for co-managing the Northwest Passage.

“This will include coordinated action to ensure sustainability, safety and security, as well as healthy communities across the Canadian Arctic,” she said.

The ICC also condemned the U.S. refusal to support an Arctic Council declaration at the end of the ministerial that would have mentioned climate change.

Pompeo declares “a new age of strategic engagement” has begun

The lack of support for the common declaration and the challenge to Canadian sovereignty over the Northwest Passage weren’t the only provocative stances adopted by the U.S. Secretary of State in Finland.

On May 6, Pompeo also suggested that the Arctic Council needs to focus more on “threats to the Arctic and its real estate.”

“In its first two decades, the Arctic Council has had the luxury of focusing almost exclusively on scientific collaboration, on cultural matters, on environmental research—all important themes, very important, and we should continue to do those,” Pompeo said May 6.

“But no longer do we have that luxury of the next hundred years. We’re entering a new age of strategic engagement in the Arctic, complete with new threats to the Arctic and its real estate, and to all of our interests in that region.”

In those same remarks, Pompeo honed in on Russia’s claim over what he called “the international waters of the Northern Sea Route.”

“In the Northern Sea Route, Moscow already illegally demands other nations request permission to pass, requires Russian maritime pilots to be aboard foreign ships, and threatens to use military force to sink any that fail to comply with their demands,” Pompeo said.

“Under President Trump, we are fortifying America’s security and diplomatic presence in the area.”

That’s despite Russian Foreign Minister Sergey Lavrov’s mild comments at the Arctic Council ministerial that “we are open to the broadest possible co-operation in the Arctic where, as we have repeatedly noted, there are absolutely no pretexts for conflicts or attempts to address any issues arising here with a military response.”

Ell-Kanayuk also condemned Pompeo’s characterization of the Arctic as a place of geopolitical and military competition.

“Geopolitical differences in the Arctic have always been resolved peacefully. Indigenous peoples living in the Arctic are integral to its international institutions and decision-making that has achieved this,” she said.