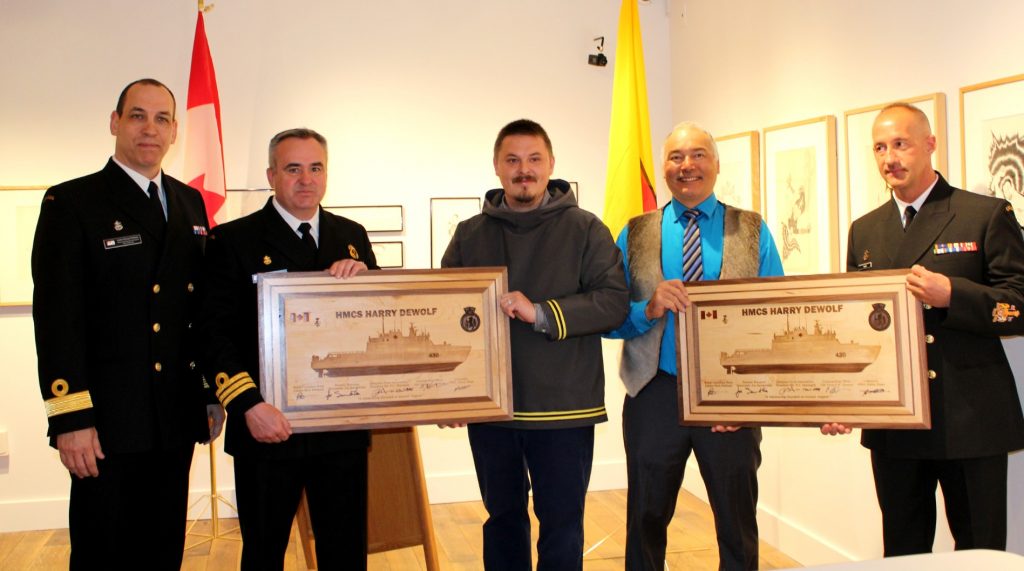 There will be a new Royal Canadian Navy vessel sailing through the territory’s Qikiqtani region in 2020.

The HMCS Harry DeWolf is the first of the Royal Canadian Navy’s six new Arctic Offshore Patrol Ships to launch. Although the ship will not sail the region’s waters until next year, Corey Gleason, the ship’s commander, formally recognized the affiliation between the ship and the region’s communities at an announcement on Monday morning in Iqaluit.

Affiliation is a long-standing naval tradition that connects communities with ships and crews in the North through an exchange of ideas, knowledge and experience, according to a news release.

The 103-metre ship will have 65 crew, rescue boats and a helicopter detachment, and will be able to transport pickup trucks, ATVs and snowmobiles.

Gleason said although the ship has not yet set sail, affiliation with the region’s 13 communities will begin “today.”

“It’s just beginning the discussion. And not us driving the relationship but really figuring out what the communities and the regions want to do with this,” he said.

“Inuit are coastal people. There are 13 communities in this resilient region and they’re all coastal communities…. So as coastal people Inuit have a vested interest in the operations as well as the duties of the navy ships deployed in Inuit Nunangat,” said QIA president P.J. Akeeagok.

“Today’s announcement is an opportunity to build stronger and more dynamic connections for the progress of Nunavut and its people,” Savikataaq said.

Gleason said he has “ambitious plans” for the ship, including the creation of naval rangers, much like the programs offered by the Canadian Armed Forces.

“We would have some of those folks come on board the ship and don a uniform and work onboard and join the crew,” he said.

He said a long-term goal would be to have someone from one of the territory’s communities eventually command one of the six ships.

“It’ going to take some time,” he said. “We’re really just starting from scratch and having a conversation.”

“Qikiqtani communities want to be aware of what’s happening in the name of Canadian sovereignty and what’s happening in our backyards. Cooperative efforts like today’s announcement signal a change in attitude as well as an openness of dialogue and cooperation,” Akeeagok said.

Over the next several years, the six ships and their crews will visit communities during routine operations in Canada’s northern waters.